Wigan-born Billy Blan was one of three brothers who played professional rugby league, but Billy was the only one to win a full cap with Great Britain. In fact, he played three tests against the touring Kiwis in the 1952-52 season.

Billy played most of his 255 games for Wigan at loose forward and scored tries regularly. His best season for scoring was the 1949-50 season when he crossed the line a total of 34 times, including four tries in one match against Liverpool Stanley. Billy’s 34 tries was a record for a forward. He had a good pair of hands and his never say die attitude meant he was never far away from the action.

Billy joined the Club from the RAF straight after the Second World War and won a Championship Medal in his first season. In his Wigan career, Billy won two cup winners medals and five Lancashire Cup winners medals. Billy left Wigan in 1953 to join Leeds and moved to St Helens to finish his playing career.

He worked in the Pools office after his playing days were over and in 1999 was honoured by being voted into the Wigan Rugby League Clubs Hall of Fame, and was given a great reception by the fans as he received his award at the Gateshead game. 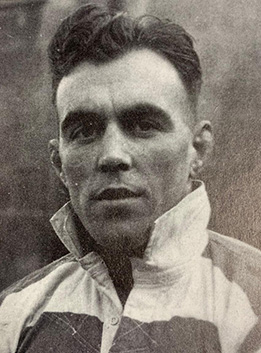