After an illustrious 19-year career with his hometown club, Sean O’Loughlin is now assistant coach for the first team.

O’Loughlin played 459 games and won ten major honours with Wigan. The one-club man and captain hung up his boots at the end of his 19th season as a Rugby League professional in 2020.

Revered by colleagues and opposition players with many pointing to him as one of the modern greats, O’Loughlin has been one of the most respected, consistent and inspirational players of the Super League era and captain of both club and country.

He led the Club to its first major titles in eight years, winning the League Leaders’ Shield and the 2010 Super League Grand Final, before going on to win another eight major honours, including the 2013 double and the historic World Club Challenge title in 2017. O’Loughlin was named in the Super League Dream Team a record seven times. 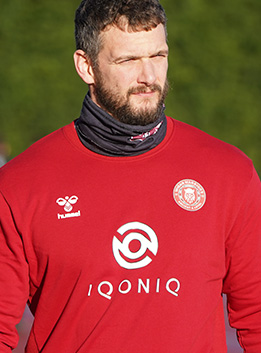