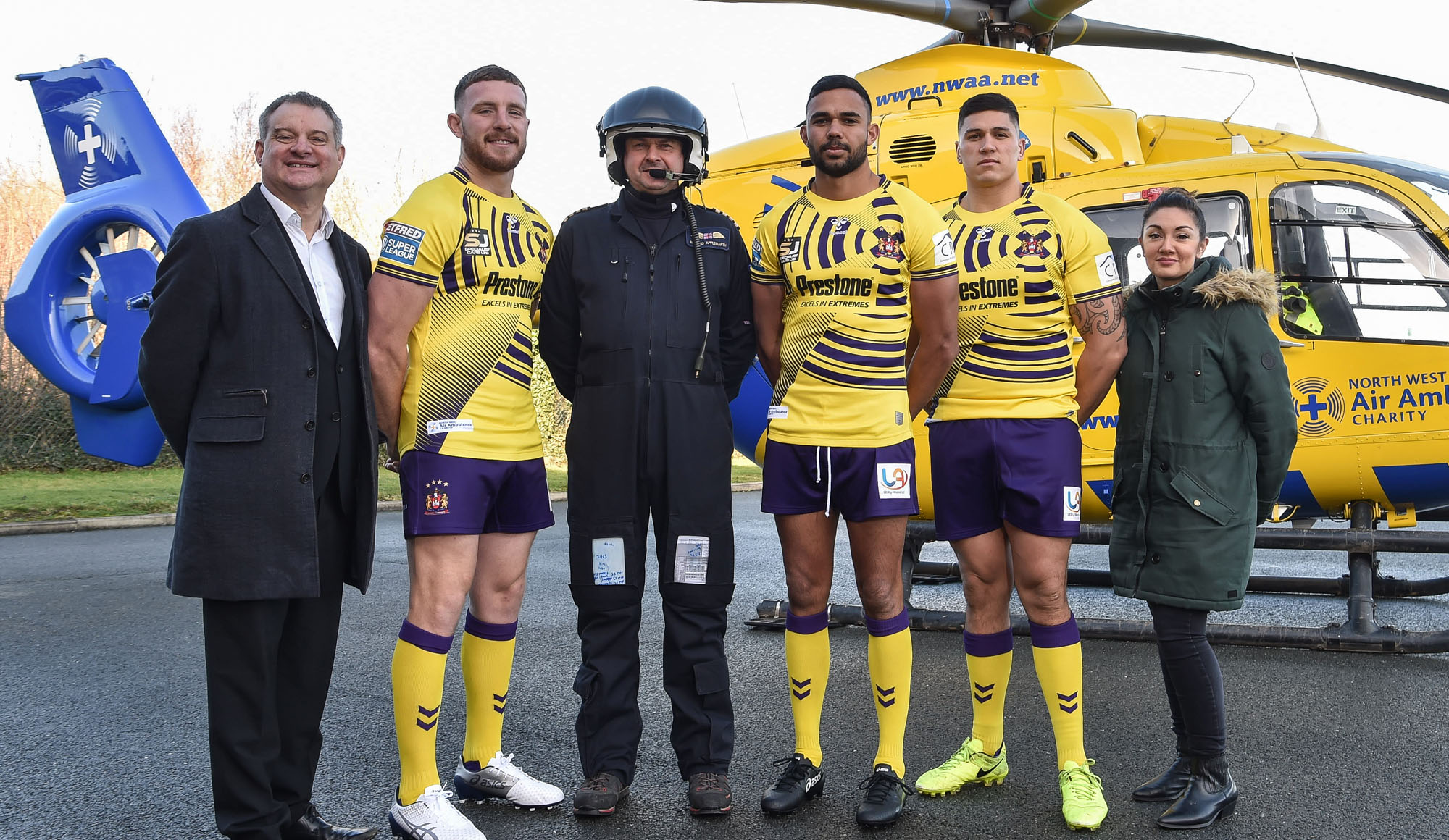 Wigan Warriors are delighted to announce the release of their 2020 alternative shirt to show the Club’s support of North West Air Ambulance Charity (NWAA).

The charitable organisation provides helicopter emergency medical service that covers the North West England region, consisting of the counties of Cheshire, Cumbria, Lancashire, Greater Manchester and Merseyside - in fact they have been called to many a Rugby League pitch to assist amateur players injured amongst the wide range of emergencies they get.

As the excitement for the upcoming 2020 Betfred Super League season continues to gather pace, the Warriors, in partnership with Principal Club Partner Prestone, have released the specially-designed hummel limited-edition shirt to raise awareness of the superb work of the charity. The Club will also be donating £5 from the sale of every shirt to North West Air Ambulance Charity, with the yellow and purple shirts also incorporating a helicopter blade design as well as including NWAA’s charity logo.

The team will then wear the shirts at this year’s Dacia Magic Weekend fixture against Warrington Wolves at Newcastle’s St James’ Park Stadium on Sunday May 24th and other selected away fixtures.

The shirt will be available after February 5th in-store at Warriors World, situated in Wigan’s Grand Arcade shopping centre, and online at https://store.wiganwarriors.com/. 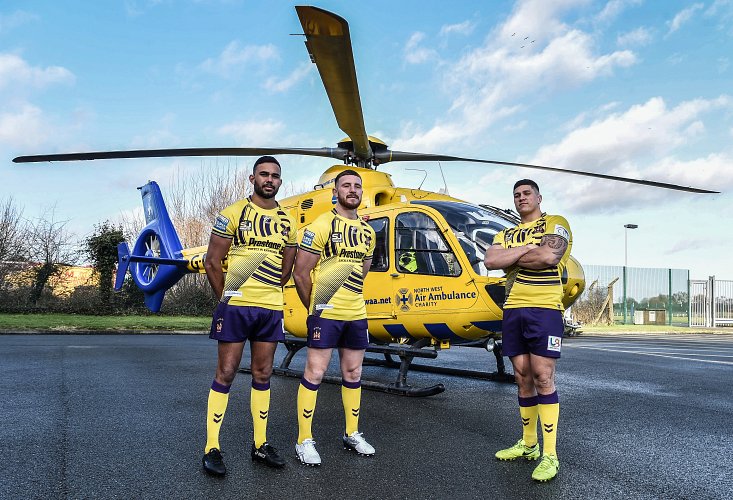 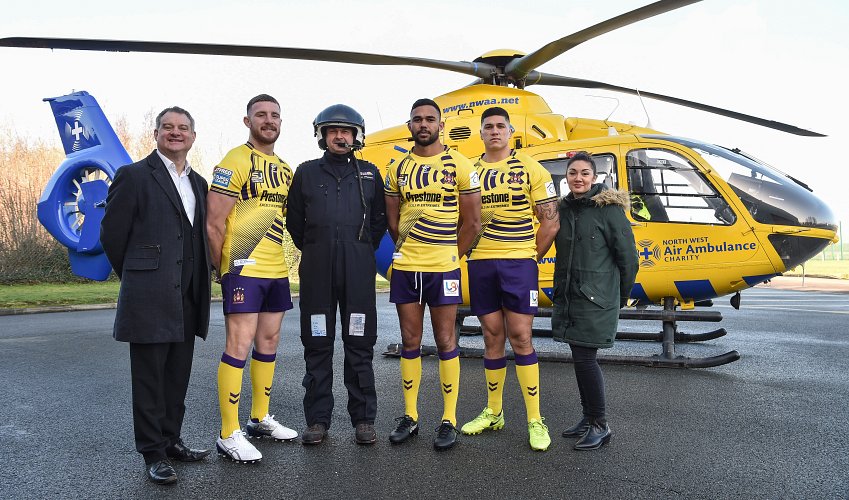 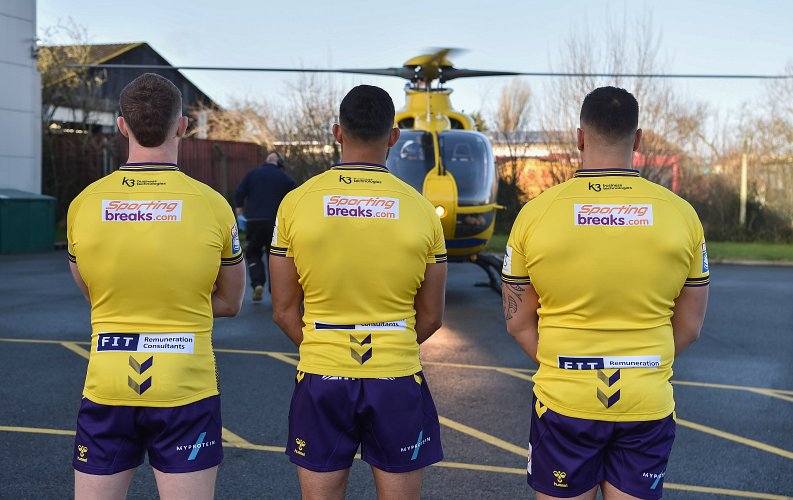 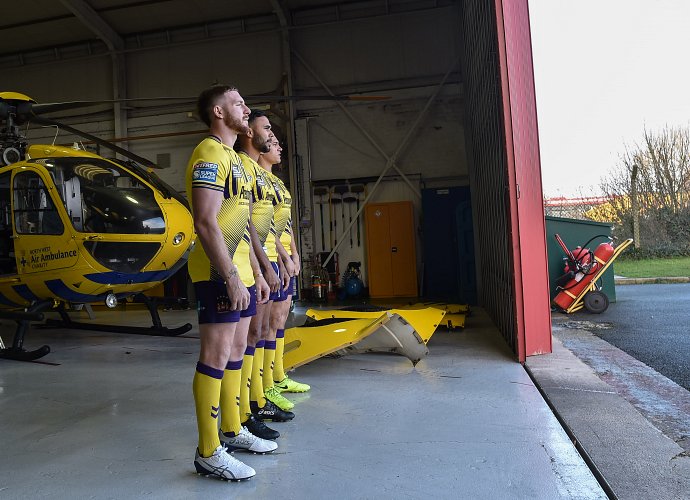 “When we spoke to them during this process we were shocked to hear that they (NWAA) need to raise over £9 million a year to keep this vital service in action, so hopefully this shirt will not only bring the organisation some welcome money to the organisation but also raise awareness that NWAA is indeed a charity that depends on the generosity of the public.

“We’d also like to thank the team at hummel and Prestone for their input into the design process, as we feel that this shirt will go down positively, much like the release of our home and away kits already have in 2020.”

Jackson Hastings, Wigan Warriors half-back: “What these guys (NWAA) do in the community is great - they save lives, help people out and work really hard. It’s a natural fit for Wigan, as we work hard on the footy field and try to help others in the community.

“It’s an honour to wear a kit that is dedicated to them. They are the real heroes and it’s great to link up with them for a special partnership.

“I really like it - it’s completely different to what we are used to and I’m really looking forward to playing in it.”

Jon Ward, Head of High Value Giving, North West Air Ambulance Charity: “We are delighted to partner with Wigan Warriors for the coming season, which coincides with our 21st birthday – we can’t think of a better way to celebrate! The Warriors and their partners have been fantastic to work with when creating the shirt, and it’s great to bring together two iconic North West teams – the Warriors and our air ambulance crews – who both work so hard to support local people.

“As a charity, we receive no government funding and rely entirely on public donations to keep us in the air and saving lives. Five pounds from the sale of each limited edition North West Air Ambulance Charity shirt will go directly to supporting the fantastic work of our crew and charity, so we encourage any fans to invest in the new kit! Of course, our thanks go to Wigan Warriors and their supporters for their wonderful generosity – they are truly helping to save lives across the region.”

Head of Marketing for Holt Lloyd International, Claire Fenton added: “The team at Prestone are delighted to be able to support Wigan Warriors and North West Air Ambulance Charity in this fantastic initiative.

“We look forward to working with both parties as they raise money for a worthy cause, whilst cheering on the team in what promises to be an exciting 2020 season.”

Tickets are still available for the Dacia Magic Weekend in Newcastle. For more information, click HERE.