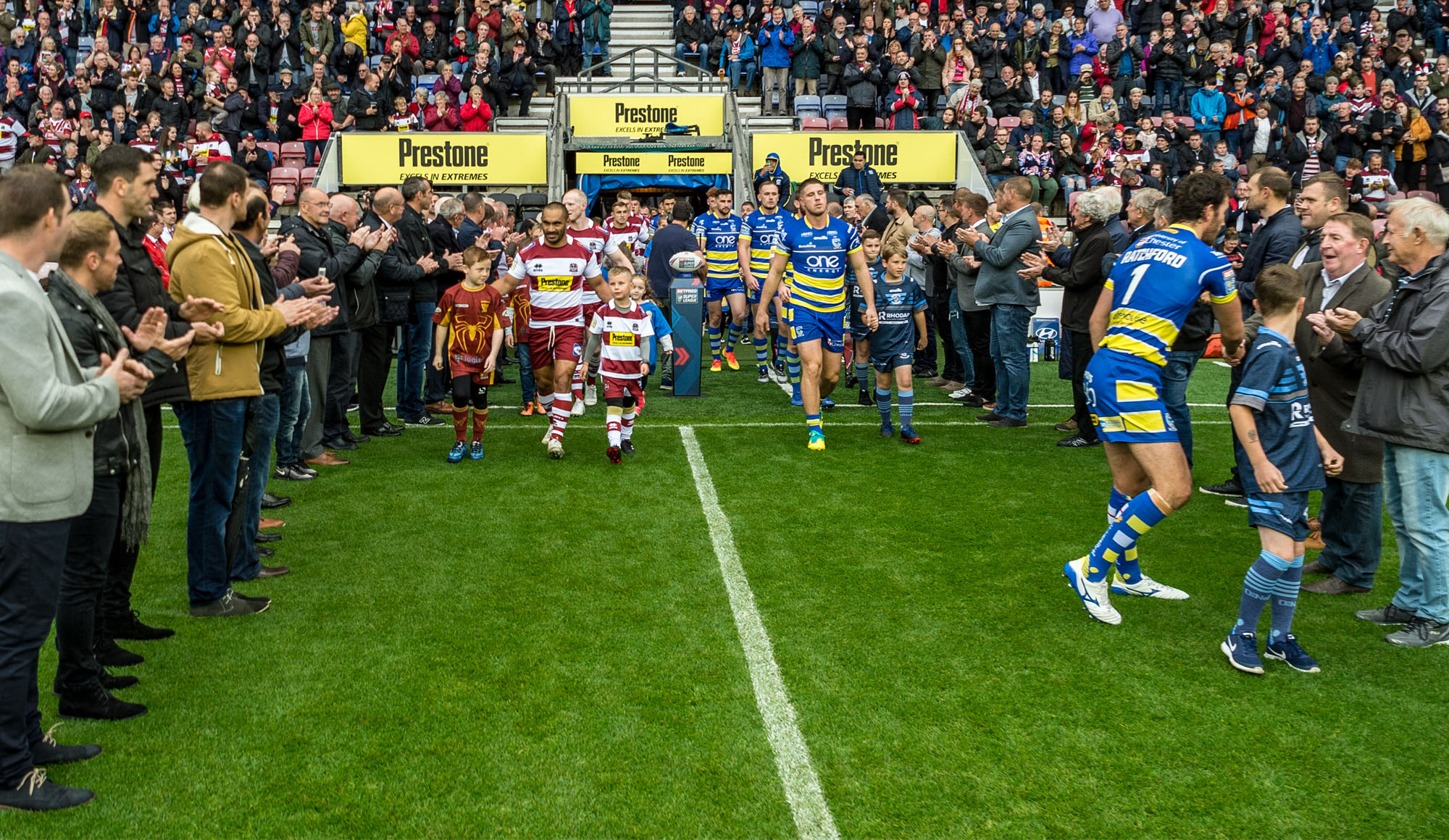 The event sees ex-players, old and young, return to Wigan and provides an opportunity for teammates to be reunited and for fans to show their appreciation.

Wigan Warriors Hall of Fame member, Andy Gregory, says he enjoyed returning to the Club and having a catch up with those whom he played with.

“It’s great to be back, I’m a Wigan lad, born in Lower Ince. It is always nice to come and see a few old faces, it is just good to have a reunion to talk about the past and the future.”

Gregory remembers how much it meant to him and his family when he found out he was joining Wigan.

“It was unbelievable to ring my mam up to tell her that I had signed, you never forget it. I was born a mile away from Central Park and always went down as a kid to watch Wigan play, I always said ‘I’m going to play there’.”

He added: “On my first day I walked down the tunnel and I went into the away teams dressing room by mistake.”

During his time with the Club, the scrum-half won the World Club Challenge, five Challenge Cups and four Championships, among other honours. As well as that, he was also named as the Lance Todd trophy winner in 1988 and 1990.

“That era was unbelievable, we had great players in every position. We all got on and it was like one big family, it was a tremendous team spirit. We gave our all both in training and on the playing field, that time will not be beaten because it was phenomenal. Stepping out on the pitch does bring back memories and it is great to celebrate the heritage of the Club.”

The 58-year-old says his time in the sport is something that means a lot to him.

“I’ve had a great time in rugby league, everyone in life have their ups and downs but it has been good to me. I’ve just been named in the Great Britain Hall of Fame so I can now sit in the Royal Box at Wembley, and I hope to take my mum down.”

Gregory is confident about the future of the current squad for this season and beyond.

“(Adrian) Lam has turned things around from the start of the season and has built confidence, the star players are doing well, and it wouldn’t surprise me if we went all the way. Teams don’t want to play Wigan and with the signings they will be contesting next year.”

He said: “To win the Lance Todd was very very special and magic, I didn’t believe that I would ever do that.”

Something that sticks in the mind of Ashby was being offered the opportunity to play for Wigan.

“It was something I never dream I would do. I was at Liverpool City for eight years and never thought I would join the best ever rugby league club. The highlight is when I got a knock my door from the club secretary and they told me I could be a Wigan player that night, the hairs stood up on the back of my neck.”

Another special moment for the former full-back was marching out at Central Park in Cherry and White for the first time.

“It is a special feeling when you went out on the sacred turf and felt that atmosphere, it was out of this world. To walk that tunnel with that jersey on my back was absolutely magnificent, I can sense it now.”

Ashby still keeps his eye on how the team is performing and passes on advice.

“I come watching the lads every match when they are at home and the nearer games, I don’t miss many, I enjoy it.”

He continued: “The players now have a far better set up than we could’ve ever dreamt of. I give them the advice to listen to their coach intently and to go out on to the pitch and enjoy themselves and not to dwell on mistakes.”

“It is always nice to come back. I still attend home games regularly and bring my granddaughter with me. It good to see the lads I played with and against, the friendships are phenomenal, rugby league is a great community.”

The 71-year-old, who enjoyed two spells with the Club in the 60s and 70s, has many happy memories with the Club and enjoys seeing young local players making the step up.

“I got to make cup final appearances and played along side some great players, during my time we won 31 consecutive games which was amazing to achieve. Getting to see the young players now turning out for this great Club is just brilliant.”

Ashurst believes that every player who has ever featured for Wigan has been important to the Club.

“It’s good to come back and meet some special people. Some have played 400 games; some have played one, but irrespective of how many, the Club exists because of them.” 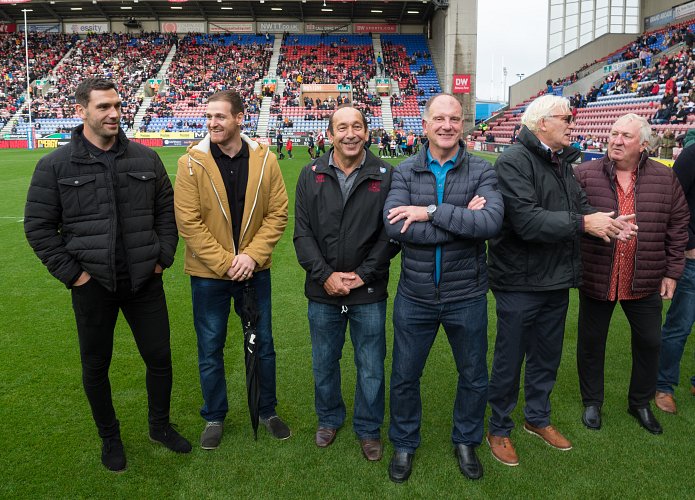 Past players formed a guard of honour before kick-off. 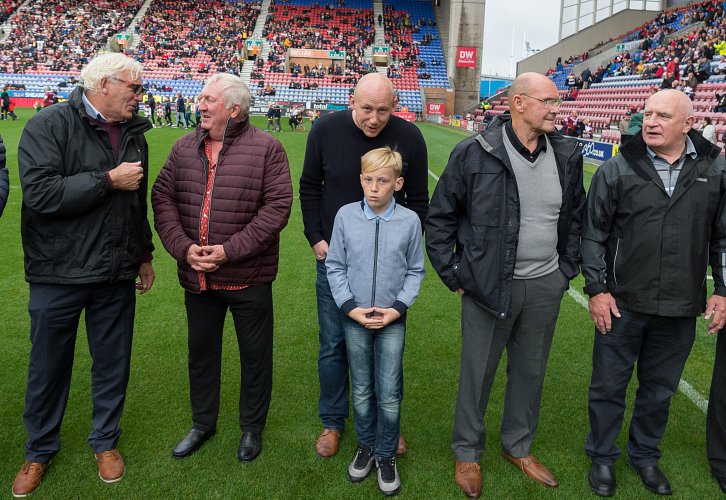 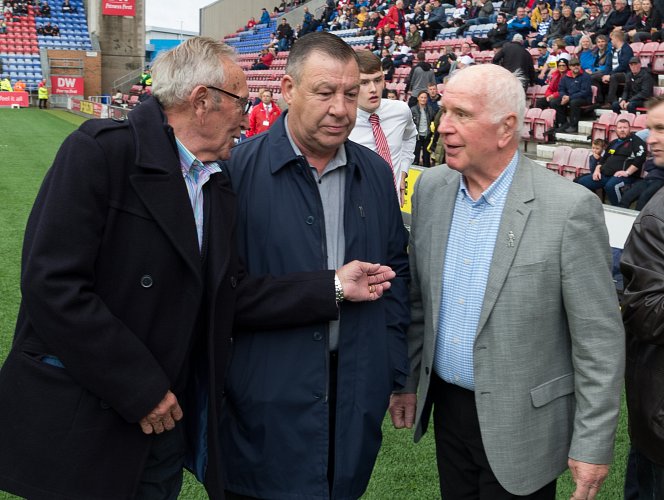 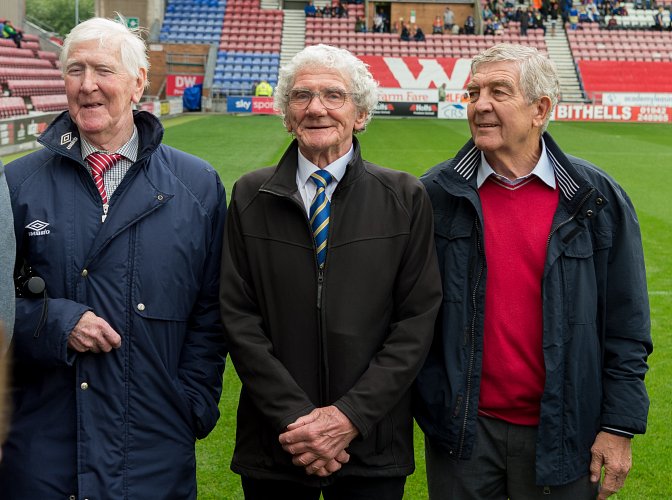 Shaun Briscoe, who played for the Warriors from 2002 until 2003, stated he was ‘proud’ to be a heritage player along side some of the Club’s most esteemed players.

“It is nice to be invited back, looking round the room there are some absolute legends here, who have achieved some special things in the game with the trophies they have won and the records they have set. I am really proud to have a heritage number alongside them.”

Despite working for Warrington now, the 36-year-old is also pleased to return to the Warriors.

“Wigan is my hometown Club and I am extremely proud of where I come from. Nobody can take away that feeling of pulling on that Cherry and White jersey because it does mean a lot to me.”

He continued: “I came back here a couple of times playing against the Warriors, and it was always strange to run out towards the away end.”

Briscoe also relished the opportunity of sharing the moment of being back at the DW Stadium with his son.

“It is good to let him experience the atmosphere and to know what it is like to be part of the Wigan public.”

Stephen Wild, who played for Wigan between 2001 and 2005, was pleased to be back to see old teammates and former players who he grew up watching.

“To chat with players like Andy Gregory, who would’ve inspired a lot of us, is a great experience that most people don’t get. When you see the people you played with, it is as if you have never left, and it reminds me of my youth.”

The 38-year-old was also pleased to be back at the DW Stadium with the crowd cheering the heritage players before kick-off.

“There are not many big stadiums where you can get an atmosphere like that, to get that buzz again is something you can’t replace.”

“The new facilities allows us see what the players have now and see how it has progressed.”

👏 A huge thank you to all the past @WiganWarriorsRL players who came to the game last night to celebrate Heritage Day!

🍒⚪️ Great to see you all! pic.twitter.com/PaT5Ms0SX4