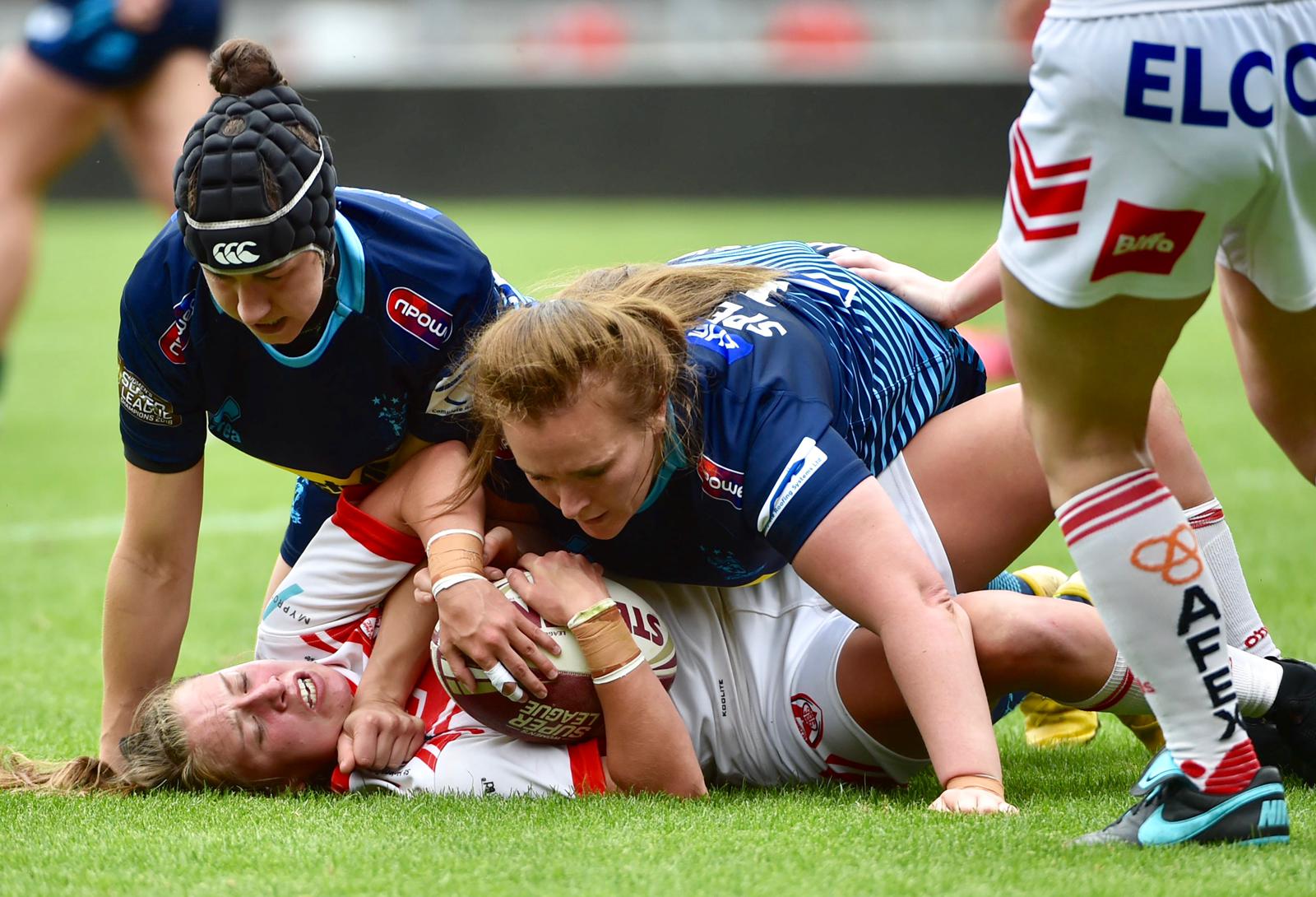 The Warriors got off to the perfect start as Grace Holding crossed in the first minute. Charlotte Foley put a kick to the corner on the last and the ball was allowed to bounce for the young winger to pounce on the opportunity and nudge Wigan into an early 4-0 lead.

Wakefield responded immediately though, in almost similar fashion as a high hanging kick was allowed to bounce in the in-goal area for Saskia Lewis to touch down. The effort converted by Jess Matthews and Trinity had the lead.

Wigan were in again in the 13th-minute; the bouncing ball causing problems yet again from a Foley kick and Burrows picked the ball out of the air to place it over the whitewash.

Full-back Greenfield then scored a fantastic individual effort to put her side further in front. She spotted a gap and raced 70 metres to go in under the sticks, with her pace too much for Wakefield to catch. Foley added the extras and Wigan had a 14-6 advantage.

The Warriors went over for their fourth of the afternoon after 23 minutes, this time Baggaley diving over on the right edge on her return to the squad.

Burrows got her second of the game in the 27th-minute after a great team move. Harrison on the half break placed a lovely one-handed offload to Burrows, who had support from Grace Holding but threw a dummy to fool her defender and go in under the uprights. Foley added the two points to put Wigan out to 24-6 at the half-time hooter.

The Cherry and Whites came out for the restart with no signs of backing down. Molyneux, captaining the side in the absence of Gemma Walsh and Rachel Thompson, went over for an effort in the 42nd-minute. Wigan worked it well from left to right for Emma Dwyer to send the number 13 crashing over and putting the visitors 28-6 up.

Slick hands from @WiganWarriorsRL as Vicky Molyneux scores her third of the season!

Moments later, the Warriors were over the line again, this time Porter going over on her first appearance for the team. Wigan spread the ball out and Burrows kept hold of it well after a soft pass, before sending Porter over.

Ratcliffe’s side went over again in the 62nd-minute, as Foley threw a dummy before sending Harrison over from short range. Harrison added the extras to her own effort and Wigan were out to 38-6.

A 65-metre dash from the winger as @WiganWarriorsRL turn on the style late on 👏 pic.twitter.com/n3XAGaDp1J

On the result, Wigan Head Coach Kris Ratcliffe said: “Overall I’m quite happy. I think early doors we still had some nerves and tension that we had against St Helens, which is understandable but after about ten minutes we settled into it after we conceded a try.

“In spells we played some really good stuff, and in spells defended really well. I asked them to come out with more energy and work harder for each other, but maybe a little bit more off the ball, and they did that consistently. There’s still elements to work on, but I’m pleased that we got a decent result in the end.”

The boss praised the performance of Charlotte Foley on her return to the squad: “I think Charlotte Foley just added that composure for us; she’s really smart at leading a team around and picking opportunities. There’s still times where we stood a little bit too flat, and didn’t give ourselves time to run onto the ball, but when we took that little bit more depth we looked pretty clean.”

On his squad selection, he said: “We were literally down to 17 players. We’ve had a young girl from the Under-19s warm-up with us as the 18th player, but if we’d have taken any more injuries we’d have been playing short this week. It’s definitely a worry going forward but we’ve got a couple of weeks now until we play Bradford, so hopefully we can get some bodies back.

“We might have lost Christina Tully this week; fingers crossed that’s not too bad and we can get some people back for Bradford, but even so the players who came in did a really good job. Emily Baggaley had a fantastic game after not having game time for a few weeks and Rachel Porter made her debut and scored, so those elements are nice and a positive in the situation.”

Up next for Wigan Warriors Women is Bradford Bulls on the road in the next round of the Women’s Super League on Sunday 21st July.