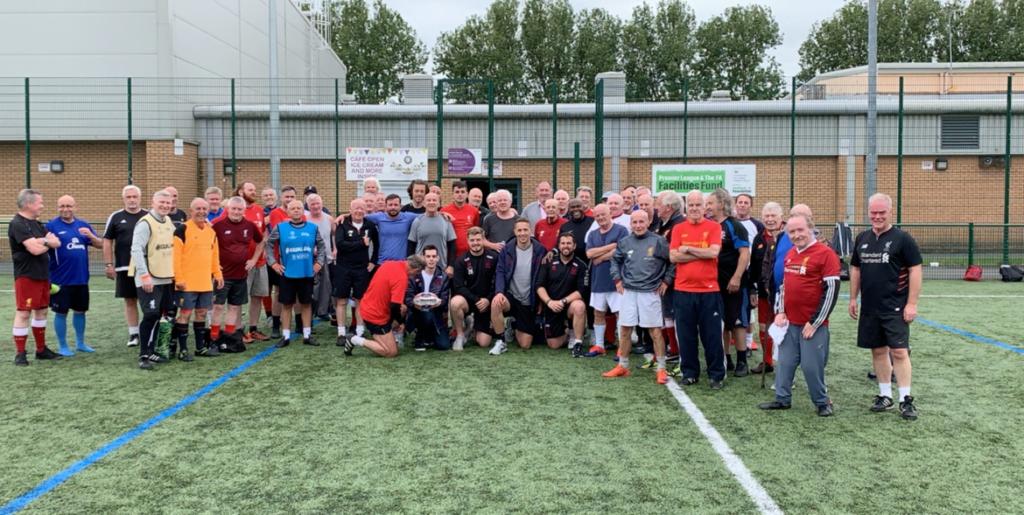 With just one day to go until the Magic Weekend at Anfield, Wigan Warriors headed to Liverpool to visit the Red Neighbours.

The Red Neighbours is Liverpool’s local community programme that is based in the Anfield area and offers walking football sessions.

“The best thing for me is the mental side that people always seem to forget in sport,” Marsh said. “There are guys there who don’t get out much and don’t play much rugby, so it is a really good event for bringing them together.”

Warriors players Liam Paisley and Liam Forsyth joined in the session as well as having a game of football with the group.

“It was good to be apart of it,” stated Paisley. “It was something different as we were playing with a different shaped ball.”

Liverpool Club Chaplin and Red Neighbours team member, Bill Bygroves, says the opportunity for people in the community to go down and play football a few times a week is a ‘wonderful’ thing due to the growth of isolation amongst men in the area.

He said: “We’ve become a real band of brothers. We don’t just play football; we are able to help one another - a problem shared is a problem halved.

“It is vitally important we have that commitment to reach both men and women. We visit the nursing homes around here and reach out to older people.

“The rugby warm-up was great and it was good to have the ball in our hands; it was a bit of fun and I think the lads enjoyed it and will be going down to watch some of the games at the Magic Weekend.”

The two-time Champions League winner believes it is important to get people out of their comfort zone and that the people who take part are ‘absolutely terrific’.

“They’ve grown and grown in confidence. They want to come down and play a sport they wanted to play years and years ago. When we started eighteen months ago there were 25 of us, but now it has doubled so it is great for community.”

“I have a real competitive streak and my job is to get the best out of my team and win, not at all costs but in order to play in the right spirit.”

He said: “I used to watch it in the early 80s, going to local derbies between Wigan and St Helens at Knowsley Road. Now we have got it at Anfield which is wonderful. I remember seeing England and Australia play there, so it is fantastic we are broadening our horizon.”