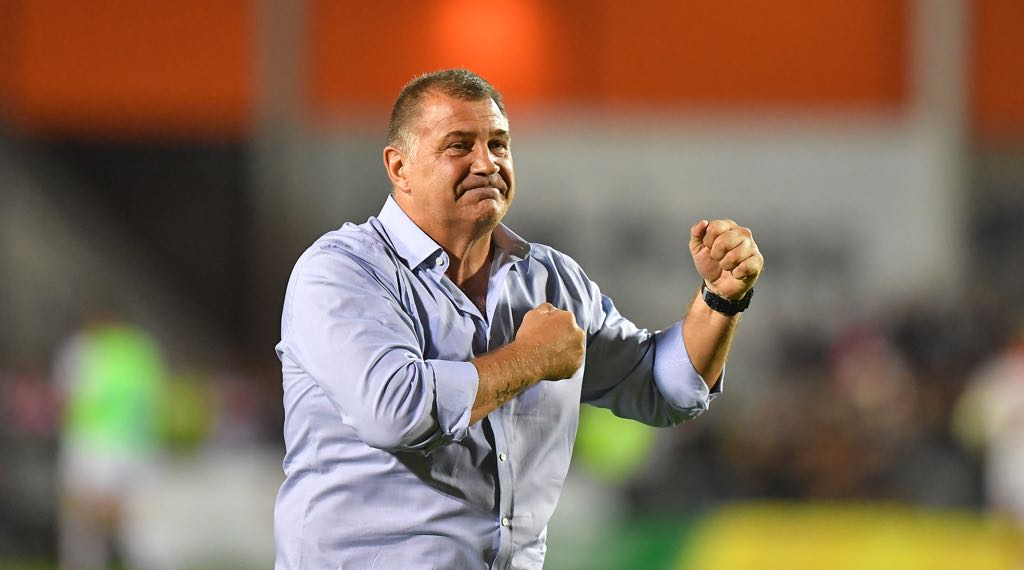 Wane: Best win of the year.

Wigan Head Coach Shaun Wane spoke to the press after the game and shared his thoughts after Wigan’s derby win at St. Helens on Thursday night.

On whether it was the best win of the year:

“Oh yes. It’s the only time we’ve beaten them! Those other two game (against them) were tight but this one was well deserved, it was really, really enjoyable. I thought our ball movement was good. I thought our D (defence) was good when it needed to be and I thought the details in our attack were on and it carried on when Lockers (Sean O’Loughlin) went off. We knew where we needed to get to and we did that, the game plan worked.”

On whether it was the best 80-minute performance in 2018:

“Yes. We were good against Catalans away but that (St. Helens) was a lot more intense and a more important game. They would have won the league leaders and got 3-0 on us so that was a major motivating factor for us. They’ll get it and they deserve it as they’re a very good team, which makes it more enjoyable as well.

“I’m happy. I’m happy with the way we’re playing and we’re going to get Faz (Liam Farrell) back and Dom Manfredi so we’ve got some players coming back. The interaction between the coaches and the players in how we came up with a plan to win; it’s a good feeling in the club, no question.”

On the extra emotion of it being his final game as Wigan Head Coach at St. Helens:

“There was a bit of emotion when I spoke to the players because of a few things some of them said to me when they were coming off. It was emotional. I’ve enjoyed coming here and we’ve had some good hidings and good wins so I think it’s enjoyable as I have a lot of respect for people here as well and they’re always a team that turns up so the myth that I detest is wrong. I respect this club but enjoy beating them as well!”

“I thought the try just before half time what they scored hurt me. That was poor and we didn’t concentrate and that was really frustrating. I felt good though and I didn’t feel there was time when they were going to get us, I felt ok. Even though there were some frailties in what we did in our detail, we just had enough desire to defend. When we look back and review that game, in all honesty it won’t be a fantastic one. There’re a few things we need to fix up.”

“Sam trained all week and in yesterday’s team run he wacked knee’s with Sarge (Dan Sarginson). Because it was St. Helens week, I’ve been having to calm everybody down a bit as everyone got a bit giddy. We lost Sam in the warm up and we showed a lot of character. Morgan (Escare) was on the bench and Ollie (Partington) weren’t in and all of a sudden, he’s playing. I can’t imagine what it feels like for him; a kid from Orrell playing in a game like that against a champion team like Saints.”

Wane confirmed that Tomkins will be good to feature in Thursday’s game with Wakefield.

“(Joe) played well. There’s so much improvement in him it’s frustrating but he’s making improvements every week but I want him to get better and he will get better. (John) was good. I don’t know how he does it. He’s just competes and he’s a born competitor and I thought he was hard to handle. I thought Tommy (Leuluai) and George (Williams) were good and I thought Sam Powell playing 80 minutes and defending like he did, I thought he was immense. I was impressed by quite a few performances and that song we just sung then was one of the best. It was very, very enjoyable!

“George was good. He’s been good since he’s come back from injury. He’s had a couple of knocks these last few months but I thought he was very, very good. His stuff off the ball, we went down his side when we needed to and that’s what we’re trying to educate him with so it meant a lot to him, no question. There’re some emotional players in there which is great and we didn’t want to be stood watching them while they got the league leaders even though they deserve it. We just didn’t want it that game.”