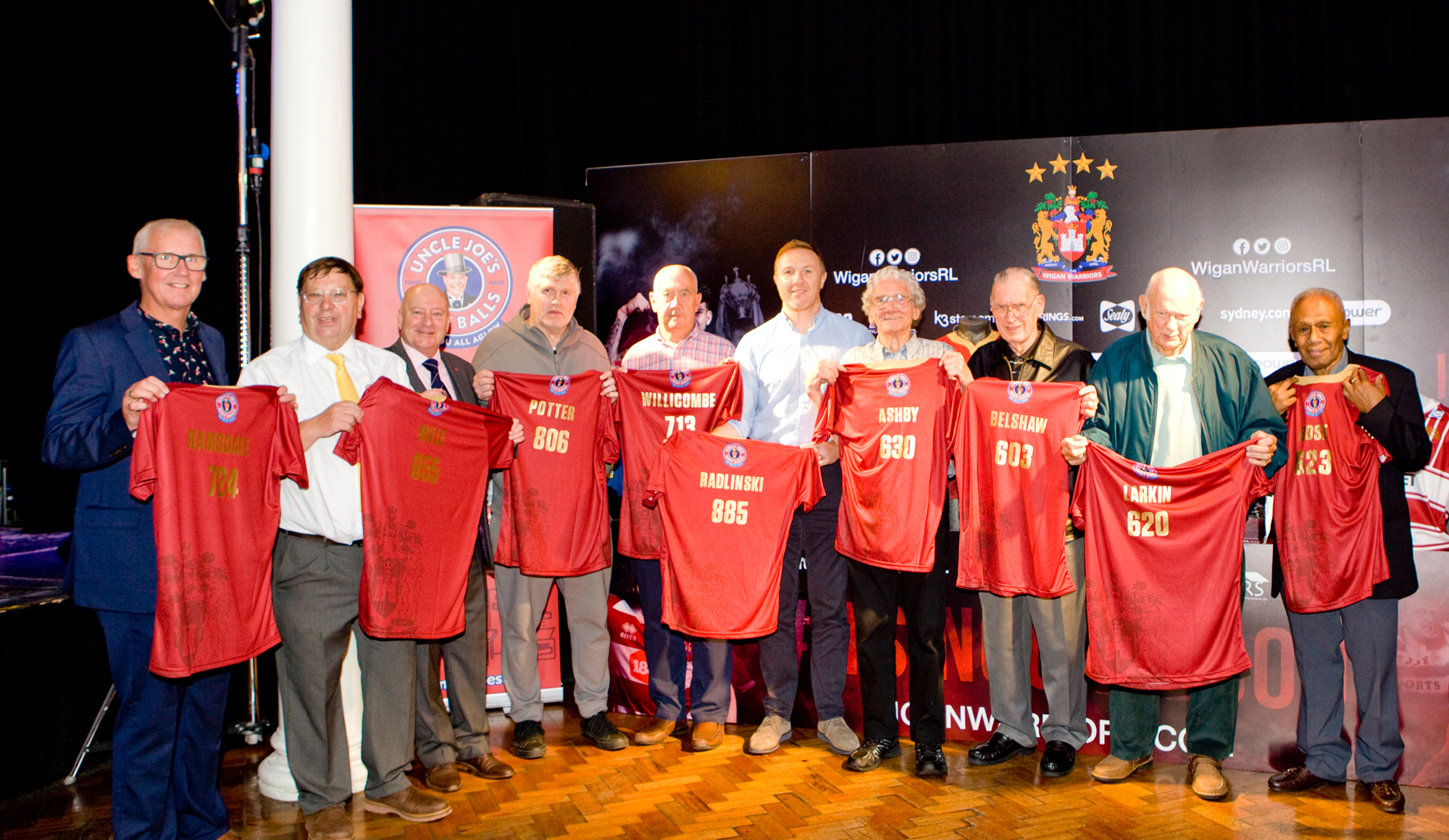 On the day Rugby League celebrates its 123rd birthday Wigan Warriors have teamed up with long-time partners Uncle Joe’s to release a limited edition heritage shirt to celebrate the Club’s past players.

The shirt, which is available to all ex-players who have represented Wigan’s first team free of charge, was launched at a past-players event where former players such as Andy Gregory (#833), Ian Potter (#806) and Ray Ashby (#630) were presented with a personalised version that includes their unique individual heritage number. The shirt will also be used as a training top for Wigan’s first team and fans are also able to purchase their own from Warriors World from £30 for juniors and £40 for adults.

The heritage numbers project, which was launched in 2013, recognises every player who has worn the Cherry & White of Wigan since the birth of ‘Rugby League’ at the George Hotel in Huddersfield on the 29th August 1895.

Warriors Executive Director, Kris Radlinski (#885): “We’re always looking at ways to re-engage with our past players and build on our heritage numbers project that we launched in 2013 so we’re delighted to launch this shirt.

“Uncle Joe’s is a proud Wigan company, who have always wanted to work with us by releasing a shirt so we’re very pleased be able to do so for such a special project. All of our former players can pick their own personalised shirt from Warriors World, free of charge, and we’re looking forward to seeing how many do so over the next few months.”

Former Wigan and Great Britain scrum-half, and Warriors hall of fame inductee Andy Gregory was presented with his own shirt at the Warriors past-players event earlier this month, said: “I’m extremely proud to have been presented with my own heritage shirt and I think it’s a fantastic idea to have them available for ex-players, and also for the fans. It’s great to have Uncle Joe’s on board in this project, as they’re long time supporters of the Club and I’m sure there will be plenty of other ex-players who’ll want to grab their own too.”

Traditional sweet company Uncle Joe’s was established in Wigan in 1898 by William Santus, and has remained in the town and is now under the ownership of Santus’ great nephews John and Antony Winnard. Speaking about the shirt’s launch, owner Jon Winnard said: “I think we are (Uncle Joe’s) part of town, much like Wigan Warriors are, and our story of growth mirrored the town’s love affair with the sport of rugby league. Our great uncle William used to go to Central Park and give out the sweets on the terraces and we’ve always wanted to support the Club so we’re delighted to part of the project that celebrates the rich history of the Wigan Rugby League.”

The Warriors heritage shirt is available for all former players who have represented the first team at the Warriors World for free. Fans can purchase the shirt online and in-store with personalisation of their favourite Wigan Warriors players, past and present, available.