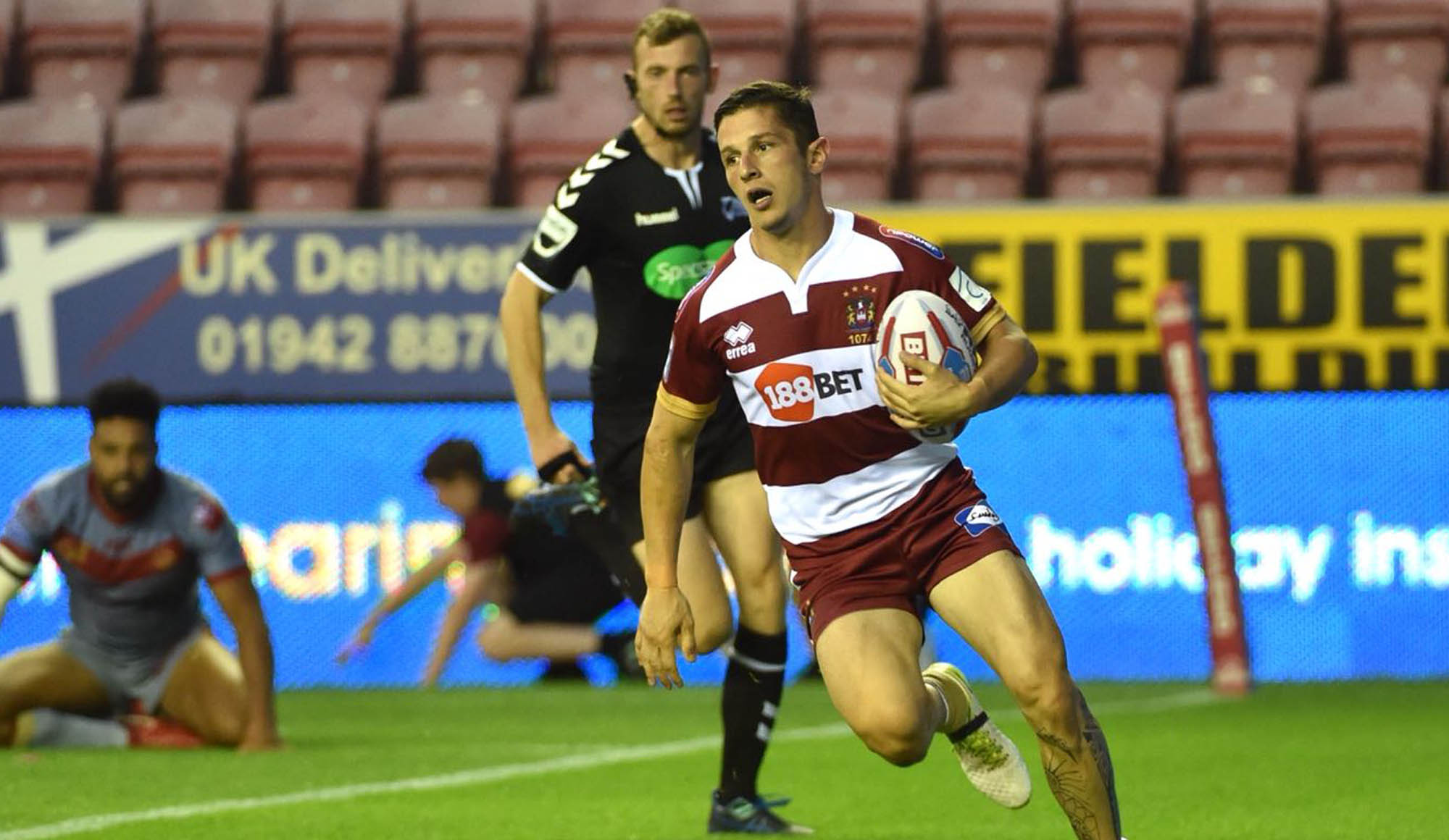 Late Show wins it for Wigan

It was a close encounter at the DW Stadium as Wigan beat Catalans 25-20 to finish their last regular season game with a win. Broughton opened the scoring, but Chris Hankinson got his first Wigan try to make it 6-6 after 15 minutes. A Sam Tomkins penalty goal enough to put Wigan 8-6 to the good at half time. Wigan flew into the second half, Escare going over against his former team before Sam Tomkins helped himself to one. Catalans launched the comeback as Da Costa and Yaha got over for the visitors before a penalty goal drew the scores to 20-20. Sam Tomkins handed Wigan a lifeline as he slotted over a drop goal 8 minutes from time, but Joe Greenwood sealed the victory in the 78th minute.

Chris Hankinson retained his place in the Wigan line up after impressing in his debut against St Helens, Morgan Escare and Romain Navarrete both made the cut to face their former side. Wigan still without O’Loughlin, Williams, and Sutton through injury.

Michael McIlorum returned to the DW for the first time since joining the Dragons, but Catalans were without Remi Casty, Ben Garcia and Josh Drinkwater amongst others as they prepare for their Challenge Cup Semi Final.

It was a slow start to the game, with neither side showing much spark but Catalans soon started to have the better of the chances, forcing a goal line drop out in the 5th minute. It was the visitors who crossed first, Jodie Broughton getting on the end of a misjudged grubber kick to score at the corner in the 7th minute, the effort converted by Albert for 6-0 Catalans. The Warriors struck back in the 15th minute, new boy Chris Hankinson bagging his first try for Wigan, getting in the air to collect a well-placed kick to the corner from Sam Tomkins, Tomkins also adding the extras to make things level at 6-6. Catalans searched for a way over in the 23rd minute, a low grubber going towards the uprights but Josh Woods was there to dive on the ball first and stop the Dragons attack.

Wigan lost Leuluai and Hankinson in the 25th as a collision in a tackle meant the pair had to leave the field for concussion assessments, Flower and Escare coming on to fill the gap. Wigan led for the first time in the game as a penalty goal was slotted over by Sam Tomkins in the 30th minute, after John Bateman was held too long in the tackle, Wigan with the 8-6 lead. Kenny Edwards was dismissed in the 39th minute, after a late high tackle on John Bateman and a scuffle between the two sides the referee deemed a red card was sufficient, the goal attempt was missed and Wigan went into the sheds with the narrow lead.

The Warriors flew out of the blocks in the second half, Morgan Escare going in under the sticks right from the restart against his former side as Liam Marshall raced away down the left wing to assist the Frenchman. Sam Tomkins added the extras from close range to make it 14-6 in Wigan’s favour. Sam Tomkins extended Wigan’s lead in the 46th minute, the Warriors with good hands to keep the ball alive and the number one dived over to get the score, converting his own try for Wigan 20-6.

Da Costa dived over for Catalans in the 52nd minute, the number 24 spotting a gap and going for it, the effort converted by Albert to make it Wigan 20-12 Catalans. The Dragons were back in the game as Yaha got the ball down in the 59th minute, Iain Thornley with the initial break to take Catalans upfield and a kick through wasn’t dealt with, Albert with a third conversion made it Wigan 20-18 Catalans. It was all square again in the 67th minute, a late hit on Catalans penalised and Lucas Albert was able to get his side back level from the tee, Wigan 20-20 Catalans. Sam Tomkins handed Wigan a lifeline in the 72nd minute, getting his drop goal attempt inch perfect to give the Warriors a one-point lead with the clock ticking down.

The game was sealed in the 78th minute as Greenwood slid onto the end of a ball through and got the score. The conversion from Tomkins went wide but the Warriors had done enough to snatch the victory at the death.