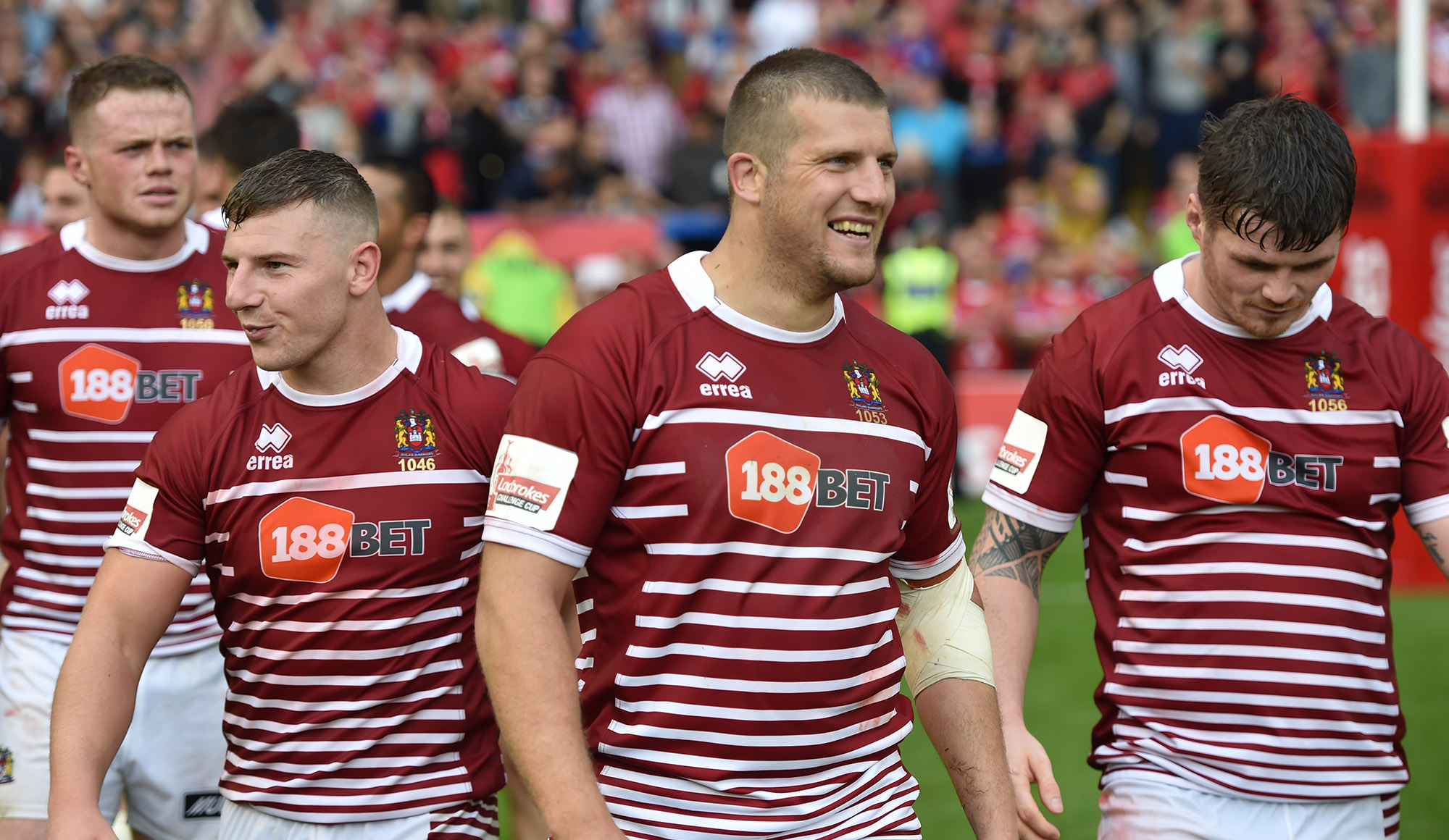 Wigan are on their way to Wembley after a pulsating semi final victory over Salford Red Devils.

The Warriors led 12-0 early on after tries from Oliver Gildart and Willie Isa but the Red Devils came roaring back with two of their own through Greg Johnson and Junior Sau to level at 12-12.

Ian Watson’s side were in front at the break after a penalty goal for an infringement by Sam Tomkins, the Wigan full-back subsequently sitting out the final ten minutes of the half for blocking a Salford player.

Wigan came out fighting in the second period and levelled the game in the 55th minute when George Williams added a penalty goal having had the ball stolen from his grasp illegally.

Michael Mcilorum came on for a second spell at hooker for Wigan and two minutes in scored a fine try and stooping low to collect Joe Burgess’ kick.

Sam Tomkins added a drop-goal as the clock ticked down. There was still time for late drama as Anthony Gelling received a yellow card for interfering with a Salford tap but Oliver Gildart’s last minute try saw Wigan home 27-14 and into the Ladbrokes Challenge Cup Final.

Joel Tomkins returned for the Warriors taking Jack Wells’ place on the bench. Liam Farrell failed a late fitness test so was unable to return.

Gareth O’Brien was named on the Salford bench, a late call-up for Ian Watson’s side having not been named in the original 19-man squad.

Wigan started like a house on fire and led inside eight minutes when George Williams put Willie Isa in clear space to feed Oliver Gildart for the game’s first try.

Williams converted and soon extended the lead in the 12th minute after John Bateman was held down following a Sam Tomkins break, 8-0 Wigan led.

Micky Mcilorum was controlling things for Wigan in the middle of the park and he was involved in Wigan’s second try when a quick distribution from him allowed Williams space to put Willie Isa over for his first of the season.

There had been a lot of talk about Manu Vatuvei in the build up, the New Zealand international debuted on the left wing, but it was Salford’s other winger Greg Johnson scored his side’s first. Following back-to-back sets the Red Devils went right and Johnson squeezed over in the corner. Michael Dobson converted and it was 12-6, 25 minutes in.

Just two minutes later and Salford were in again after try-scorer Johnson made a break from the restart. The Red Devils moved up field and a kick through the defensive line found Junior Sau who just got a touch on it to score.

Michael Dobson was looking handy with the boot and his right foot put Salford in the lead for the first time. Another kick into the in-goal forced Sam Tomkins into action but the referee judged that Tomkins obstructed a Salford player off the ball and he was sent to the sin bin.

Wigan had ten minutes to see out the half but in fact they probably had the better of it forcing a drop-out near the end but it remained 12-14 at the break.

Tomkins returned in the first minute of the half and moments later he made a break and put Burgess over the whitewash. It went upstairs though and the video referee ruled that there was a knock-on from Burgess whilst going over the line.

Wigan were beginning to turn the screw and Salford opted for a 40-20 through Todd Carney but his attempt failed and Wigan were in the ascendency. They motored forward only for an illegal ball-steal to stop George Williams. The Wigan stand-off levelled the scores up from a penalty goal.

Just a minute later a high shot on Taulima Tautai saw the prop forward leave the action. The Warriors looked to take the lead but Williams’ 30-metre goal attempt drifted to the right.

Micky Mcilorum returned on the hour-mark and made the biggest of impacts when he stooped low to collect a Joe Burgess kick to slide over. Williams added the two and Wigan were back in front at 20-14.

Shaun Wane’s side had dominated the second half so far and they made it a two-try lead when Sam Tomkins added a drop-goal from in front of the posts.

Shaun Wane’s side looked comfortable and had one foot on the coach to Wembley but a sin-binning for Anthony Gelling after the Wigan centre got in the way of a quick-tap meant for a nervy final nine minutes.

The one-man advantage breathed life into Salford but Wigan held their nerve and the final say on the final hooter as Oliver Gildart went through a gap to score his second, Wigan’s fourth and final try.

To sync Wigan’s fixtures with your calendar CLICK HERE.