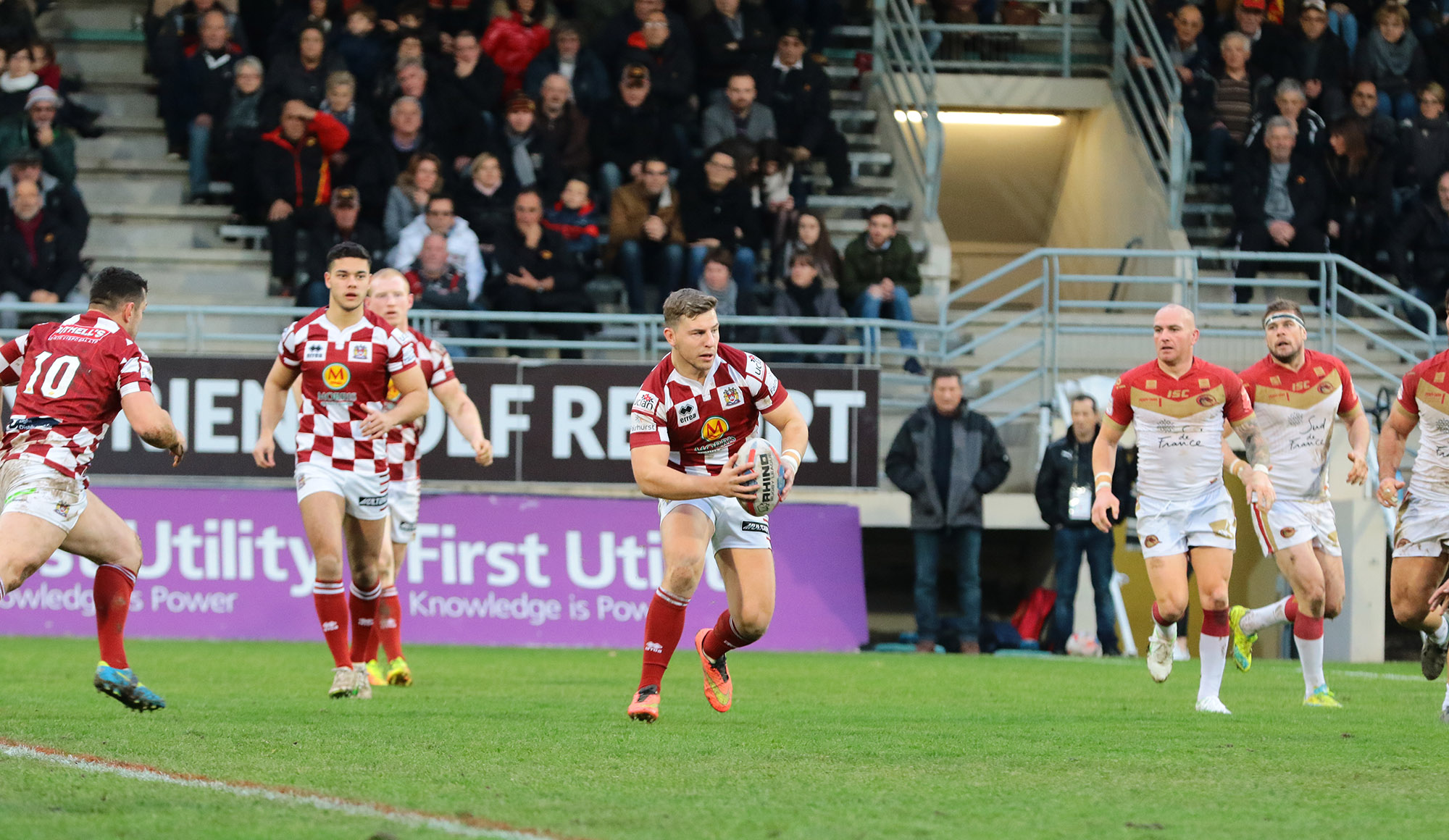 Joe Burgess made his eagerly awaited Wigan return and scored a brace as Wigan saw off Catalans 26-22 in their final pre-season game in Perpignan.

All five of Wigan’s tries came from wingers with Lewis Tierney, Liam Marshall and Tom Davies all getting in on the act as Wigan held-off a Catalans fightback.

Catalans took an early lead through Sam Moa but the Warriors replied with a try from Burgess before Tierney put them 10-6 to the good on the half-hour mark. Wigan then scored two in as many minutes with Burgess grabbing a second before Marshall’s try made it 20-6 at the break.

The hosts hit back with two tries in the first 15 minutes of the second-half through Krisnan Inu and Fouad Yaha before Davies put Wigan eight points ahead. Inu went over for his second seven minutes from time but Shaun Wane’s side grinded the game out with a 26-22 scoreline.

Joel Tomkins made his first appearance in seven months after knee surgery along with Joe Burgess who started on the wing on his Wigan return after a year in the NRL.

Catalans started the better side and scored early doors through Sam Moa who burst onto a flat ball from youngster Alrix Da Costa to barge over from close range. Walsh converted to put his side 6-0 in front.

Wigan came close to levelling things up 10 minutes in as George Williams put a nice kick into the corner but desperate Dragons defence denied the try.

Burgess scored his first try of the game 14 minutes in after skipper Sean O’Loughlin showed great skill to offload to the England winger. Escaré failed to convert from the touchline, Catalans 6-4 Wigan.

Warriors hooker Sam Powell put out a real statement of intent to the Catalans pack in the early stages, putting a few big hits on the forwards.

Tierney put the Cherry and Whites into the lead for the first time when he finished excellently in the corner following good build up play from Tommy Leuluai and Anthony Gelling. Escaré added the conversion from out wide to put the Warriors into a 10-6 advantage.

Wigan were firing well and soon crossed for two tries in as many minutes with Joe Burgess sprinting 30 metres down the left channel to finish a nice set play from a scrum before Morgan Escaré’s chip over the top was touched down by Liam Marshall.

Young centre Liam Forsyth took a knock early on but returned to the action as the game neared half-time and he helped Wigan into a good position when his interception stopped a certain Catalans try. The Warriors were unable to convert however they still deservedly led 20-6 at the interval.

Laurent Frayssinous’ outfit started the better again and scored six minutes into the half when Luke Walsh passed wide to Krisnan Inu who cruised over from a few yards out.

The Dragons struck once more in the 56th minute as Fouad Yaha dived in at the corner after they went down the blind side. Walsh added the extras and Wigan’s lead was now down to two points at 20-18.

2016 Under 19s Player of the Year Tom Davies put Wigan back into a two-try lead when Sam Powell, on in the halves, put a neat kick in that sat up perfectly in the in-goal area. Escaré converted and Wigan were 26-18 to the good with 15 to play.

Inu had caused Wigan problems for much of the game and the Catalans centre grabbed a second try as he fended off a couple of Wigan defenders on his way to the line.

Wigan had six minutes to hold on and they did exactly that as stern defence kept the Dragons at bay enabling the Warriors to pick up a morale boosting win ahead of their Super League opener at Salford two weeks today.