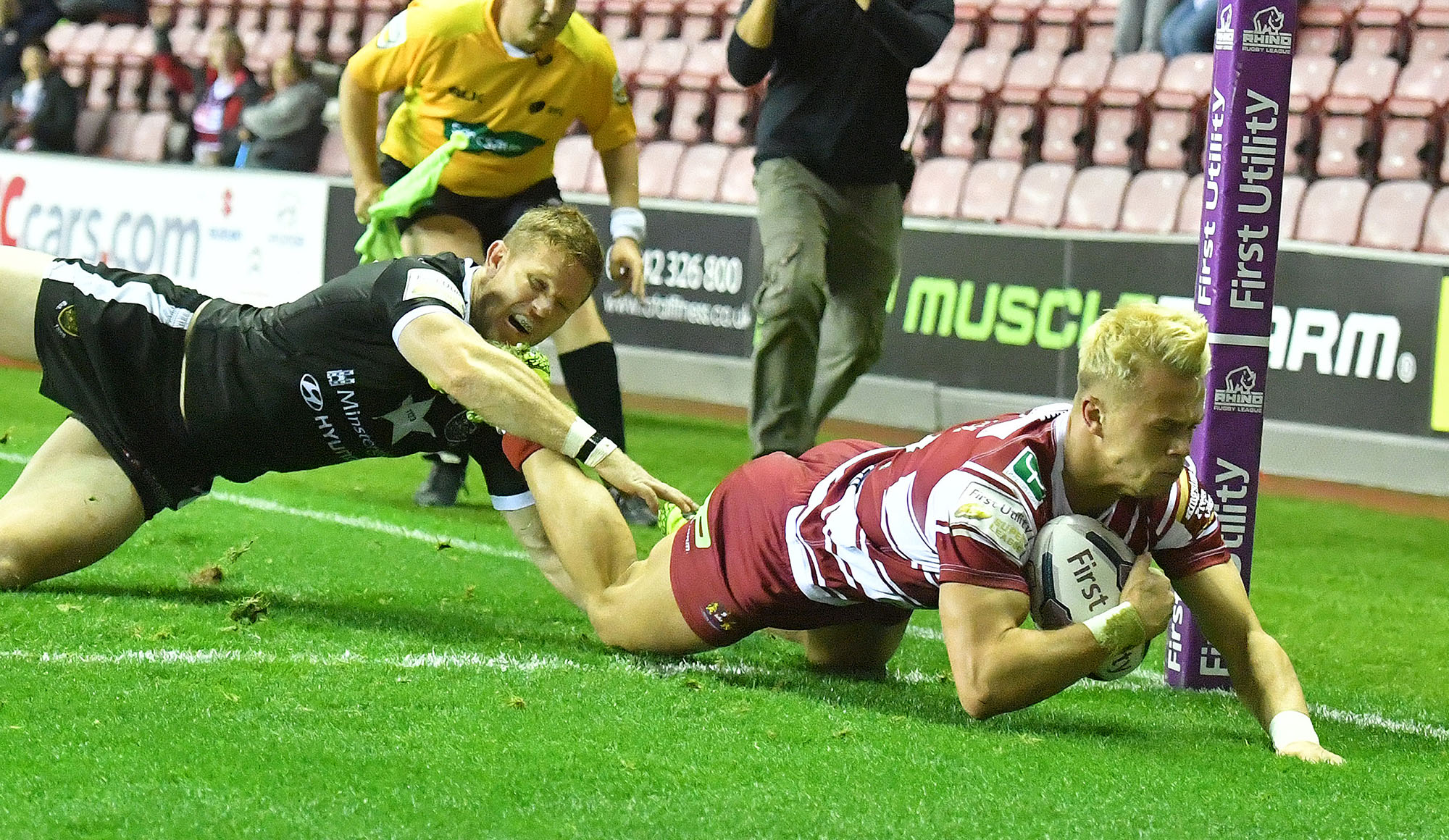 Wigan led 14-0 at the break after Lewis Tierney scored twice early on before John Bateman crossed on the half-time hooter.

Hull hit back with three tries to burst into the lead midway through the second half.

Wigan were rocking but found a second wind as Sam Powell put them in front with seven minutes to go before Anthony Gelling crossed at the death to secure the win!

Wigan named the same 17 that played in the Big One 6 win over Catalans, the only slight change being Willie Isa started with Ryan Sutton on the bench.

Hull were without Gareth Ellis and Sika Manu for this semi-final showdown.

Wigan had the better of the opening exchanges and they took the lead in the 8th minute when following a drop-out a nice move down the left gave Lewis Tierney a half-chance and the Wigan winger scored in the corner.

The game was brutal and Dan Sarginson took one up high with claret pouring from the nose midway through the half. The game was stopped soon after again as Sarginson received further treatment.

Hull were stifled by strong Wigan defence and had a let-off in the 31st minute as George Williams’ pass to Liam Farrell was called forward. From their next set Wigan created another chance as Anthony Gelling’s kick through just evaded the outstretched arm of Josh Charnley.

The Black and Whites needed a try before half-time but Wigan struck the next blow on the hooter. Matty Smith’s drop-goal attempt was blocked by Danny Houghton but the rebound found John Bateman who made a half-break and went low to slide in under two defenders. Matty Smith’s conversion made it 14-0 at the interval.

With Lee Radford’s words ringing in their ears, the Black and Whites upped the ante at the start of the second half and they were rewarded in the 46th minute when Josh Bowden barged his way. After a brief review from the video referee the try was given and Marc Sneyd’s boot made it 14-6.

Hull had all of the momentum and went up the middle again through Liam Watts who scored next to the uprights to bring his side within touching distance at 14-12.

Wigan needed to stop the flow and they did that with a good defensive set which gave them good field position. On the last, Smith kicked through and was taken out by Mark Minichello. Wigan opted for the penalty and Smith made it 16-12 with 25 minutes remaining.

A huge moment went in favour of the Black and Whites in the 63rd minute, a grubber kick into the Wigan in-goal seemed to have evaded everyone and Oliver Gildart picked up to run 100 metres to score. The try was pulled back by the video referee as Michaels got the faintest of touches to the ball inside the Wigan in-goal and was awarded the try. Sneyd added the two and Hull led for the first time at 18-16.

Wigan looked for a way back in the game and Sam Powell had the answer as he latched onto a Willie Isa offload to throw himself over the line. Smith converted and Wigan held a slender four point lead with seven minutes remaining.

The Black and Whites came back again and forced a drop-out but Wigan duly defended it and went down the other end to score through Anthony Gelling to send the DW Stadium into raptures!