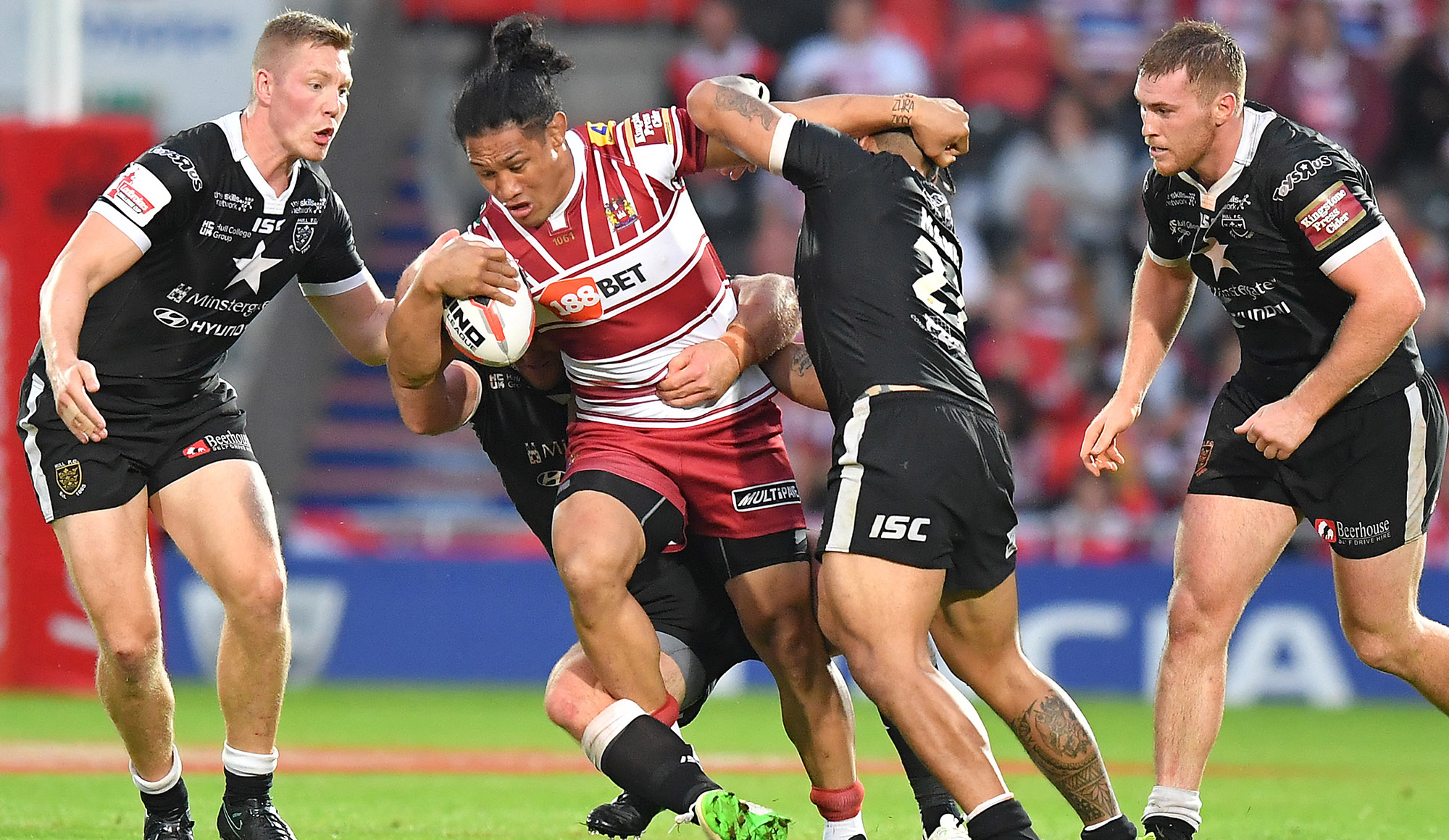 Wigan went down to defeat in the Ladbrokes Challenge Cup semi-final losing 12-16 to Hull FC.

Both teams scored two tries a piece but ultimately two Marc Sneyd penalty goals proved the difference between in a ferocious and dramatic game.

Taulima Tautai returned from suspension for Wigan whilst Joe Bretherton earned a recall with the duo replacing Frank-Paul Nuuausala (suspended) and Jake Shorrocks on the bench.

Hull had the better of the early exchanges and were camped on the Wigan line in just the fourth minute after a 50-metre break from Fetuli Talanoa. The Warriors held firm and kept FC scoreless.

Sam Tomkins soon forced a drop-out just a minute later when his fine kick was forced dead but Wigan were unable to capitalise.

The game was being played at a ferocious pace and Hull FC forced a drop-out of their own in the 14th minute but were unable to score as a forward pass was called early in the set.

It would need some magic to open the scoring and George Williams provided it. The Warriors half-back took on the Hull line from close range and barged his way over to give Wigan the lead, 6-0.

Hull continued to have the better of the possession but couldn’t unlock the door. Their frustration summed up in the 26th when near to the line they opted for the penalty goal and Sneyd chalked up their first points of the night.

The goal helped enthuse Hull who went close through Gareth Ellis five minutes later but his effort was ruled short by the video referee.

Wigan had the final chance of the half and looked to have added to their lead only for Lewis Tierney’s try to be ruled out for an alleged forward pass in the build up.

Wigan added to their lead just three minutes into the second half after Matty Smith kicked a penalty goal after Liam Watts failed to clear the play the ball.

Lee Radford’s side struck back just four minutes later when numbers on the right led to Steve Michaels going in at the corner. Sneyd’s boot levelled the game at 8-all.

Hull continued to attack and had a video referee decision turned down after Shaul knocked-on. Hull had the ball back just seconds later though and Fetulia Talanoa jumped on a loose ball in the Wigan in-goal area to score and make it 14-8.

Mahe Fonua left the action in the 57th minute after being knocked out after getting his head in the wrong position trying to complete a tackle.

Sneyd soon put his side further in front five minutes later after an infringement at the play the ball, his penalty goal making it 16-8.

Wigan needed to score soon to stand a chance and they started to pummel the Hull defence with a series of attacks. The defence finally gave way in the 71st minute when George Williams put Willie Isa through a gap to score. The conversion just wide.

Just 12-16 down now Wigan continued to ask questions but Hull had the next big chance as Mark Minichello went 50 metres and looked to have sealed the game only for the video referee to spot a knock-on as he collected the ball.

In a dramatic final four minutes Wigan went close through Dom Manfredi and forced two drop-outs but Hull held on.