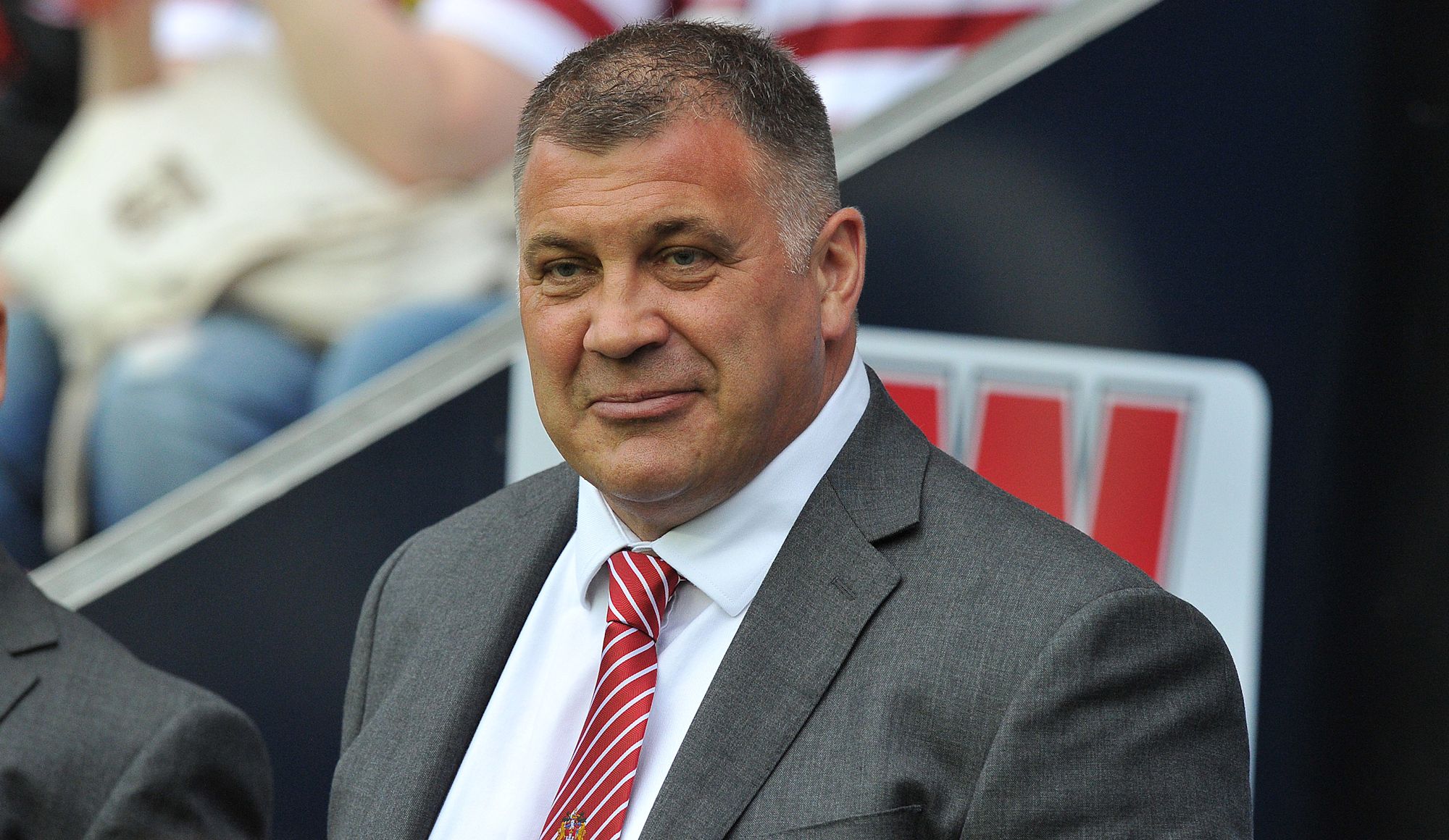 Farrell and Mossop on Wane

Ahead of Shaun Wane’s 150th game as Wigan Coach the Warriors caught up with Lee Mossop and Liam Farrell who have both played with the Warriors Coach at Under 18s, Reserves and First Team.

Liam, Lee, what is your first memory of Waney?

LM: Well I’d signed for Wigan but hadn’t actually moved down from Cumbria at the time. The Club hadn’t sorted my accommodation so I came down and stayed with him one night before a game. I remember him asking me, “do you like pets?” To which I replied, “I’m ok with most”. He then said “do you like cats?” And I said “I can’t stand them”. To which he told me that he had three! It wasn’t the best start. He looked after me though and I appreciate that. He’s had a massive influence on my career so I owe a lot to him.

LF: I suppose just remember him being a bit intimidating really, not in a bad way, he just had that effect on people where he knew how to get the best out of them but at the same time he put you under pressure and made sure you played well. Still to this day he scares me a little bit a times.

What was he like as a coach back then?

LM: Exactly the same as he is now, he’s strict, he knows what he wants from his players. He gets the best out of his players and looks after them as well. People love playing for him so I wouldn’t say he’s changed much at all.

LF: Yeah he’s really not changed at all, he still coaches in the exact same way as he did back then. His thoughts on the game are exactly the same. It’s one thing I’ve probably noticed that he’s still the same kind of bloke and coach and it’s done him well with all of the success he’s had. He also doesn’t just want you to be a better player but a better person as well. He doesn’t just want good players he wants good blokes too that buy into the culture of the club.

Would you say he’s helped drive a good culture at the Club?

LF: Definitely! I was full time in 2009 but it wasn’t a great atmosphere to be honest. In 2010 everything changed. Michael Maguire came in with Waney as Assistant Coach. Madge was big on driving the culture of the club and getting it back to how it was, I don’t think that would have happened like it did if Waney wasn’t there. He wanted to get as many young lads in as he could and luckily I was one of those that he threw in during 2010. Waney had coached me since I was 15 and I went into the pre-season with a broken foot and a broken hand so I wasn’t in great shape but he kept pushing for me to play and I got my chance and thankfully here I am six years later. I’m still really grateful to him because he’s one of the people who got me that chance. He’s definitely the reason the club is like it is now with so many young players, it’s a big thing for him, he wants as many Wiganers as he can in there and at the moment he’s got quite a few in.

LM: Like Faz said, Waney has been a big part of that change in 2010. With Madge being an Aussie he didn’t really know the culture of the place but Waney drove a lot of that and since he took over he’s just driven that more and more. He looks at it as a real privilege to play for Wigan and it is, he drives that home to the players. When the young kids come in they have to do the graft in pre-season first and around training they have their own chores that they have to do, they have to make sure the field is ready for training and tidy up at the end of the day, that sort of stuff. You have to earn your stripes under Waney which is how it should be at a club like Wigan.

He’s won something at every level, why is that?

LF: I think it’s his desire to win, he’ll not settle for average and always wants the best out of his players. I think that’s one thing he’s really good at. He gets the best out of the players and I think that’s one thing he’s always been able to do. As I said before, he’s intimidating but he makes you want to play your best so he doesn’t have to give you a telling off in his office. At Under 18s I won a couple of Grand Finals with him, at Reserves we won it back to back for about three years then the Grand Final with him as Assistant in 2010 and then again in 2013.

LM: Yeah Faz touched on it there, I think he just gets the best out of whoever is playing for him, one thing he’s said to me since my first day here and still says now is that he hates players underselling themselves and not reaching their potential. Players really want to play for him, you want to win for him as well as yourself. I think as long as you’ve got that respect from the players then you’ll always do well.

What sets him apart from other coaches that you’ve had in your career?

LM: I’d say it’s his honesty. Personally I always like being told it as it is, if I’ve not the best of games then I don’t want to tip toe around it and he’ll tell you it as it is. We’ve sort of built that relationship up over the years whereby now he knows that he doesn’t have to tell me, we both know when I’ve not been at my best. If I have an off-game two weeks in a row then he’ll pull me in and say “you need to sort it out” so I think that sets him apart really.

LF: Yeah I’d agree with that. I also think his passion and desire to win are important too. He was Assistant for a few years and when he took over I think he stepped up to another level. His determination to win as a Head Coach is second to none, he works really hard and wants us as players to match how hard he works. I think the club has a great culture now of working to the best of your ability, I think we’ve got that down to a tee and he’s the driving force of it.

You both mention being called into his office, what’s that like?

LF: He’ll say that he wants a chat but you can never work out if it’s a good chat or a bad chat until you actually get into the office. He’s an honest person and he likes you to be honest with him so he’ll say when things need to be sorted out and you need to get better at things but at the same time he’ll tell you when you’re doing things that he likes. I think we’d all rather have that than a bloke who is telling you a load of rubbish.

LM: I’d say it’s a bit like being at primary school when the Headmaster calls you into the office. Like Faz says though, that’s what you want as a player, to be told it as it is.

Lee, was he one of the reasons you came back to Wigan?

LM: Yes he was. There were a few other clubs interested and I considered joining them. Obviously I was coming off the back of two back to back seven-month injuries. I missed out with England because of those injuries and wanted to get back into that squad, I still do want to get back into that setup as fast as I can, and I thought that my best chance of doing that is under Shaun. I knew that in the past he’d got the best out of me and wanted to do the same again.

What’s the best teamtalk he’s ever given?

LM: I’d say it was after the 2013 Grand Final when we won the double. He just said how proud we should be and that it was something special that we’d just achieved. Obviously the adversity we’d gone through on that day, we’d come from 16-0 down and everyone wrote us off and he just wanted it to sink in what we’d achieved and that’s one that has stuck with me.

LF: It went in the papers and I’ve actually got that framed at home. He spoke about how hard we work as a Club, on and off the field, and how that year we got what we deserved. That’s not to say we don’t work hard every year, all of the Clubs work very hard so when you win it you need to soak it up.

LM: He’s good, the players know when he’s being serious and when he’s got his coaching hat on but he’s also got that side to him where you can have a laugh and a joke. He’s laid back off the field away from rugby and he’s got a good friendship with a lot of the players as well.

LF: Yeah having known him all of this time he’s a good bloke to get along with. He’s good mates with all of the players and that means a lot to everyone. There’s a time to be serious but he can also relax and enjoy a beer with us like the rest of the lads.

LM: I think it’s 2013 again, I just remember winning that game and seeing him after and giving him a hug.

LF: Good ones or bad ones? I think it’s just the satisfaction he gets from winning really. Waney and all of the coaching staff put in so much effort throughout the year so when we can deliver on the field and can win the Challenge Cup or the Grand Final I think that’s the best thing.

150 games as Wigan Coach is no mean feat, you must be delighted for Shaun?

LM: To get the coaching job at Wigan is a huge achievement within itself so to then become the longest serving coach of the Super League era, at a Club that demands success, and the stress that comes with that is great. Everyone expects success so to reach 150 games and still be going strong, with a team that really wants to play for him and really wants to achieve is a huge achievement for him.

LF: Yeah it’s a great achievement, there is a lot of pressure from fans and from people within the Club to achieve and I think he’s done a pretty good job of that over the past four years or so but I know one thing for sure, he’s never happy. He always wants to get better and better and that’s something he’s definitely done and I think this year we could be on for something special if we keep going like we are.