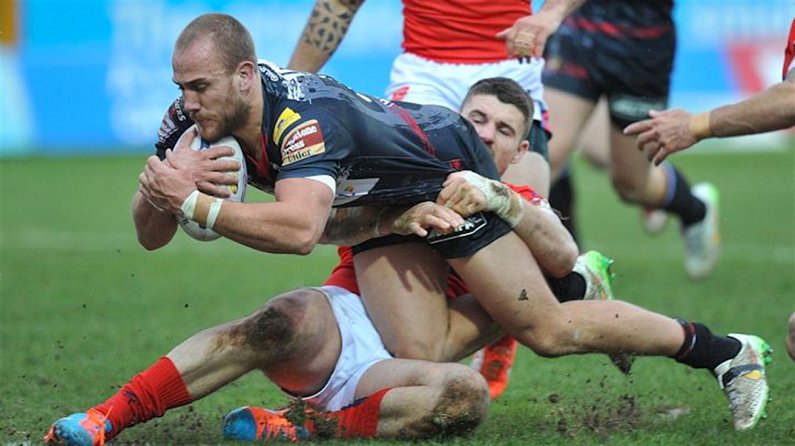 Wigan Forward Lee Mossop has called on his teammates to aim high and target top spot as the Warriors return to Super League action.

Wigan travel to Warrington to face the Wolves at the Halliwell Jones Stadium on Thursday evening knowing they have just four games to secure top spot in the Super League table.

The Warriors currently sit in third, a point behind St Helens in second and two points behind leaders Leeds with the top two set to clash at Headingley Carnegie on Friday evening.

With just four games until the Super 8’s all three teams will be desperate to claim top spot as the team at the top of the ladder will have home advantage against both second and third placed teams in the end of season run-in.

The big Cumbrian forward said: "We’ve had a good chat about that (how important it is to finish top), we don’t just want to be limping into the Super 8’s in second, third or fourth we want that top spot which then gives us home advantage against those top teams.

"We’ve not lost at home in over a year now and that will give us a lot of confidence going in against those teams."

Of the several winners medals Mossop has, he admits the League Leaders ranks right up there: "In 2010 and 2012 when we did it I remember we said that it was the hardest one to win.

"You have to be consistent throughout every single round. It’s a major trophy and we’ve got two major trophies left that we can win, that’s the way we’re looking at it."

Mossop returned to the Warriors from Parramatta in the off-season and believes his best form is yet to come.

"Without a doubt I still want to improve, I think it’s probably took me a bit longer than I had hoped to get over my shoulder injury. I think it’s just subtle things that I’m not quite 100% on yet, this last four or five weeks I’ve felt like I’m starting to get there. I just want to finish the season strong now."

The England International will continue his comeback this Thursday against Warrington.

The Wolves beat Leigh on Saturday to make the semi-finals of the cup however they currently sit in seventh position in the league winning 9 from 19 so far in 2015.

Mossop admits he is expecting a good performance from the boys in primrose and blue.

"They’ve got strike right throughout the team, you can’t put a reason on it half the time (mixed form), we’ve been there ourselves. You train just as hard and we’re doing everything the same but just not clicking on the field. We’re not focusing on that though, we know that if they turn up and play like they can then it’s going to be one of the toughest games of the season."