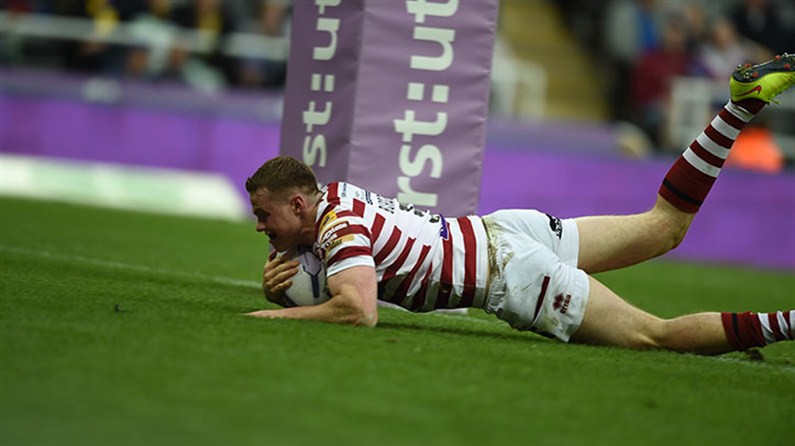 Wigan Warriors kept up their perfect Magic Weekend record against Leeds with a third successive win over the Rhinos.

The Cherry and Whites have yet to lose at Magic under Shaun Wane and this hard-fought win will rank right amongst the others.

Wane’s side looked a totally different outfit to the one that had gone down to Catalans in France last week. Leeds had taken an early 12-4 lead after Dan Sarginson’s early try however Wigan played the better rugby and tries from George Williams and Joe Burgess saw them go in with a 14-12 lead at the interval.

In a tight second-half the teams exchanged set after set and it was Wigan who would grab the crucial try when Matty Bowen capitalised on an Ash Handley error to race 85 metres to score. With 20 minutes remaining Wigan had an eight point lead, a lead that was never really threatened. The Warriors sealed the win in the 75th minute when Matty Bowen touched down George Williams’ kick before Matty Smith had time to convert the try and add a drop-goal.

Shaun Wane made two changes as Ben Flower and Connor Farrell returned to the team after injury with Rhodri Lloyd and Sam Powell the men to miss out.

Likewise his opposite number Brian McDermott brought in Brett Delaney and Jamie Jones-Buchanan, the duo in for Josh Walters and Liam Sutcliffe.

Michael McIlorum was named at hooker making his 200th appearance for the Wigan Club with Leeds’ Jamie Jones-Buchanan set for his 350th career appearance.

The teams entered the field to a crescendo of noise with St James’ Park buzzing after already witnessing two fantastic games of Rugby League.

Wigan started the brighter and drew the penalty on their 40 metre line for a ball steal, Matty Smith barked the orders at his troops and could sense an early try. Just a few tackles later and Dan Sarginson went over from close range, the try went upstairs with Phil Bentham calling it no try in real time as Sarginson appeared to lose the ball. The replay proved otherwise though and Wigan were awarded the first four pointer of the night. Matty Smith missed the near touchline conversion, Wigan 4-0 to the good after seven minutes.

Leeds were racking up the penalties early-on but Wigan were unable to extend their advantage. Shaun Wane’s team had been dominant in collision and squeaky clean in the opening ten minutes, it was back to back penalties though from the Warriors that invited Leeds near the Wigan line and a scoot from Kevin Sinfield near the posts allowed Adam Cuthbertson to smash his way over. Sinfield added the extras and Leeds led 6-4 after 14 minutes.

Wigan looked to respond however an error near the Leeds posts allowed the Rhinos to break. Zak Hardaker made great yards down field and put his team within range. On the last, Danny Maguire lofted the ball to the left with Josh Charnley and Ryan Hall competing for the ball. Charnley managed to reach it but couldn’t collect cleanly and knocked it back only for Joel Moon to be on hand to ground the ball and score Leeds’ second. Sinfield converted again and Leeds had gone from 4-0 down to 12-4 up in the space of three minutes.

Shaun Wane said in the week that his team needed to ‘hang in’ with Leeds for as long as possible and they were certainly doing that. In fact they were having the better of it and were unlucky not to score near the half-hour mark when Joel Tomkins broke down the right, only for the Leeds covering defence to slam the door shut.

Wigan weren’t to be denied in the 33rd minute though when George Williams showed his marker a clean pair of heels on half-way to race in at the corner. The video referee was called upon again with it being a close call as to whether Zak Hardaker had managed to tackle Williams into touch. Conclusive evidence could not be found otherwise and the referee’s decision of a try stood. Matty Smith dragged the conversion narrowly wide but Wigan were within touching distance at 8-12.

The Warriors were in the ascendency and forced an error from Ash Handley close to his own posts in the 35th minute. Wigan couldn’t capitalise on the error on this occasion however they continued to have the upper hand.

The half looked to be drawing to a close with Leeds completing a set in the middle of the field and lofting a ball over the top for Matty Bowen to return. The former North Queensland Cowboy took it to the line before firing a simply brilliant bullet pass to a flying Joe Burgess who ghosted through untouched to stun Leeds and race 60 metres to score under the posts. The Gallogate End, which acted as a makeshift South Stand for the thousands of Wigan fans in attendance, was in raptures and with Matty Smith’s goal Wigan had a deserved 14-12 half-time lead.

The message from the coaches in their half-time teamtalks had clearly been to play completion rugby and the opening ten minutes of the second period saw both teams do exactly that as they went toe to toe with lots of one-up rugby and few chances created.

The Yorkshiremen had the first real opportunity of the half when they made their way up field and broke from about 30 metres out, young Ash Handley couldn’t keep hold of the ball though as he looked to go over for the try.

Leeds continued to ask questions in the Wigan half however another Handley error, under pressure from Joe Burgess, allowed Matty Bowen to collect and run 85 metres and extend Wigan’s lead. Matty Smith goaled from right in front and Wigan led 20-12 with 20 minutes remaining.

The Rhinos needed to start taking a few more risks and started to throw the ball around a bit more. An interesting move down their left saw Joel Moon kick a bouncing ball through for Ryan Hall however Hall’s attempts to collect and flick back to Moon were in vain. Wigan had 15 minutes to keep hold of their lead.

As proceedings entered the final five minutes Wigan sealed a truly brilliant win. Having just forced a drop-out, George Williams threaded a ball into the in-goal, Rob Burrows missed with an attempt to knock it dead and Matty Bowen who had been in great form all night for the Warriors touched down. Matty Smith added the extra two and Wigan were home and hosed 26-12.

Smith wasn’t finished there and added a drop-goal as the clock ticked down. A remarkable turnaround for the Warriors who move up to second, albeit ahead of St Helens’ game with Warrington the following day.