Foxy Bingo Ladies of the League are back in 2015 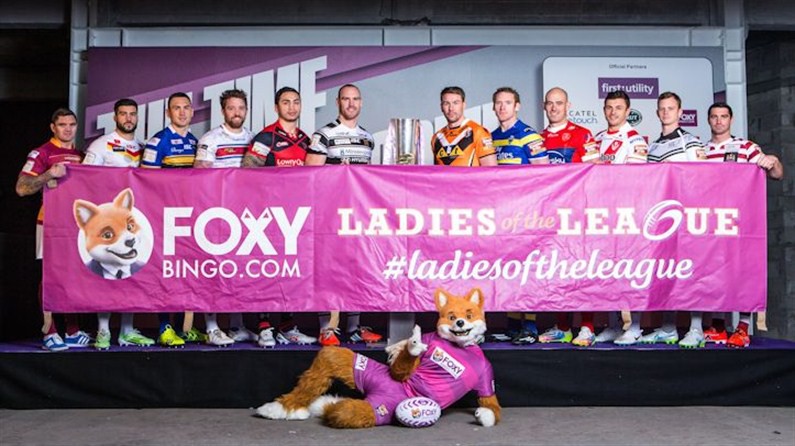 Foxy is on the hunt again for ladies in the rugby league community that are doing great things for the sport, and deserve to be recognised. Last year, over 250 ladies were nominated for the title, and over 3000 votes were cast to find a winning lady. Mandy Ibbison of Wigan St. Pat's celebrated her win at the star studded, Man of Steel Awards with finalists Pat Benatmane, Yvonne, Tara Jones and Catherine Bullock.

Following the success of the campaign last year, Foxy Bingo will be looking to hero plenty more rugby mad ladies in 2015. The winner will once again receive £1000 in holiday vouchers, £1000 donation to a club community project of her choice, as well as the Ladies of the League trophy! She will also enjoy a VIP evening at the Steve Prescott Man of Steel Awards in October with four finalists and their guests!

Perhaps you've got a friend or family member who always goes the extra mile for their rugby league club, at either a grassroots or Super League level? Maybe she is a diehard fan who supports her club come rain or shine, or is she the lady who washes the players' kit every week? If your colleague coaches the kids on a Sunday morning, inspiring the next generation of Super League stars she deserves to be celebrated!

The stars of the Super League have been nominating their ladies of the League. Watch our very own Matty Smith make his nomination by [clicking here]

Make your nomination before Friday 10th April, and you could win a pair of season game tickets of your choice. Foxy Bingo will be giving away a pair of tickets to a fan from each Super League club, so nominate today at ladiesoftheleague.co.uk.

Look out for last years Ladies of the League winner Mandy, and her Wigan St Pat's team who will be on pitch holding the First Utility Super League flag at the DW Stadium on Friday afternoon, to celebrate the launch of the second year of the Ladies of the League community programme.