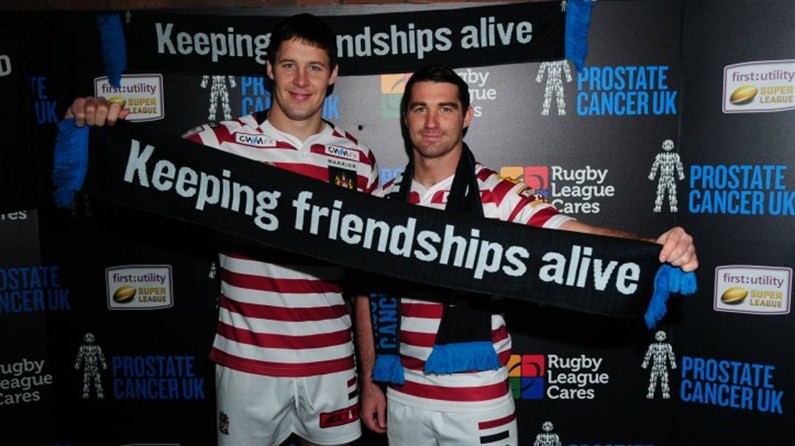 Wigan Warriors, Matty Smith and his First Utility Super League counterparts proudly stand side by side as one super team - Men United - as Prostate Cancer UK today links up with Rugby League Cares.

Men United will mobilise Wigan players and supporters as part of an innovative partnership with Rugby League Cares.

The three-year tie-up with the charitable arm of the Rugby Football League (RFL) will see the forward-thinking Prostate Cancer UK continue to set the tone across the sporting landscape.

Fans of Wigan can win one of two pairs of Magic Weekend Day Passes generously donated by The RFL and Rugby League Cares by joining Men United and completing a short survey.

One of the biggest dates on the calendar, Magic Weekend, will see Prostate Cancer UK’s ever-growing Men United movement take over Newcastle for an unforgettable weekend of entertainment on May 30th and 31st - on and off the St James’ Park pitch.

And as part of the national partnership Rugby League Cares and Prostate Cancer UK will be aiming to raise awareness of a disease that kills one man ever hour in the UK.

By clicking completing a simple survey  fans can show their knowledge at the start of the partnership, and share their friendship stories in tandem with the club’s new campaign promoting mates getting together to do something great to beat prostate cancer.

Chris Rostron, Head of Rugby League Cares, said: "We are delighted to be working alongside Prostate Cancer UK on a partnership that will allow both parties to meet their objectives.

"The health and wellbeing of our communities is something Rugby League Cares proudly supports for everyone in the sport. Our exciting partnership with Prostate Cancer UK provides a platform to raise awareness of a disease that each year affects thousands of men, many of whom will have a connection to rugby league."

"Our fledgling steps in the game have showcased its rich community heritage and we look forward to working with an organisation - and its member clubs - who clearly want to make a difference to men’s health.

"It struck a chord earlier this year when the RFL launched their era, declaring ‘every minute matters’. One man dies every hour from prostate cancer, so that slogan is equally powerful - and pertinent - to us.

"Through club activities from the top of the game to grass roots level, to the wonderful opportunities that Magic Weekend will present us in Newcastle in May, we look forging a powerful friendship that really makes a difference."

Since it was launched 12 months ago, Men United has caught the imagination, and a new zeal for change in men’s health - with more than 200,000 people signing up to pledge support. Men from all walks of life, from footballers to lawyers and politicians to plumbers, have formed a growing army, raising funds to find the answers for the future through research and supporting men now.

Fans of Wigan can join Men United, do something great with their mates to help beat prostate cancer, and have the chance to win a pair of Magic Weekend Day Passes at St James’ Park this May. Join Men United today.