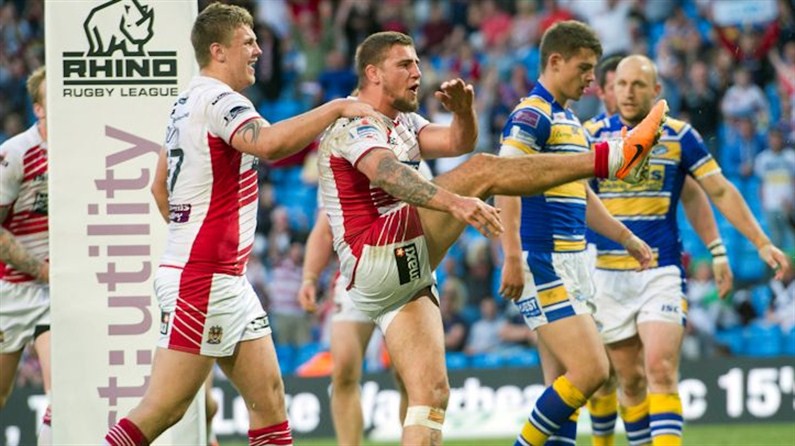 Shaun Wane called this the best win ever of his coaching career, you'd struggle to disagree.

With a lengthy injury list and four players turning out for the Warriors despite not having trained all week due to injury the odds were firmly stacked against Wane's side as they came up against the league leaders.

One of the youngest Wigan sides to ever take to the field had a monumental task on their hands but came up a performance that belied their age and inexperience.

The game started brutally with a fired up Warriors side defending their line repeatedly and they got their reward 16 minutes in when Anthony Gelling brilliantly caught a high bomb to score, Matty Smith converted and soon after added a penalty to make it 8-0.

Tempers then flared with Michael McIlorum, John Bateman and Ryan Bailey sin binned after a brawl, and despite some heroic Wigan defending Ryan Hall scored to cut the deficit to 8-4. However Blake Green's fantastic individual try three minutes from the interval edged Wigan into a half time 12-4 lead.

Things got even better for the Cherry and Whites after the restart, as man of the match McIlorum side stepped Leeds's full back Zak Hardaker to touch down under the posts, Smith converted to make it 18-4. If Wigan were to get the win they'd have to hold on with Blake Green who would leave the action to add to the ever growing injury list.

The Rhinos started to gather momentum and tries from Carl Ablett and Ryan Hall put the boys from Headingley within touching distance.

Joel Moon thought he'd won it three minutes from time for the Rhinos only for the video referee to correctly rule out his effort for a knock-on.

A nail-biting finish ensued but the Warriors held firm and the large Wigan following enjoyed another Magic Saturday at the Etihad.