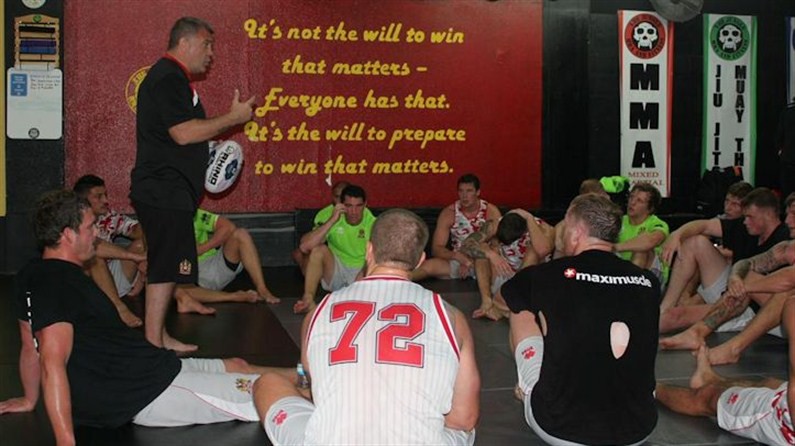 Head Coach Shaun Wane has labelled his side's pre-season camp to the United States as superb.

The Warriors First Team recently returned to the UK having spent 10 days out in Florida as they ramped up their preparations for the 2015 season.

Speaking on his return, Wane said: "It was a superb camp, one of the best yet without any doubt. The players worked really hard in every session. We loaded them up on the GPS system as much as we could and monitored them closely to make sure we gave them rest periods at exactly the right time.

"I was happy with everyone, Dom Crosby trained really well, Lewis Tierney was outstanding and Ryan Hampshire too. There isn't one person I was unhappy with to be honest, they were all superb.

"The lads bonded really well and it was great to see the new guys in the group spending lots of time with the squad. We trained during the day then would head back to different houses at night to explore Orlando and the local area in different groups, it's then that good friendships are made."

The Warriors were joined at training last week by young fan Oliver Waite, a 14-year-old from the UK who had been on a family holiday in the area at the time.

Shaun said: "I had a conversation with Kris Radlinski about a young Wigan fan who was in Florida on holiday, he had been in touch so we let him come down and experience some of the session with us. The lads had a good chat with him and his family, he was very good player and can certainly play a bit."

One player left the camp early with Eddy Pettybourne returning to Australia and being released from his contract with the Warriors. Wane said: "It is a shame that Eddy has had to leave us but it is the right decision. I am a family man and totally understand why he had to leave. I look out for Wigan Rugby League first and foremost but equally I want to take care of my players and I was never going to stand in Eddy's way when his situation became clear. I am more than happy with my squad though, we're certainly not short of options in the front row."

The Warriors were boosted however with young Oliver Gildart committing his future to the Club with a new four-year-deal. Wane was ecstatic saying: "He had a good camp with us and is a talented kid, he sees his future here at his hometown club and that is a huge boost for us. He's going to be a great player for us of that I'm sure."