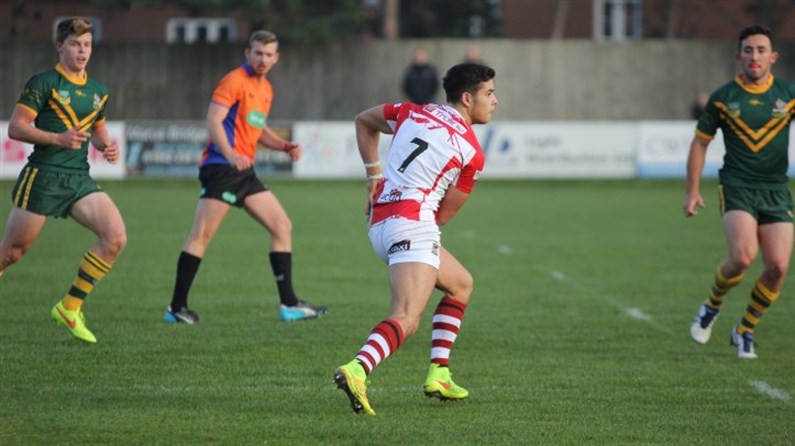 Result from the Solid Strip Community Stadium - 12.15pm kick off

Wigan Warriors Academy went down 36-18 to the Australian Schoolboys this afternoon in a pulsating game at the Solid Strip Community Stadium.

Roared on by the hugely vociferous home crowd, tries from Jamie Doran, Oliver Gildart and Josh Woods plus three goals from Jake Shorrocks gave the Warriors a well-deserved 18-6 lead, but the tourists roared back and eventually won 36-18 as injuries took their toll for the Warriors.

Matty Peet was boosted by having his four England Academy players available, Peet named as strong a side as possible with Lewis Tierney, Jamie Doran and Ryan Sutton all starting.

The game began in brutal fashion with numerous big hits being put in by both sides, and penalties being swapped. Despite inspired Warriors defending from a drop out, it was the tourists who scored first in the 10th minute with Connor Cox touching down in the corner on the last tackle, Brock Lamb converted to make it 6-0.

Wigan, wearing their new Academy Kit for the first time, fought back as great defence forced an Australian knock on, and Jamie Doran brilliantly weaved his way through the visitors rear guard to score under the posts. Jake Shorrocks added the extras to level the game at 6-6 in the 21st minute.

The momentum was with Wigan now and after a fantastic Jamie Doran 40 / 20 kick gave them field position, Oliver Gildart grounded an equally great Doran grubber kick in the 26th minute to give the home side the lead. The Solid Strip Community Stadium was bouncing now and Jake Shorrocks converted again to make it 12-6.

The Cherry and Whites then broke away on the left hand side eventually forcing the tourists to knock on; this territory was exploited by the Warriors as Josh Woods slid in to score with his first touch in the corner following a great passing move. Shorrocks was unsuccessful with the difficult conversion so it stayed 16-6 with five left to half time.

A late tackle by the visitors in the 38th minute gave Wigan a penalty deep in the Australian half; Jake Shorrocks kicked the points to make it 18-6 at the interval.

The Australians thundered out of the blocks after the break and it was more amazing Warriors defending to keep them scoreless for a quarter of an hour. However the pressure eventually told with Latrell Mitchell running in under the posts in the 56th minute, Brock Lamb converted to make it 18-12.

Minutes after the score, tempers flared between both teams with a brawl breaking out in the middle of the pitch, meaning Tevita Cottrell and MacCauley Davies were sent off, with Jacob Liddle also sin binned for Australia.

After the game restarted, the tourists were again next on the score sheet with Keenan Yorston touching down after a flowing passing move on the left hand side. Lamb again added the extras to make it level once more at 18-18 to ensure a gripping last 17 minutes.

The visitors then took the lead with Nat Butcher barging over and Lamb again converting to make it 24-18. This lead was extended with Connor Cox grabbing his second try of the game in the corner, and Lamb's brilliant conversion made it 30-18 with the game into its last ten minutes.

Tyrell Fuiamaono then ran twenty metres to touch down for the final time for the Australians with Lamb adding his fifth conversion making the final score 36-18 to the visitors. The final whistle signalled a standing ovation for both sides from the incredible support at the Solid Strip Community Stadium, thus showing Wigan is a truly special Rugby League Town.