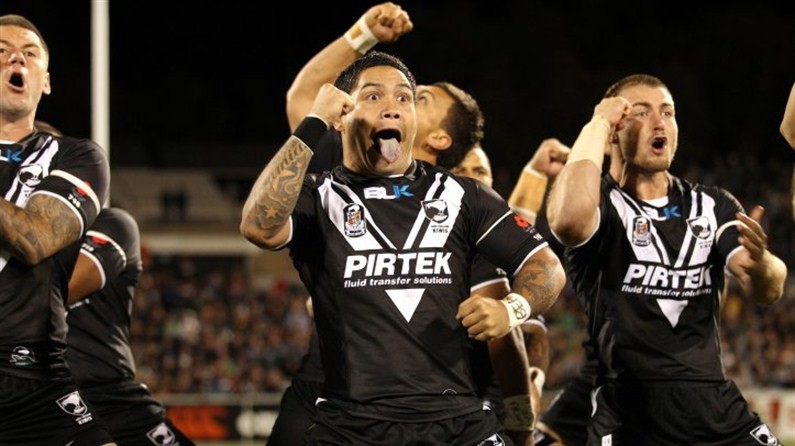 After their fantastic win over Australia, New Zealand welcome Samoa to Whangarei on Saturday knowing another victory will all but confirm their place in the Four Nations Final.

Whangarei's Toll Stadium will host a Rugby League international for the first time against Samoa with hometown favourite Adam Blair set to make his 29th appearance for the Black and Whites.

These two played out an enthralling and memorable game at the Halliwell Jones last year and hopefully this game will be just as good.

Hawera born Issac Luke burst onto the scene with South Sydney in 2007 and narrowly missed out on the Dally M Rookie of the Year Award to Israel Folau after a great season. The Hooker has since made 168 first grade appearances scoring 33 tries making his Kiwi bow in 2008. Luke was part of the 2008 World Cup winning squad, coming off the bench in the Final against Australia and has become a crucial cog for the Kiwis.

Wakefield's Pita Godinet caused England problems last weekend with a brilliant two-try performance and will need to be on top form again this week. The former New Zealand Warrior moves up from the bench for Matt Parish's side.

Sydney City Rooster's Shaun Kenny-Dowall was one of only three ever presents during the Clubs 2013 Premiership winning season, such was his importance to Trent Robinson. The big Centre has crossed for 95 tries in 176 first grade games and was a member of New Zealand's 2010 Four Nations winning side.

Tim Lafai lines up in the Centre position for Samoa having helped Canterbury-Bankstown Bulldogs make the 2014 Grand Final. Lafai made three appearances at the 2013 World Cup and is fast becoming one of the best Centres in the world.

Having made his Melbourne debut in 2008, Kevin Proctor went on to win Young Player of the Year for his Club before making his Kiwis debut in the 2011 Four Nations. A key member of Craig Bellamy's side he will be looking to further enhance his reputation with a big performance against Samoa.

In the opposite pack Frank Pritchard, winner of 27 caps for the Kiwis will come up against his former team mates. Nicknamed ‘The Tank', Pritchard has a wealth of NRL experience and will be vital for Toa Samoa if they are to get the win.

Say what?
New Zealand Second Rower Kevin Proctor on last week's result and preparation for Samoa: "We are not dwelling on the win (against Australia) and are always striving to improve our game. I think the boys have done that, the preparation has been really good this week. I think Samoa look pretty dangerous, we have got to be on our game this week."

Samoa Coach Matt Parish on New Zealand: "It's one of the strongest Kiwi teams I've seen on paper for a long time. But I think if we turn up and play our A-grade game and we play as a team like we did last week we can definitely compete, we just need to fix up a few bits and pieces."