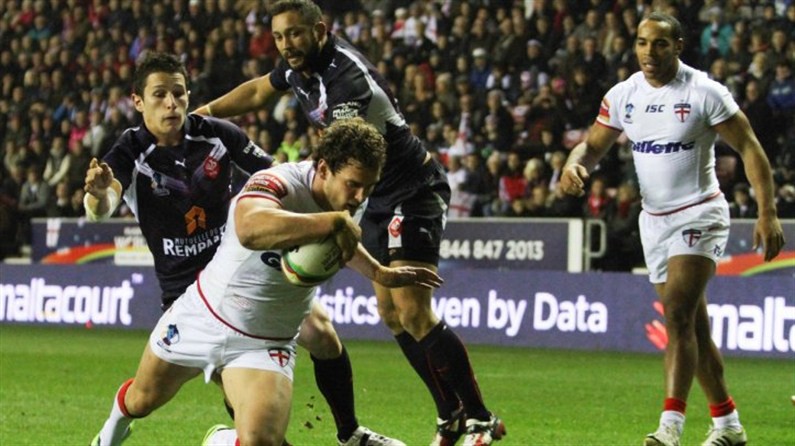 England and Wigan Captain Sean O'Loughlin will face a late fitness test to decide if he can play in England's second Four Nations game against Australia this weekend in Melbourne.

As is standard practise in the Southern Hemisphere, Steve McNamara has today named his side for this weekend's game however changes are allowed ahead of kick off.

McNamara has initially named an unchanged side.England defeated Samoa 32-26 in the tournament's opening match at Suncorp Stadium, Brisbane last Saturday and victory over Australia, who lost to New Zealand in the Brisbane double-header by 30-12,  will see England progress through to the Four Nations final in Wellington, New Zealand on Saturday November 15.

O'Louglin is omitted from the initial team however Liam Farrell, Joel Tomkins, Josh Charnley and Matty Smith all retain their places in the starting line-up.

"We have named the same 17 as last week," said McNamara.

"A few of our blokes haven't been able to train fully during the early part of the week.

"Even though we have named the same side, there could be a change or two at the back end of the week.

"Those that were unable to train are making decent progress. Sean O'Loughlin is definitely improving and we will continue to monitor him throughout this week.

"It is really difficult to name a team earlier in the week. Firmer decision will be made towards the weekend, when we arrive in Melbourne.

"It was a hard-fought win for us against Samoa. There is room for improvement within our game. We had to overcome a very talented and tenacious team with limited preparation in extreme heat.

"I was pleased with the way we dug in and found a way to win in extreme circumstances. We will have to show that same resolve this week."

The England side to face Australia at AAMI Park, Melbourne on Sunday November 2 is as follows (professional club and community club in brackets):