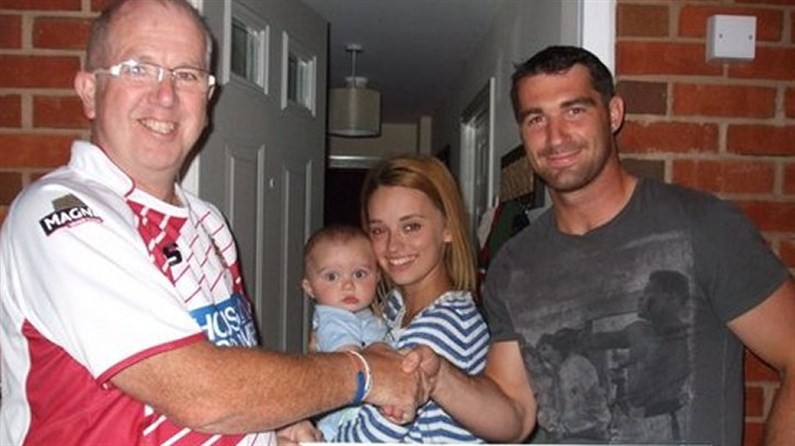 Matty Smith, partner Jenny & baby Sam get a regular knock at their door from Warriors supporter and Lotto agent, Peter Elliot when he is collecting their weekly £1 Lotto subscription.

Recently however, Peter knocked for a different reason though after one of their numbers came out on the weekly draw helping them to win the £1000 first prize.

It adds to a great few weeks for Matty having been named in the Super League Dream Team whilst also signing a new four-year deal with the Club.

Matty and his family have been members for a couple of years now. He said: "I couldn't quite believe it when I got the call to say I'd won!

"A load of the players are members of the Lotto and personally I just love that it supports our youth team as they continue to produce quality young players. It's helped us massively this season and it also keeps me on my toes when you see the likes of Sam Powell, George Williams and Jamie Doran all training and competing with the first team."

Matty's win shows that anyone can take the weekly £1000 jackpot or the £10,000 half-yearly super jackpots.

He added: "It's the old saying isn't it? You've got to be in it to win it and that's so true isn't it. I know thousands of the fans, like the players, are Lotto members already but if you aren't then why not give it a go?"

It could be you getting that great know on your door telling you that you are a winner but to be a winner first you need to be a player so please call Vicky or Joel at LOTTO now on 01942 231321 to join either via a local door to door collector, payment direct from your bank or by a regular payment to the Lotto Office.  Don't forget along with the weekly 1st prize of £1,000 there are two £10,000 half yearly prizes and a roll-over of £250 a week that currently stands at £4,500 plus hundreds of smaller cash prizes weekly.