Sarginson Nominated for Young Player of the Year 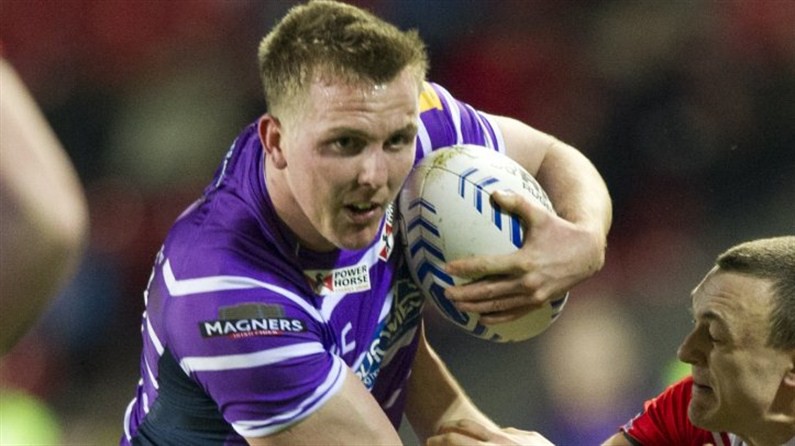 Wigan's Dan Sarginson has been nominated for the Super League Young Player of the Year.

Signed from London Broncos for the 2014 season, Sarginson has been in fine form this season scoring 11 tries in 27 appearances.

An England Knights and Under 18s International, Sarginson joined the Warriors after playing over 40 times in Super League for the Broncos following his debut in 2012.

Wigan Warriors Head Coach Shaun Wane said: "It's credit to Dan that he has done so well in his first season with us. People forget how young he is after the amount of games he played so young at London. He is a very talented player, I like Dan's attitude too and I always notice the extra hard work he puts in."

On the nomination, Dan said: "Obviously it's great to have been nominated for such a prestigious award. You don't play rugby league to pick up individual awards but it is nice to have been recognised, it is a team sport though and it goes without saying the Grand Final is the aim for all of us right now."

The 21-year-old is joined by Leeds standoff or forward Liam Sutcliffe and Castleford's Daryl Clark who is nominated for both Young Player of the Year and the Steve Prescott Man of Steel Award.

Clark has enjoyed an impressive year with Castleford Tigers, helping them achieve their most successful season in the Super League era. The young hooker has been influential in his role and secured his place as one of the sport's promising young talent.

Hill is shortlisted for the first time following an outstanding season for the Wolves. The England prop has been a dominant figure for Warrington in a hard-fought season which sees them currently 80 minutes away from a place in the 2014 Grand Final at Old Trafford.

Veteran Jamie Peacock has been in imperious form for Leeds Rhinos in his 15th Super League season. Peacock's consistency is highlighted by being shortlisted for the award for the last two years and is looking to become only the fourth player to win a second Man of Steel award.

Roby has once again led from the front to guide his St Helens team to be crowned League Leaders. Roby consistently impresses and like Jamie Peacock he will be looking to win the prestigious award for the second time in his career.

The Steve Prescott Man of Steel is chosen by a poll of every Super League player, the results of which are considered by a specially-convened panel featuring a former Man of Steel, representatives from the players' union and one representative each from the written and broadcast media. The presence of four players on the shortlist reflects the players' vote and the expert views of the panel.

The Man of Steel has been presented at the end of every season since 1977 and this year has been renamed in memory of Steve Prescott, one of Rugby League's most respected players who passed away 12 months ago after a long and courageous battle against a rare form of stomach cancer.

The 2014 Steve Prescott Man of Steel Award, Young Player of the Year and a host of other awards will be named at a gala dinner hosted at The Point, the Old Trafford home of Lancashire Cricket Club, on Wednesday October 8.