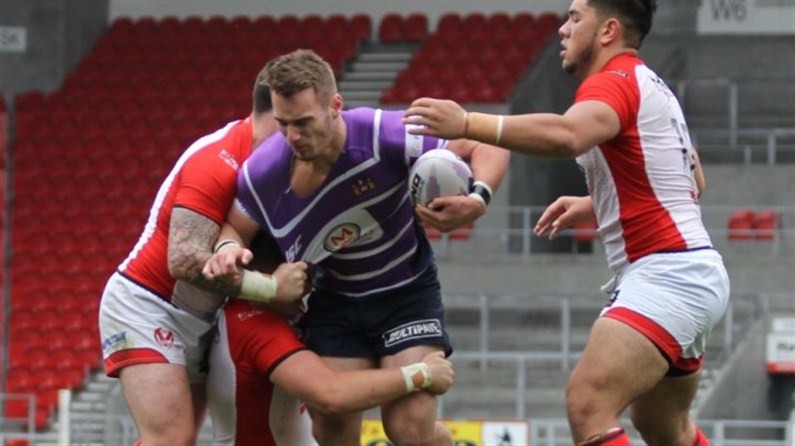 Wigan Warriors Under 19s booked a Grand Final showdown with Warrington with a comprehensive 44-18 victory over arch-rivals St Helens at Langtree Park.

Down 12-0 early on, Wigan hit back with two tries from Liam Forsyth and Grant Beecham helping them go in 18-12 to the good at half time. Wigan looked the dominant team and pressed home their advantage in the second half as both Liam Marshall and Lewis Tierney crossed for two tries each with the impressive Ryan Hampshire finishing off the scoring with a try in the final minute of the game.

Matty Peet brought Lewis Tierney into his starting line-up on the Wing after coming back from injury last weekend on the bench. Hooker Luke Waterworth was back in the team too, one of four substitutes named by the Warriors.

This encounter started as you'd expect with plenty of big hits and bone crunching tackles on display. In the sixth minute Wigan conceded a penalty deep inside their own half for obstruction and Saints' number 10 Matty Fozard bulldozed over from close range to take the first four pointer of the afternoon. Lewis Charnock added the extras and Saints were 6-0 up early on.

Wigan looked for a way back into the game but couldn't get over the line despite at one point forcing back to back penalties in the Saints' half. The hosts extended their lead in the 18th minute when Matty Fleming skipped over from just a couple of metres out. Lewis Charnock put the difficult conversion between the uprights and Saints led 12-0.

Territory was crucial and Wigan were starting to win it slowly but surely. Ryan Hampshire was growing into the game and it was his brilliant short ball that deceived the Saints defence and allowed Liam Forsyth to burst through the line and go over from 40 metres out. Hampshire converted Wigan's first try to pull it back to 12-6.

Great defence from the Warriors forced Saints to handover just inside their own half. Wigan set about asking a series of questions of the home side's defence and quick hands from Jake Shorrocks and Ryan Hampshire allowed Liam Forsyth to cross for his second in quick succession. Hampshire goaled and the teams were all square.

Looking the more dominant team, Wigan were looking to take the lead before half-time and did so through Grant Beecham. The big second rower on the end of a good move close to the Saints line to dive over. Ryan Hampshire added his third goal of the afternoon and Wigan led 18-12 as the referee blew for half time, a chance for the players and fans to catch their breath after an engrossing 40 minutes of rugby league.

The Warriors probably didn't want half time to come with the momentum they had. The break didn't stop them though as from a scrum just inside the Saints' half in the second minute of the half, the ball moved left to Liam Marshall who showed a clean pair of heels to his opposite number before sidestepping the Full Back and going in for the try. Hampshire goaled from the touchline and Wigan led 24-12.

Matty Peet's side continued to dominate and extended their lead just four minutes later as pressure up the middle forced the Saints defence inside, Wigan moved the ball to the right and Lewis Tierney crossed for his first try since coming back from injury. Hampshire added yet another two points from the touchline to make 30-12 to the visitors.

With ball in hand Ryan Hampshire at times looked unplayable and he turned provider again in the 61st minute as a run across the Saints' line caused disarray allowing Liam Marshall to go in for his second of the afternoon. Hampshire just pulled the conversion wide but Wigan still led 34-12 and looked to have the game won.

On the back of a penalty for a late challenge on kicker Jake Shorrocks, Wigan were in again as Lewis Tierney darted over on the right wing to extend the lead. Hampshire couldn't quite add to his tally, Wigan now leading 38-12 with just over ten minutes of the game remaining.

Lewis Galbraith grabbed a late consoloation for Saints in the 75th minute as he went over in the corner, Dave Hewitt adding the two.

Wigan were to have the last say though as Ryan Hampshire showed his class with a neat one-two with Liam Marshall to go in under the sticks. Rocky converted his own try and Wigan where finished at 44-18.