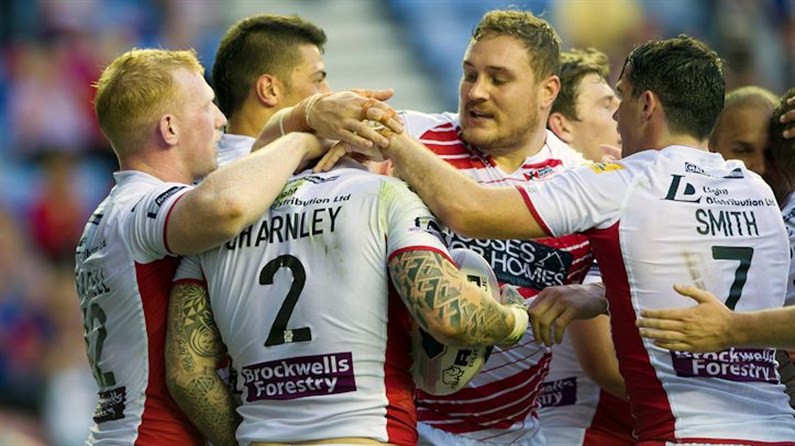 Result from the DW Stadium - 8:00pm kick off

Wigan Warriors got the Bradford result out of their system with a convincing win over the Salford Red Devils at the DW Stadium.

Anthony Gelling scored a hat-trick in a man of the match display, as the Cherry and Whites ran in eight tries in total. Matty Bowen, Josh Charnley, George Williams, Tony Clubb and Matty Smith all got in on the scoring, as the Warriors moved up to second place in the First Utility Super League table.

Warriors Coach Shaun Wane made two changes to the starting line-up, with Anthony Gelling and Tony Clubb replacing Darrell Goulding and Dom Crosby. Returning Warrior Joel Tomkins was one of three changes to the bench, with Gil Dudson and Jordan James also named as replacements.

The match started off as a bit of an arm wrestle, with both sides squaring each other up. There were some heavy tackles made, as each side looked to get dominance in the forwards.

Defences were on top for the first ten minutes, but the deadlock was broken in the 12th minute as video official Ben Thaler correctly ruled that full-back Matty Bowen touched down Matty Smith’s neat grubber kick. Smith was on hand to convert in front of the posts to make it 6-0 to the Warriors.

Wigan were nearly in again with the same play being utilised, as a grubber kick was just out of reach for the diving Warriors. The Red Devils had their own chance to hit back but it was great Wigan defence to keep Junior Sau out as a try looked certain.

The DW Stadium thought the Warriors had their second try in the 22nd minute, as an interception eventually saw Josh Charnley clear, but referee Phil Bentham pulled him back as he had deemed a knock on took place in the ball steal, to leave the score at 6-0.

With ten minutes to half time, Wigan brilliantly retrieved a short goal line drop out to have great field position. This was exploited as Anthony Gelling powered in at the corner following a slick passing move from the Warriors, Matty Smith could not kick the difficult conversion to leave the score at 10-0.

Josh Charnley was next to get in on the scoring a few minutes later as he and earlier scorer Gelling combined brilliantly on the right hand side, to ensure the winger ran in his fifteenth try of the season for the Warriors. Smith kicked the extra two points to make it 16-0 with six minutes left to the interval.

The visitors tried again to post their first points in the 37th minute, as they gained a scrum just metres from the Warriors try line. However the attack was repelled by some fantastic Wigan defence, as the hooter sounded to signal half time with the score 16-0.

Ben Thaler was again called upon in the 42nd minute to give Anthony Gelling his second try of the night, as the centre brilliantly powered through numerous defenders to touch down in the corner. Matty Smith produced a great kick to add the additional two to make it 22-0 to the Warriors.

It was only last ditch defending from the Red Devils which stopped another Wigan score in the 54th minute as Matty Bowen carved through the Salford line, but was dragged down metres short.

The DW Stadium then produced a rousing reception for the returning Joel Tomkins, as the new number eleven entered the fray for Wigan. Tomkins’s introduction was sandwiched into another video referee call, this time Ben Thaler ruled out a Matty Smith try for obstruction to leave the score still 22-0.

Warriors winger Josh Charnley showed fantastic pace to stop Niall Evalds, as the Red Devils full-back raced away stopping a certain try. However Salford were not to be denied in the 62nd minute, as the video official deemed Josh Griffin touched down the bouncing ball to score in the corner. The conversion was unsuccessful leaving the score at 22-4 to Wigan.

Matty Smith then showed his composure minutes later, as he kicked a drop goal to extend the Warriors lead to 23-4. Anthony Gelling then completed his hat-trick as he collected Matty Bowens pass to stroll in to score, Smith was again imperious with the boot to convert and make it 29-4.

George Williams was next to score, as he twisted and turned the Salford Red Devils defence in different directions to complete a remarkable individual try, Matty Smith again kicked the extras to make it 35-4 to the Warriors with nine left on the clock.

It was one way traffic for the Cherry and Whites as a passing mix up by the Red Devils meant the ball going behind the Salford attackers, and Tony Clubb kicked forward and chased to touch down, Smith as usual converted to make it 41-4 with just under five minutes left.

Matty Smith then scored in the corner after a good play from the Warriors once again opened up the visitors defence, however he could not kick the extras to leave the score at 45-4 going into the last minute.

Wigan played out the remaining few seconds to a close out the comfortable win and move up to second in the First Utility Super League table.