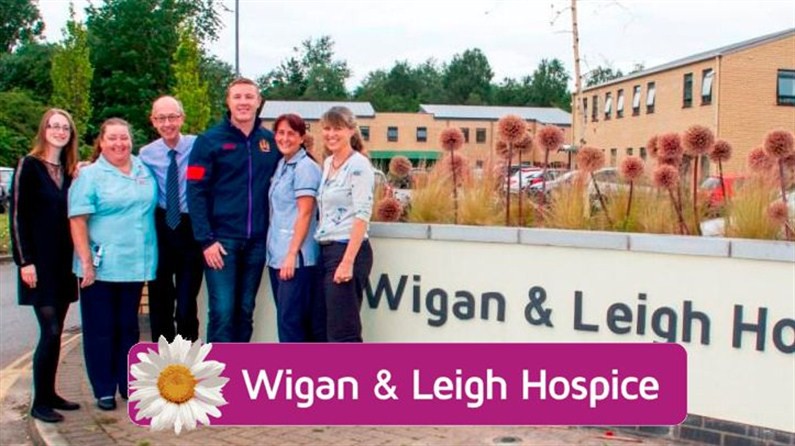 A fundraising partnership has today been agreed between Wigan Warriors Community Foundation and Wigan and Leigh Hospice.

On the pitch before the Wigan Warriors v Salford Red Devils game, which was dedicated to the Hospice, Wayne Joyce from the Foundation and Maxine Armstrong from the Hospice signed a long-term partnership agreement.

The two charities will now work together to raise funds which will be ploughed back into helping the local community.

A joint steering group will be established to manage the relationship which will focus on delivering three key fundraising events every year. The first of these will be the Hospice Warriors Colour Run on September 14th at Robin Park.

This brand new event will see people get covered head to toe in different colours of powder paint as they walk, jog or run around a 5K track.

Paint stands will be placed along the route with one manned by Wigan Warriors players who will throw the powder paint or use a specially adapted fire extinguisher to cover participants in powder paint as they go past.

Proceeds from the event will be shared between Wigan and Leigh Hospice, which supports over 1,000 people with a life-limiting illness every year, and Wigan Warriors Community Foundation which strives to empower, engage and raise the aspirations of both young people and adults through education and sport.

Fundraising and Lottery Manager for the Hospice, Maxine Armstrong, said: "The Hospice has always had an excellent relationship with the Club and when we met a few months ago we felt as though there were opportunities to work together which began with the dedicated game and have resulted in a long-term partnership.

"We are thrilled that we are beginning to work with the Foundation to support each other and ultimately achieve our joint aim of helping more people in our local community."

Warriors Rugby General Manager Kris Radlinski said: "We are proud to be working with Wigan and Leigh Hospice to help generate vital funds to help sustain each of the charities.  Although we are very different in who we aim to support we share a common goal in caring for and helping the well-being of our local community.

"With this in mind our aim is to build a long and successful partnership to ultimately help sustain the great work we both do for many years to come."

As part of the new partnership Warriors players will regularly visit the Hospice to speak to patients or volunteer. They will also attend Hospice events, such as the Garden Party held in the Hospice grounds on August 9th.