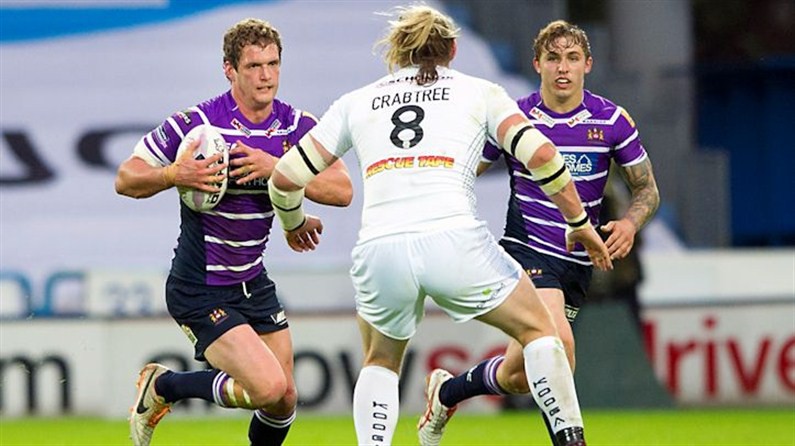 Result from the John Smith’s Stadium - 8pm kick off

Wigan lost only their 2nd game in 13 as they went down to Huddersfield on a cold evening in West Yorkshire.

The Warriors started brightly and were 12-0 up after 18 minutes before the Giants charged back into the game. Leading 18-12 at half time the home side finished the game comfortable winners. Shaun Wane will be happy with the effort of his young side but know that they have some things to work on this week at the training paddock.

Captain Sean O’Loughlin returned after a month on the sidelines with an abductor problem whilst Matty Bowen also came back into the fold. Michael McIlorum (knee) and Dan Sarginson (rib) missed the game after picking up knocks in the win over Salford. George Williams and Darrell Goulding were promoted from the bench where Ryan Hampshire started, Ryan Sutton was rested. Huddersfield were without Craig Kopczak and Jodie Broughton due to injury.

Huddersfield finished top and completed the double over Wigan in 2013 during the regular rounds, Wigan did however beat the Giants on their own turf in the play offs and went on to claim the Super League title on that magnificent night in October at the Theatre of Dreams. The Giants beat the Warriors at the DW Stadium earlier in the season and were looking for another league double.

The home side had the first half chance as Danny Brough pounced on a loose ball 40 metres from the line and tried to release Aaron Murphy but pressure from Dom Manfredi saw the Giants squander their chance. Sam Powell then thought he’d scored but for referee Thaler to bring it back for crossing. The opening ten minutes remained scoreless.

It was going to take a good set play to open up the Giants defence, up step Sean O’Loughlin. The Warriors Captain played an integral part in a great move down Wigan’s right hand side. Matty Bowen started the move and found John Bateman who had O’Loughlin in support, the ball moved wide to Dom Manfredi who then put O’Loughlin back on the inside for the opening try of the night. Matty Smith added the conversion and the visitors led 6-0 after 12 minutes.

The Giants wanted the next points however they didn’t help themselves after giving away a cheap penalty for tripping Matty Bowen at the play of the ball just inside the Wigan half. A kick to touch and Wigan were able to start a good attack close to the Giants line. The ball moved from the left wing over to Bowen who jinked inside several Huddersfield defenders to go over for a brilliant try. Smith again on hand with the kick to make it 12-0 after 18 minutes.

Into the 22nd minute and Dom Manfredi was adjudged to have knocked on after collecting a wayward Brett Ferres pass. Huddersfield started a set of six inside the Wigan half for the first time and took full advantage. A sublime Danny Brough pass took several players out of the mix and found Winger Aaron Murphy who went in at the corner. Brough goaled and it was 12-6.

Huddersfield were starting to build some momentum and Larne Patrick nearly grabbed his side’s second try but for a knock on over the line.

Wigan then knocked on in midfield before being called offside at the resulting scrum resulting in more Huddersfield pressure. Shaun Wane’s side defended a set on their own line only to concede a penalty for taking a player out from the high kick on the last. The Giants didn’t need a second invite as Shaun Lunt barged over from dummy half close to the sticks. Brough levelled the match at 12-12 with 30 minutes on the clock.

The home side were really starting to motor and took the lead for the first time in the 33rd minute. A good attack down the left hand side had the Warriors pegged on their own line and Danny Brough found Joe Wardle who snuck through a gap to score. Brough again on hand with the kick to make it 18-12.

Wigan tried in vain to get back on level terms as Huddersfield answered the questions asked of their defence in a couple of sets on their own line. The home side then nearly added to their lead when Aaron Murphy made a break up the middle, the Winger was stopped by Joe Burgess and came off second best after a nasty clash of heads. Half time Giants 18-12 Warriors.

The Warriors had a chance early in the second half as Jermaine McGillvary failed to deal with a Matty Smith bomb and Joe Burgess looked to collect and cross for the four pointer. Video referee Richard Silverwood was rightly called on and Burgess saw his effort chalked off for a knock on.

Wigan then gave away the ball in the middle of the park with a forward pass. The Giants looked to attack from the scrum as Brett Ferres carried the ball across the park to the left wing, the big England Second Rower then managed to release Joe Wardle and the Centre ran in from 40 metres out. Brough on target for the fourth time made it 24-12 and the Warriors had half an hour to turn it around.

Down two converted tries Wigan then spilled possession and again handed the Giants reasonable field position. The Giants were now on top and starting to win the collision, their big pack led by Eorl Crabtree charged down the park allowing Danny Brough time and space to slot over a drop goal from close range to give his side a 13 point advantage.

John Bateman then helped relieve some pressure for the Warriors with a half break inside his own half before winning a penalty as Huddersfield tried to slow the play down. Wigan moved up field and on the last tackle a high hanging kick from Matty Smith was claimed in the corner by Dom Manfredi. The Warriors claimed their first score in over 40 minutes but Smith missed the difficult extras, 25-16 to the Giants.

The Warriors were not out of this one and won a penalty for Brett Ferres interfering at the play of the ball before forcing a drop out from the home side. Wigan were unable to get over the line though and Huddersfield led by 9 with just a quarter of an hour remaining.

Huddersfield then struck a crucial blow. Joe Burgess found himself in possession on the last and an attempted kick went wrong falling to Jermaine McGillvary who tip toed down the touch line and ran 50 metres to score. Brough added to his tally and the Giants were now 31-16 to the good.

With just two minutes remaining quick hands by the Warriors allowed Joe Burgess to speed in on his wing from close range. Smith kicked the conversion and the game finished 31-22.

Wigan will be looking to bounce back next Saturday when they take on Castleford Tigers in the Tetley’s Challenge Cup Quarter Final back home at the DW Stadium.