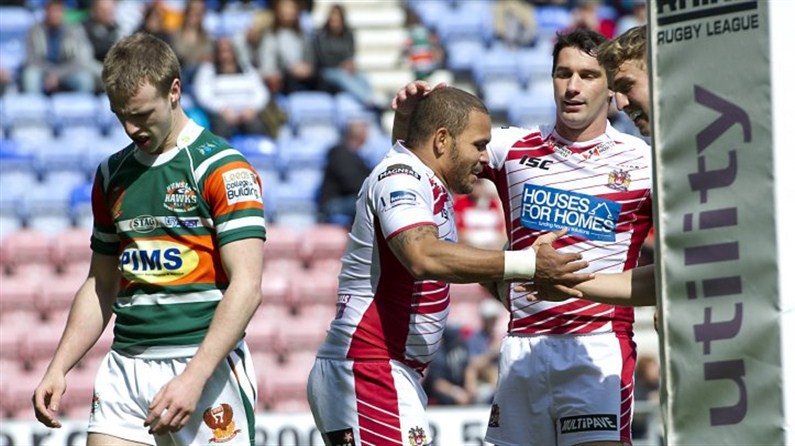 Result from the DW Stadium - Tetley’s Challenge Cup Round 5

Wigan Warriors booked their place in the last eight of the Tetley’s Challenge Cup with a 52-8 win over Hunslet Hawks at the DW Stadium on Sunday afternoon.

The home side raced into a 24-0 lead inside the opening 12 minutes but full credit to the Championship One side who not only managed to score a couple of tries themselves but also had a spell either side of half time where they were able to put the brakes on the Wigan succession of points. Indeed in the second half Hunslet only conceded 10 points against the Challenge Cup holders.

Matty Bowen grabbed a hat-trick of tries, Matty Smith a brace in a nine try display and eight conversions with an own 24 point haul. George Williams, Liam Farrell, Dan Sarginson and Jordan James were the other Warriors try scorers.

Wigan made five changes from the side that defeated Bradford Bulls here on Easter Monday but still named a strong side which included Matty Bowen, Matty Smith, Scott Taylor, Liam Farrell, John Bateman and Tony Clubb. The Hawks included in their side former Wigan Junior Danny Maun but were without former Wigan trio Andrew Ballard and James and Thomas Coyle.

Wigan took the lead on 3 minutes, Scott Taylor with the break down the middle and he had George Williams on his shoulder to cross for the try under the posts. Smith added the goal, the Warriors off and running, 6-0.

A couple of minutes later a Burgess break down the left opened the Hawks defence and this time Matty Bowen was in support for the home side’s second try of the game, Smith again with the conversion, 12-0.

Wigan made it a hat-trick of tries on 7 minutes, this time Bateman with the break and Matty Smith in support, Smith added the goal, 18-0.

Four minutes later and this time Liam Farrell was in for Wigan’s fourth try under the posts, the home side finding gaps in the Hunslet defence and were on a roll. Smith added the goal, 24-0.

At the other end an interception from Danny Grimshaw 20 metres out and the visitors were in for a try to huge applause from fans of both sides. The conversion was missed by Danny Ansell, 24-4.

Normal service was resumed on 16 minutes, Bowen in for his second try of the game, Smith continued with his 100% kicking with the goal, 30-4.

Full credit to Hunslet, the Hawks were in for their second try on 19 minutes, a clever kick to the corner and Winger Lee Mapels was on hand to touch the ball down , the conversion was missed, 30-8.

Hunslet conceded two penalties which put Wigan into a great attacking position, Matty Smith grabbed his second try of the afternoon with a dummy close to the line, Smith hit the extras, 36-8.

Smith combined with Matty Bowen to send the Aussie in for his hat-trick try on 27 minutes, Smith added an easy conversion, 42-8 and that’s the way it stayed until the break.

Wigan added to their score on 46 minutes, clever foot work by Dan Sarginson and the Centre was in for the Warriors eighth try of the contest and their first in nearly 20 minutes, this time Smith missed the conversion, 46-8.

Williams came close on 69 minutes for a further Wigan try but was held just short by Hunslet defensive line.

Wigan brought up the 50 points as Jordan James was in for the home side’s ninth try of the contest, Smith struck the conversion to make it 52-8 and that’s the way it ended.

The Hunslet team and fans a credit in what proved to be a much closer contest than had appeared likely early on after Wigan’s dominance.