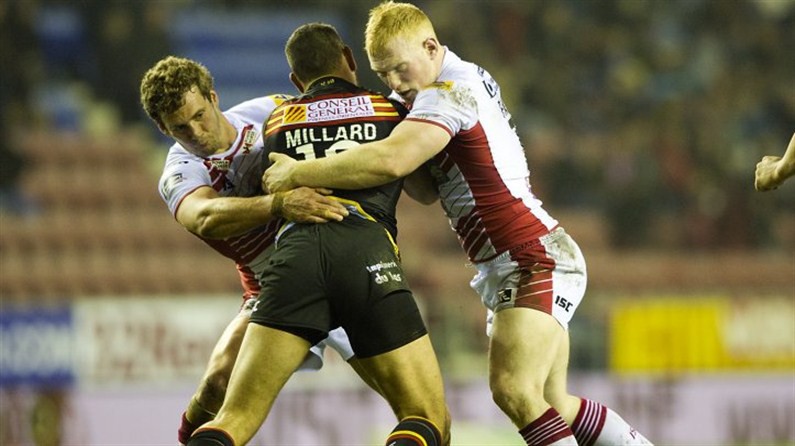 Result from the DW Stadium -

Wigan snatched a dramatic late win as they defeated Catalan Dragons 22-16 at the DW Stadium on Friday night, the hero Matty Bowen with two tries, his second with two minutes to go securing the win.

It looked as if the points would be shared at 16 al,l until Bowen found a gap in the Dragons defence and raced away from near half way to complete a dramatic comeback.

Wigan trailed 0-10 and then 4-16 early in the second half but a brace from Bowen and tries from Charnley and Farrell with three goals from Matty Smith made sure of three wins in a row in Super League for Shaun Wane’s men.

Wigan welcomed back Skipper Sean O’Loughlin to the side after missing the last three games with a shoulder injury, meanwhile Michael McIlorum missed out and completed his three game suspension. The Dragons welcomed back to the side Centre Daryl Millard.

The visitors got off to a sensational start with a near length of the field try on 4 minutes, the Dragons keeping the ball alive with some excellent passing, seven or eight players involved with Full Back Morgan Escare the last man to receive the ball and cross the Wigan try line for the opening score. It was Escare that started the move less than 20 metres from his own line and on numerous occasions it looked as if the Warriors had stopped the Catalans in their tracks , this one a real contender for one of the tries of the season. Thomas Bosc added the conversion, 0-6.

The Dragons were in again on 10 minutes, Wigan penalised inside their own 20 metres and with quick hands to the right the home defence was split once more, this time Centre Ben Pomeroy squeezing over on the right hand side. This time Bosc missed a difficult conversion, 0-10.

Wigan looked for a way back into the game but were unable to find any rhythm with ball in hand, getting into a good position on a couple of occasions, Smith with a kick through that was too strong and going dead and then Taylor with a knock on with the Warriors pressing the Catalan line.

Wigan continued to ask some questions of the Catalan defence, Pryce forced to concede a goal line drop out and eventually on 28 minutes the Warriors were able to get on the scoreboard, Matty Bowen in a gap from a short ball, the Full Back in for his third try for the Club. Matty Smith missed the goal from out wide, 4-10.

Wigan fans were less than happy at the break, Catalan guilty on several occasions of being off side but it was Wigan who Referee Tim Roby penalised for being too quick off the mark at the play the ball, somewhat ironic. At half time Catalan led with a six point advantage.

A high kick from Leon Pryce as the rain started to fall put pressure on Matty Bowen who was unable to keep hold and it was Escare again on hand again to grab his second try of the game on 46 minutes. Thomas Bosc added the extras, 4-16.

Wigan needed the next score and they got it on 62 minutes, this time a slick move to the right and it was Winger Josh Charnley who was able to dive in at the corner underneath the advancing Dragons defenders, good well worked try. This time Smith hit a superb goal, 10-16.

Wigan were denied a further try on 59 minutes, Burgess in the corner but there was a forward pass in the build- up. Another forward pass on 65 minutes this time to Charnley as the Warriors looked for points to draw level.

On 66 minutes the Wigan possession and pressure finally told and the French side were unable to stop Liam Farrell from scoring Wigan’s third try of the game just to the left of the posts, Smith hit his second conversion and the contest was locked at 16 all.

Catalan were caught off side on 72 minutes and Matty Smith was given the opportunity from 35 metres out with the two points, his effort narrowly wide.

Wigan desperately tried to find position for the one pointer and then thought they had found a gap on the left for a possible try but Burgess was bundled into touch as Catalan held on.

With two minutes left, Bowen found space and a gap and raced away for his second touchdown of the game and Wigan had won, Smith added the conversion and it ended 22-16 to the Warriors.

All smiles as Matty Bowen scores his second try of the night and secures the win over Catalan Dragons.