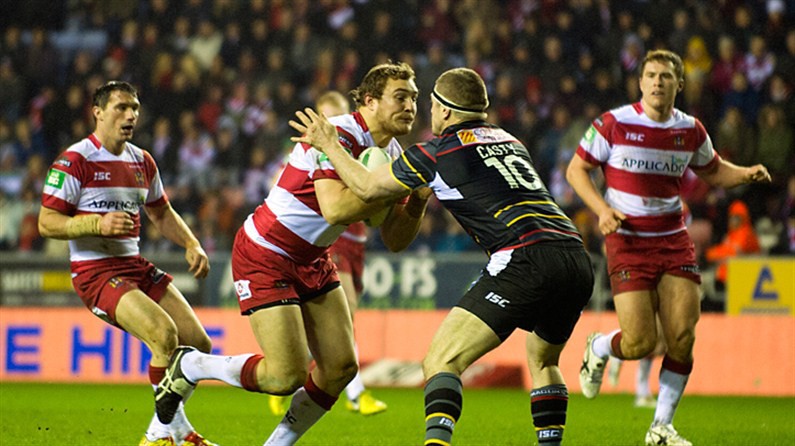 With two wins in a row, the Warriors look to make it a hat-trick success with victory over the Catalan Dragons at the DW Stadium on Friday night in the First Utility Super League.

Wigan have moved upto 6th in the table win a home win over Hull KR and away derby success at Warrington last Thursday. The Catalan Dragons head across the channel boosted with their first win of the season last weekend with a convincing home success over an out of sorts Huddersfield Giants side.

The Dragons have suffered early season with injuries to key players Scott Dureau and Ian Henderson while others have missed out through suspension, former Warrior Jeff Lima completes a two match ban by missing tonight's game.

Looking ahead to Friday's game Shaun told us he is expecting another tough battle against what will be a determined French side,

"They were very aggressive against Huddersfield and they will have got some real confidence from that game. Huddersfield were not at their best but Catalan were tough, they threw numbers into their contact. We know what we need to do to win the game, we have shown the players some footage today and they will be ready and raring to go and good for Friday.

"They have some tough players in their side, the likes of Elima and Baitieri, good Super League players, and our players and their players have clashed a few times and we remember what happened to us last season the week before Wembley. This is an important game for us on the back the win over Warrington and we want to start to put some performances together now and this is the next one."

On the Catalans differing home and away form, Shaun added,

"They are very difficult to beat over there and they seem to get away with alot more at home. They missed Louis Anderson when he was out and their halves are playing well and the hooker Pelissier was outstanding against Huddersfield and they do possess some quality in their side. If we defend like we did against Warrington and attack with the same composure then we will trouble Catalan."

Pictured is Wigan Prop Gil Dudson coming head to head with Remi Casty in the 2013 meeting at the DW which Wigan won 38-0.