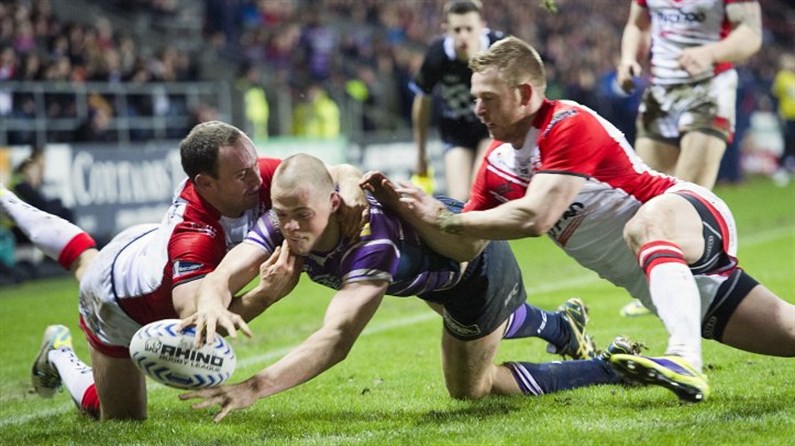 Wigan concluded their pre-season programme with an excellent 16-28 win against St Helens at Langtree Park on Friday night.

Although a pre-season game this local derby still had plenty of thunder as both sides looked to get the better of their nearest rivals. Both sets of players were fully committed in a game that had some quality tries and some big hits in defence, a great workout with opening Super League clash to come against Huddersfield Giants in just seven days time.

Both sides named strong line-ups with Wigan giving debuts to Matty Bowen, and Tony Clubb with Eddy Pettybourne coming on off the bench with fellow new additions John Bateman and Jordan James.

It was the home side with the first score with just 4 minutes on the clock, Saints picking up a loose ball in midfield and Adam Swift raced away unopposed from half way for the try, Luke Walsh added the conversion to make it 6-0.

Wigan almost hit back immediately, Joe Burgess coming close down the right but Saints defenders across to cover.
The Warriors continued to press the St Helens line with some fluid attacks forcing a couple of goal line drop outs and penalties as Wigan had a spell where they lay siege and the momentum finally told on 21 minutes as a short pass from Blake Green on the shoulder of Liam Farrell sent the second rower in for the visitors first points of the evening. Matty Smith added the conversion to level the game at 6-6.

Another Wigan attack put a pass from Darrell Goulding was just behind Burgess, at the other end Matty Bowen was called upon to cover a grubber kick through as Saints looked for more points.

Saints were reduced to 12 men when Alex Walmsley was sent to the sin bin for persistent interference.

With 36 minutes on the clock a kick from Luke Walsh was spilled by Joe Burgess and it from the same set James Roby crashed over for St Helens from close range for the try. Walsh added the goal, 12-6.

A competitive first half ended with the home side holding a six point advantage.

It took Wigan just 5 minutes to take advantage after the break, Saints penalised and Wigan with quick hands to the right, Ryan Hampshire on for Bowen with a perfect pass to send Joe Burgess in for the Warriors second try and Matty Smith hit a great conversion from the corner to level the game once more at 12 all.

Wigan were playing some great rugby and a kick over from Smith which he re-gathered opened up the home defence and Logan Tomkins pass sent in Blake Green under the sticks in front of the travelling fans for the Champions third try, Smith had a simple conversion, 12-18.

This time it was Saints who reacted on 52 minutes, with an attack down the left a great off-load from Jones provided winger Adam Swift his second try of the contest, this time the conversion from Luke Walsh struck the posts, 16-18.

Wigan were called on defensively for a spell as the home side looked to seize the initiative as the Warriors by now had used all the squad for the game with a number of the bigger names now watching on the side-lines having had a useful workout.

And it was Wigan who after been under pressure were able to break away with a well worked try, Williams and Thornley this time working well and Joe Burgess was on hand to squeeze in for a try in the corner, his second of the match, this time Ryan Hampshire missed the goal but it was 16-22 in favour of the Warriors with just five minutes remaining.

With a couple of minutes left Gil Dudson squeezed over from close range under the posts and with Hampshire this time adding the goal, it ended in a 16-28 Wigan success.