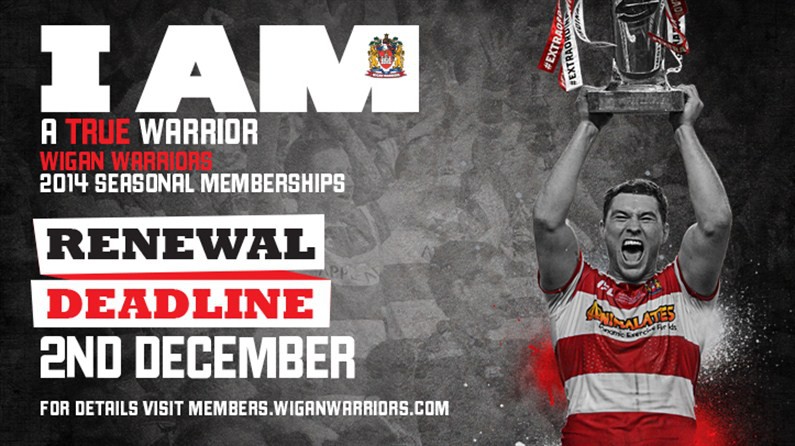 The renewal deadline for Wigan Warriors Seasonal Memberships is now just 7 days away but fans can win an exclusive prize by securing their seat early.

Fans who held a Seasonal Membership during the 2013 season have until 5pm next Monday (2nd December) to secure their seat at the renewal price. However, supporters could be in with the chance of winning an amazing money can't buy prize by renewing before noon this Wednesday (27th November).

All Wigan fans who have renewed their Seasonal Membership by this point will go into a free prize draw to win the chance to be one of 3 fans who will have the first opportunity to buy a Wigan Warriors 2014 replica home shirt.

The 3 lucky winners will be announced on Thursday morning and will have the opportunity to meet some of the Warriors first team stars before skipping the queues to have the first chance to purchase their new shirt at the official launch event in early December.

Wigan Warriors 2014 Seasonal Memberships offer better value than ever before and include some great new features including the Sky Swap scheme, a dedicated family section and much more. To renew visit your personalised warriors Membership page [click here]