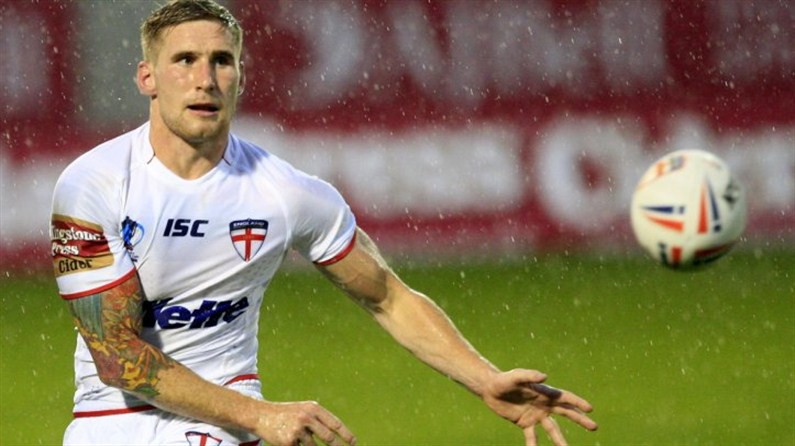 Sam Tomkins is relishing the thought of playing in front of a huge crowd against Ireland at The John Smith's Stadium, Huddersfield, on Saturday (2.30pm) after England's encouraging performance against Australia in the Rugby League World Cup 2013 opener.

The full-back, who is England's all-time leading try-scorer, believes Steve McNamara's team has what it takes to win RLWC2013, and is desperate to do so before he leaves for the shores of New Zealand.

"Our preparations for the game on Saturday are coming on well, especially off the back of a good performance against Australia," said Tomkins.

"We have reviewed the game and seen where we came up short so we will put that right and I think we will be in really good shape for this weekend.

"We gave Australia too much of the ball last week so we need to keep hold of it a bit better against Ireland on Saturday but our completion rate was really good when we did have the ball.

"We probably let them off the hook a bit with a couple of penalties so our discipline will also be something we are looking to improve this week."

Tomkins is enjoying playing in the tournament so far and has been encouraged by the support from the England fans. He has no doubt that the capacity crowd will be right behind them again in Saturday's sell out game.

"We all watched the Ireland v Fiji game and I was impressed by the turnout. I know that a lot of tickets have been sold for this upcoming game and our last group game against Fiji as well, which is fantastic.

"I have never played at Huddersfield when there has been such a big crowd and every time we have played so far in the tournament the crowds have been really supportive, so to go there and have a full house is going to be great. We are all looking forward to it."

All tickets for England's match against Ireland at Huddersfield are sold out but there are a limited number of tickets available for the remaining group game against Fiji at the KC Stadium, Hull.

Tickets for the England v Fiji RLWC2013 Group A game at the KC Stadium, Hull, are available from as little as £15 for adults and £7.50 for concessions. To purchase your ticket, please either visit http://www.rlwc2013.com/tickets or call the 24-hour ticket hotline on 08448472013