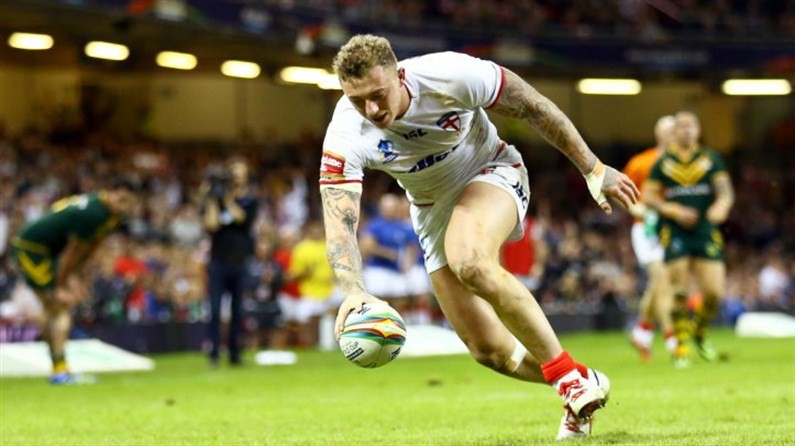 England produced an heroic performance in a noble defeat by tournament favourites Australia in a thoroughly-entertaining opener to the 14th Rugby League World Cup.

Steve McNamara's men stormed into a 10-0 lead after 19 minutes thanks to tries from threequarters Ryan Hall and Leroy Cudjoe.

They were good value for their lead after rocking the Kangaroos with a combination of aggressive defence and enterprising attacking play and, even after the visitors struck back with four tries in a devastating 18-minute spell, they stayed in the contest to play a full part in a rousing start to the tournament.

The defeat should not damage England's hopes of getting out of the group, although it almost certainly means that holders New Zealand - Sonny Bill Williams and all - will stand in their way of reaching the final and a mouth-watering re-match with Australia.

Certainly McNamara will be delighted with the display of his side after spending the last three years building for this day and yet looking like a man under pressure after the worst week of his career, as he was forced to deal with a major breach of discipline involving at least four members of his squad in the aftermath of last Saturday's humiliating defeat by Italy.

Debutants Brett Ferress and twins Tom and George Burgess all justified McNamara's selection calls and he could face a problem accommodating the axed James Graham in next week's group game against Ireland.

Certainly England could hardly have made a better start as they raced into a 10-0 lead inside the first quarter after enterprising captain Kevin Sinfield twice opted to run penalties in kickable positions.

He combined with James Roby and Rangi Chase to work the ball out to the left, where Hall collected Sam Tomkins' cut-out pass to score his 14th try in 16 matches for England.

Sinfield could not add the goal but his clever kick, off the inside of his right boot, helped create a second try for his side.

Australia centre Brent Tate allowed the ball to bounce and was then outjumped by Cudjoe, who managed to gather it and force the ball onto the line.

Sinfield's goal made it 10-0 and it could have been an even bigger lead, with George Burgess barging past three defenders to reach the line only for video referee Ben Thaler to ruled he had lost control of the ball.

At that the stage, the Kangaroos were looking vulnerable as England's aggressive defence forced them into a host of handling errors but the home side appeared to lose some of the fire when McNamara rotated his front rowers mid-way through the first half.

But there was already enough evidence of the lurking dangers from the playmaking trio of Cameron Smith, Cooper Cronk and Johnathan Thurston and the fightback began on 26 minutes when towering centre Greg Inglis, a constant scourge of England in the past, leapt above Tomkins to collect Cronk's high kick and put Thurston over for the Kangaroos' first try.

Thurston then got second rower Greg Bird over and his second goal edged his side in front.

The turning point came in the last minute of the half when Tomkins was released by the impressive Sam Burgess only to be brought back for a forward pass.

From the resulting scrum, Slater illustrated his danger in broken play by dummying his way past Cudjoe and sprinting 60 metres for a try.

Thurston's third goal made it 18-10 at the break and Australia tightened their grip on the contest three minutes into the second half when right winger Brett Morris took a pass from roaming left-winger Darius Boyd to score his 13th try in as many matches.

That followed a contentious decision by touch-judge Robert Hicks to award a scrum to the Kangaroos for a foot in touch by Josh Charnley - but England demonstrated superb character to stay in the game.

They pulled a try back on 50 minutes when George Burgess took Roby's pass close to line to romp over and Sinfield's second goal cut the gap to just six points.

Thurston eased Australia's growing anxiety with a penalty that put two scores between the sides and, as they sought to apply the killer touch, Tomkins put his body on the line to prevent Morris scoring a second try.

They finally clinched win when Boyd took Slater's pass to score his side's fifth try on 70 minutes but England had the final say when Charnley seized on a wayward pass by Slater to hack the ball on and touch down.