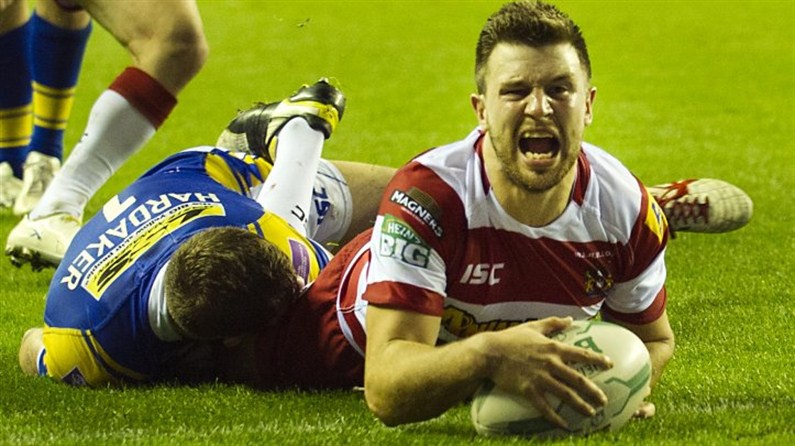 Wigan will face Warrington Wolves in the 2013 Grand Final following their 22-12 success over Leeds Rhinos at the DW Stadium on Friday night.

A close tense 50 minutes with the sides level before Wigan stepped on the gas to score three second half tries and ensure the victory as the Cherry and White now look for a Challenge Cup and Super League double..

A great end for a number of players who were playing on home soil for the final time.It was a last DW Stadium appearance for Sam Tomkins, Pat Richards and Lee Mossop as the trio all head to the NRL. The Warriors selected from strength with the exception of Sean O’Loughlin (Achilles) and Chris Tuson (Hamstring) who missed out on the chance to play in his final home game before moving on. For Leeds, Jamie Jones-Buchanan passed a fitness test after being a doubt all week but Brett Delaney was ruled out through injury.

It was Leeds with the first scoring chance after Wigan had been caught in possession in the first set of six. Ben Jones-Bishop with space on the right but he was unable to ground the ball amongst tight Wigan tackling with just a couple of minutes on the clock.

With 5 minutes gone Leeds were penalised and a great clearing kick put the Warriors deep in Rhinos territory. A quick move to the left and an inside pass from Pat Richards put Iain Thornley through for the try. Richards hit a superb goal from the touchline and the home side were 6-0 to the good.

Both sides gave their all it was end to end but defences were on top. Liam Farrell made a break to Jack Hughes who was held short at the other end Ryan Hall broke free on the advantage but ran out of options and space.

Pat Richards made a break down the left as the half drew to a close but Ian Kirke did well to stop the Winger in his tracks.

This was a tense, nervy affair and at the break only the one try and goal separated the sides.

Leeds came to life just four minutes after the break, Ablett breaking away from two tackles down the middle and he had support inside from Joel Moon who crossed for the first Leeds points of the game. Kevin Sinfield added a simple goal and the game was level at 6 all.

Wigan hit back on 53 minutes, Green with a short pass close to the line sent Liam Farrell over in front of the South Stand to the delight of the home fans. Richards added the goal and the home side again had a six point advantage at 12-6.

The home side it won, a Matty Smith grubber kick on the last was fumbled by Ablett and Darrell Goulding was on hand to dive on the loose ball on 59 minutes to score Wigan’s third try. Richards made it three from three and the home side were on their way to the Grand Final.

Leeds were not quite done, a superb pass from Burrow sent Moon away and he looked certain to score only for a sensational tackle from Harrison Hansen forced the ball from his hand as he seemed certain to give the Rhinos a lifeline back into the contest.

Wigan secured their place at Old Trafford with their fourth try of the game, on the final tackle, Matty Smith looked to be go for a one pointer and spotted a gap to race through. The Warriors kept the ball alive for Josh Charnley to get his 42nd try of the season. This time Richards missed the goal but Wigan were 22-6 to the good now.

Leeds scored their second try through Liam Sutcliffe on 77 minutes which Sinfield converted but it was little more than consolation for the Rhinos.

So Wigan will face Warrington Wolves next Saturday at Old Trafford in what should be a fantastic Grand Final. Well done Wigan Warriors.