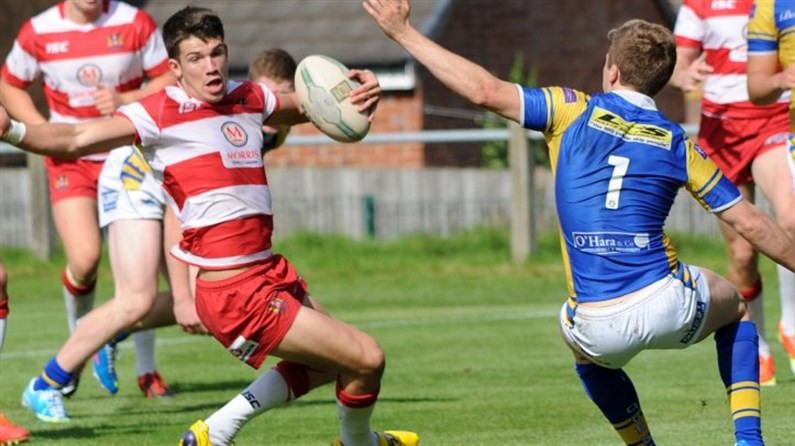 Wigan Warriors Under 19's face Leeds Rhinos this Saturday lunchtime at Headingley-Carnegie in the 2013 Grand Final. The game has FREE admission and has a 1pm kick off.

Wigan finished top of the table after the regular season and defeated Leeds at home in Week One of the Play-offs to reach the Final while Leeds defeated St Helens at home in Week Two 44-32 to book their place receiving a second chance in a Qualifying Semi-Final.

Looking ahead to the Final, Under 19's Head Coach John Winder told us,

"We are all looking forward to the game, Wigan and Leeds have been one and two in the competition all year and it should be a great contest.We have played them four times this season, once in pre-season, twice in the regular season and once in the Play-Offs and they have all been good contests. Fortunately in the last two we have managed to get over the line and have won reasonably comfortably in the end but they have been close for 60 or 70 minutes and we are expecting the same on Saturday."

Wigan had the luxury of a week off due to the Week One win and John admitted his side will benefit from the rest, he told us,

"We put a big emphasis on winning the week one game, the Under 19's in general is about preparing the lads for what's to come and if they make the First Team they will go through Play-Off campaigns and it is always better to win the big Semi-Finals and earn the week off. It has allowed us to do something different, we took the boys up to the Lakes and do a team bonding session. it was real good thing to do and was a bit of a reward for their hard work and that has put us in a good frame of mind ahead of Saturday. We have had a good week of training and hopefully we can go there and get the result."

Head Coach Shaun Wane has often this season praised the work of the under 19's staff for the quality of players they produce that fit into the First Team, which then makes coming top of the table a bigger success with so many called upon throughout the year to step up, John added,

"There have been weeks where 6 or 7 of the boys have been with the First Team Squad and that means other younger lads have been forced to play in our 19's, first year players, 17 year olds in an under 19's competiton which brings a challenge in itself. To do that and be consistent over 26 odd rounds is a real credit. To lose just three fixtures over the course of the season is pretty impressive."

Asked if Wigan were favourites to win the 19's Grand Final, John said,

"I suppose we are and people are expecting us to win but Leeds are a good team and they turned us over at Stanningley earlier in the year and quite rightly so, they were the better team. They have Academy Internationals in their side and players who have played First Grade as well. On their day they are a good side and we will need to be at our best to beat them."

Due to the unavailability of the DW Stadium the game is being played at Leeds and John thinks the players will relish this opportunity to play on this big stage,

"Obviously our first choice would have been to play the game at the DW but there is no dramas about that, we understand that isn't possible and for me the next best thing is playing at Headingley. It is a special game and it deserves to be played on a special ground. Headingley is a fantastic venue with great tradition and history and the boys will get an opportunity to play on the big stage and I am all for that. I am excited and grateful that Leeds have made the venue available and FREE for fans to attend, that's a great gesture."

Wigan go into the Under 19's Grand Final without the suspended pair of Lewis Tierney and Joe Burgess,

"They are two quality players, two International players who have played First Team and we will miss them. I feel for both of them, it has been a long year and they have played the majority of games but what they did two weeks ago they have to be punished and they probably got what they deserved due to their actions and it will give other guys a chance. Would I have liked to have had them? Course I would but that is not the situation we are in."

Finally on the game itself,

"Finals come down to desire and the will to win and that will be a big factor. In the last two meetings our forwards have been very physical and have matched what Leeds bring. I also think our Half Backs are key, last time we played ,both George Williams and Ryan Hampshire were outstanding and that made a big difference. I think first and foremost we need to meet that physical battle and the passion they will bring playing at home and if we do that I think we will have enough to get us over the line."

A reminder that admission at Headingley on Saturday is Free so get along to support theWigan Under 19's in the 2013 Grand Final.