Warriors and Rhinos set for Man of Steel Challenge 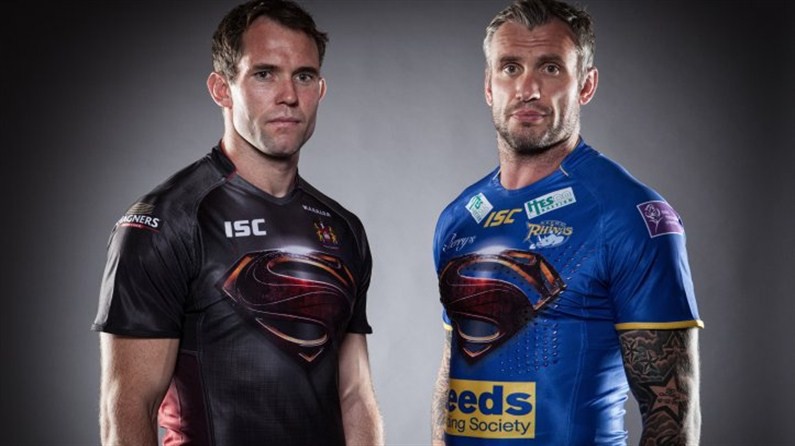 A FIRST FOR BRITISH SPORT AS WARNER BROS. HOME ENTERTAINMENT, SKY SPORTS, ISC SPORT AND RUGBY LEAGUES LEADING CLUBS PARTNER UP FOR THE BIGGEST MATCH OF THE SEASON

Wigan Warriors, Leeds Rhinos, Warner Bros. Home Entertainment, ISC Sport and Sky Sports have partnered for the ultimate display of human ability. Fans of Super League are used to being amazed by the supreme skills of the players on show but when Wigan clash with Leeds on Thursday 5th September at DW Stadium live on Sky Sports 2, both teams will bear the mark of the Man of SteelTM

The two teams will feature the famous Superman logo on the front of their shirts to celebrate the release of Man of SteelTM which will be available on Blu-ray 3DTM, Blu-ray, DVD from 2nd December and can be pre-ordered now. Man of SteelTM will also be available in the Sky Store from December..

The game kicks off the final round of games in the Super League regular season, a week ahead of the start of the play offs and the race to Old Trafford for the Grand Final to see who will be crowned Champions, with all the play off games live and exclusive on Sky Sports. Leeds have won five of the last six titles with only Wigan in 2010 breaking their grip on the Super League title.

Leeds and Wigan have met twice already this season, with the Champions taking the spoils at Headingley Carnegie back in March and Wigan snatching victory in a close contest at Manchester City's Etihad Stadium at the conclusion of the Magic Weekend in May.

The title Man of Steel has long been associated with Rugby League, and has a strong tradition within both Wigan and Leeds. The supreme player of the Super League each season is awarded the Man of Steel award, an honour that dates back to 1977 when Leeds captain David Ward won the inaugural title for the first time. Since then Wigan players have been crowned the game's ultimate player on more occasions than any other club with eleven. Wigan boast two Man of Steel winners in their side in Pat Richards and reigning holder Sam Tomkins, whilst Leeds star Jamie Peacock lifted the title in 2003. The last Leeds player to win the title was Iestyn Harris back in 1998, who is now on the Wigan coaching staff.

Wigan and Leeds' official apparel partner, ISC Sport, is producing a limited number of replica shirts per club for retail sale. The shirts will be available to pre-order from wiganwarriors.com and therhinos.co.uk from Saturday 31st August.

Fans coming to the match are also encouraged to dress up as their favourite superhero, with prizes for the best costumes. Plus fans should look out for promotions on both club websites to win exclusive Man of SteelTM merchandise in the build up to the big clash.

Tickets are available now for the game priced from £21 for adults and £15 for concessions. These can be booked by calling the Wigan ticket office on 0871 6633552 or the Leeds ticket hotline on 0871 423 13 15 (calls are charged at 10p per minute - calls from mobiles may vary). You can watch Wigan v Leeds on Sky Sports 2 from 8pm on Thursday 5th September.

"Man of Steel" is produced by Charles Roven, Christopher Nolan, Emma Thomas and Deborah Snyder. The screenplay was written by David S. Goyer from a story by Goyer & Nolan, based upon Superman characters created by Jerry Siegel & Joe Shuster and published by DC Entertainment. Thomas Tull, Lloyd Phillips and Jon Peters served as executive producers.