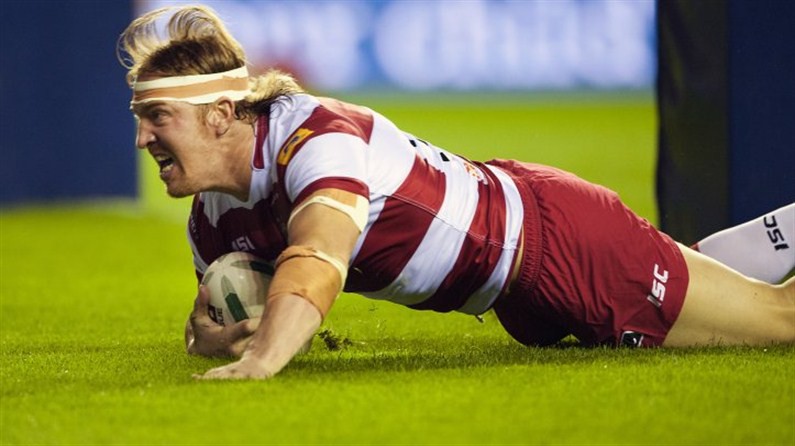 In a sensational game at the DW Stadium a young Wigan Warriors side were pipped 33-34 at the death by Hull FC.

Wigan had raced into a three try lead in the second half before the Black & Whites hit back, only for the Warriors to extend their lead and again be pegged back before both teams exchanged dropped goals to set up a tense last 60 seconds with the score equal. Man of the Match Ryan Hampshire had a drop goal charged down before Hull marched down field and Daniel Holdworth hit a 35 metre drop goal to seal the win.

Wigan Warriors were without a number of key players through minor injuries from the Cup Final whilst a number were also rested by Shaun Wane. Teenager Dom Manfredi made his First Team debut on the wing while several others had only figured in a handful of fixtures. Lewis Tierney was selected at Full Back, Joe Burgess on the Wing while Ryan Hampshire partnered Sam Powell at Half Back. The side was Captained by Chris Tuson for the first time while Welsh International Andy Powell was selected on the bench. Hull were without Gareth Ellis, Andy Lynch and Mark O’Meley while Aaron Heremaia was suspended.

Both sides made early breaks, Shaul for the visitors from a Tickle pass only for the ball to Whiting to be deemed forward and at the other end Jack Hughes was away but his pass behind found neither Tierney nor Thornley who were in support.

It was Hull FC that came up with the first score of the game, Wigan penalised for off side and from the next set a long pass from Daniel Holdsworth found Winger Jason Crookes in space and he squeezed in at the corner. Danny Tickle added a superb goal from out wide, 0-6.

Both sides tested each other out with defences on top before a rampaging run by former Welsh Rugby Union International Andy Powell on 23 minutes saw him crash over the line and brought the home fans to their feet, his first try in Super League and his first for the Club which was converted by Ryan Hampshire to make it 6 all.

Hull responded on 28 minutes to retake the lead, Tom Briscoe in at the corner for the visitors’ second try of the match following good work from Holdsworth and Yeaman. Tickle added the goal from out wide to make it 6-12.

On the other side of the pitch good tackling by Burgess and Thornley sent Crookes into touch as he looked for his second try.

On the stroke of half time Wigan drew level, a short pass from Logan Tomkins close to the line sent Ben Flower over for the home side’s second try of the game. Hampshire struck the goal to make it 12 apiece.

With just 20 seconds of the half remaining Wigan were in again, Gelling with the break down the right flank and he had Ryan Hampshire on his shoulder to race away for the try. This time the youngster missed the extras but the Warriors were 16-12 up at the interval and led the game for the very first time to the delight of the home fans.

Ryan Hampshire came close to scoring a sensational individual try as Wigan opened up Hull on 45 minutes, a great break and kick was almost re-gathered by the Half Back but he was just unable to pick the ball up as the Airlie Birds were stretched again.

It was only a matter of moments though before Wigan were in for their third try, Joe Burgess in at the left hand corner as the home side moved the ball swiftly from right to left and the Winger did exceptionally well to get his first try for the senior side. Hampshire was again spot on from the touchline and Wigan were 22-12 to the good.

A Sam Powell 40/20 set Wigan up again, this time Wembley try scorer Iain Thornley was on hand to capitalise on the loose ball for the Warriors fifth try of the game on 56 minutes, this time the conversion was missed, 26-12.

It looked like the home side were running away with it before Shaul made another of those telling breaks; Wigan were soon after penalised and Jason Crookes crossed for his second try of the game out wide. Tickle missed the goal, 26-16.

Within a couple of minutes the Winger Crookes was in for his hat-trick in the corner as a long pass out to the right split the Wigan defence and Danny Tickle’s goal brought it back to 26-22 and it was game on again as far as Peter Gentle’s men were concerned.

Hull stepped up the pressure and forced a goal line drop out as Manfredi was tackled behind the try line.

The Airlie Birds were on a roll and Wigan were penalised again which allowed Hull field position, Joe Westerman in for Hull’s fifth try to the left of the posts, 26 all, and Tickle missed a simple effort at goal that would have edged the Black and Whites ahead once more.

In a thrilling game a high kick by Sam Powell was allowed to bounce by Shaul and Anthony Gelling was on hand to claim the try on 70 minutes, the Warriors sixth of the game and Hampshire struck a simple goal to make it 32-26 in Wigan’s favour.

Hull were not yet quite done, Tom Briscoe in for a try on 75 minutes which Tickle converted 32-32 now the score.

Sam Powell and Daniel Holdsworth then exchanged drop goals but Hull ended up snatching the win thanks to a late Holdsworth one pointer in a dramatic finish.

The Wigan players were applauded off the field for a wonderful effort in a game they deserved much more from.