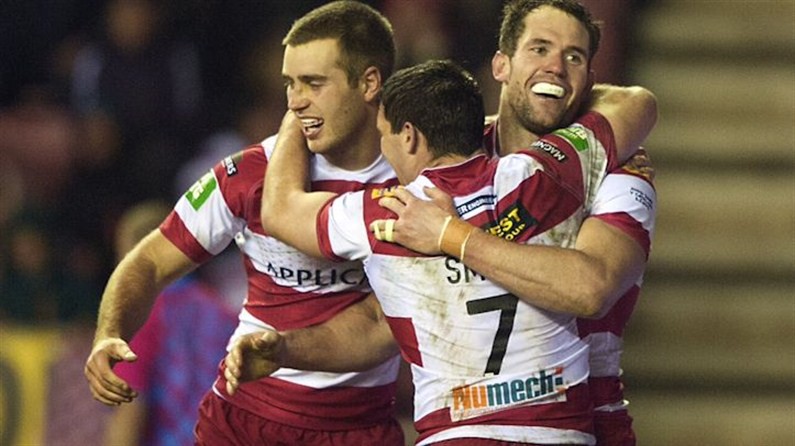 Result from the KC Stadium

Wigan made it six wins in a row in Super League with a 20-28 success against Hull FC at the KC Stadium on Friday night.

The Warriors have had a great record against the black and whites in recent seasons and this was their 8th win in succession against the Airlie Birds and their fourth in a row away from home. This was a real see-saw battle as twice Wigan opened up a two try lead only for the home side to battle back to make it into a real testing contest.

Sam Tomkins grabbed two tries, Iain Thornley and Josh Charnley were the other try scorers. Pat Richards, on the day it was announced he would be returning back home to Australia at the end of the season, hit four goals and two vital penalties to help seal a narrow win.

Wigan welcomed back to the side Blake Green, Michael McIlorum and Liam Farrell who all missed the Cup win over Leigh last weekend.

After a tense and tight opening 10 minutes it was Wigan with the first real opportunity as Blake Green found a gap in the Hull defence on half way to race through a gap. From a play the ball the Warriors spread the ball to the right to force a goal line drop out and from the next set a Sam Tomkins pass close to the line was enough to send Iain Thornley in for the game’s first try. Pat Richards added the goal and the visitors were off and running, 0-6.

Within a couple of minutes Wigan were in again this time Richards with a break down the left and as he ran out of space he intelligently kicked the ball on for Sam Tomkins to follow and dive on for the cherry and whites second try. Richards added the extras and Wigan were 0-12 to the good with two tries in two minutes.

Hull FC responded on 22 minutes as Winger Tom Lineham squeezed his way over for a try, Joe Westerman missed the difficult conversion, 4-12.

Wigan were tested as the try seemed to inspire the home side to turn the pressure up a notch and on a couple of occasions Hull pressed and with less than 30 seconds of the half left the home fans were rewarded with their second try as Ben Crooks was able to turn in the tackle and stretch over. This time Westerman added the goal and it was game on 10-12 at the break.

Six minutes into the second half and Hull were penalised inside the Wigan half and the visitors took full advantage with field position. Quick hands from left to right and a Goulding pass sent Josh Charnley in for the Warriors third try of the game out wide. Richards hit the conversion, 10-18.

And as they had done in the first half it was a case of two quick fire tries, this time Jack Hughes with the break down the middle to send a delighted Sam Tomkins through for his second try of the game under the posts, his 20th of the season in all competitions. Richards added the extras and Wigan now led 10-24.

A chip kick to the corner on 56 minutes and Ben Crooks was able to tip the ball onto Tom Lineham to open up Wigan on the left for Hull’s third try of the evening and Lineham’s second. Westerman missed from out wide, 14-24.

Hull were far from done and midway through the half, Lineham completed his hat-trick with a touchdown in the corner, this time Westerman hit the goal, 20-24 and game on again.

A successful Pat Richards penalty from 32 metres opened up a 6 point lead, 20-26 with just 12 minutes left. Richards hit a second penalty soon after, 20-28 to give Wigan some breathing space with just 8 minutes remaining.

This was a real hard fought win as Wigan extended their lead at the top of the Super League table.