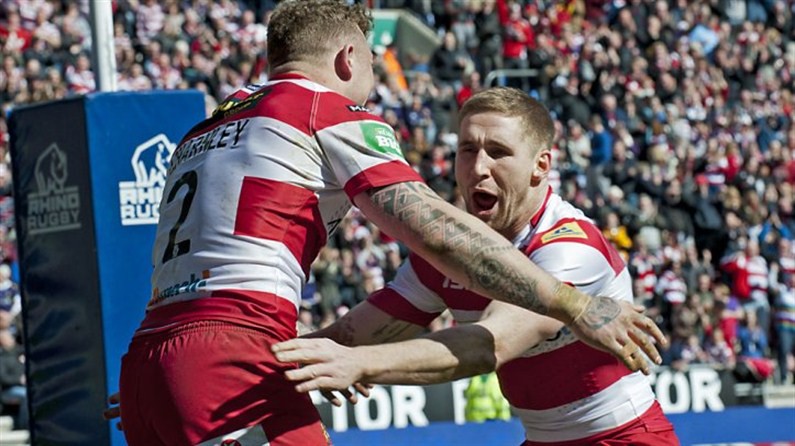 A Pat Richards brace proved vital as Wigan Warriors stormed to a fourth successive Good Friday triumph with a 28-16 win over St Helens.

The Warriors took a commanding 18-0 lead into the break but a stern second-half fightback from St Helens ensured Wigan were made to work for the league points.

Despite a first derby try for Dom Crosby restoring a commanding advantage for Wigan with 20 minutes to go, Saints still managed to ensure a nervy finish when a superb try finished by Tom Makinson started a comeback.

Saints started strongly and managed to find their way deep into Warriors territory but an early chance was wasted when a Paul Wellens pass intended for Ade Gardner went in touch.

But it was Richards who broke the deadlock in the tenth minute when Matty Smith and Blake Green combined well before Iain Thornley provided the vital final pass.

The move started when Smith sent Darrell Goulding through a gap in the defence to set-up the attack.

Richards nailed the touchline conversion to ensure a smooth start for the Warriors.

Tomkins put Wigan further ahead when Smith’s sharp pass allowed Jack Hughes to break through before drawing Tom Makinson which gave Tomkins an unopposed sprint to the line.

Wigan’s lead was further extended by Josh Charnley when he brought the crowd to their feet with a supercharged race to score.

Charnley found himself with the ball after Josh Jones’ high kick was allowed to hit the deck in Wigan territory, leaving the winger in a one on one race against Francis Meli.

Saints came out on fire for the second half with Tom Makinson making an early break which signaled the start of a period of dominance for the away side.

With Wigan desperately defending their line, Paul Clough muscled in with five minutes gone to get Saints off the mark.

It took a look from the video referee to make sure he got it down but this gave them confidence as well as a sense they were still in the fight.

Against the run of play, Wigan quickly found their way upfield from a 20 metre restart with 23 minutes left on the clock for Crosby to edge his way through from a typically pint-point Blake Green Pass.

But still Saints weren’t done and responded with two tries of their own to put them back into contention in the final fifteen minutes.

Following a sloppy penalty from the kick-off, Saints used the easy field position to send Meli over which was followed by Makinson’s score, coming from the best attacking rugby St Helens produced all afternoon.

Jordan Turner somehow managed to slip the ball away to Meli as he was being dumped into touch, leaving Charnley to hunt down the giant winger.

As Charnley closed-in Makinson’s enthusiastic support play meant he was in place to accept Meli’s pass and set-up a tense finish.

But Wigan had other ideas. Moving the ball effectively upfield once more, an audacious pass from Liam Farrell found Richards who put the game to bed with his second.