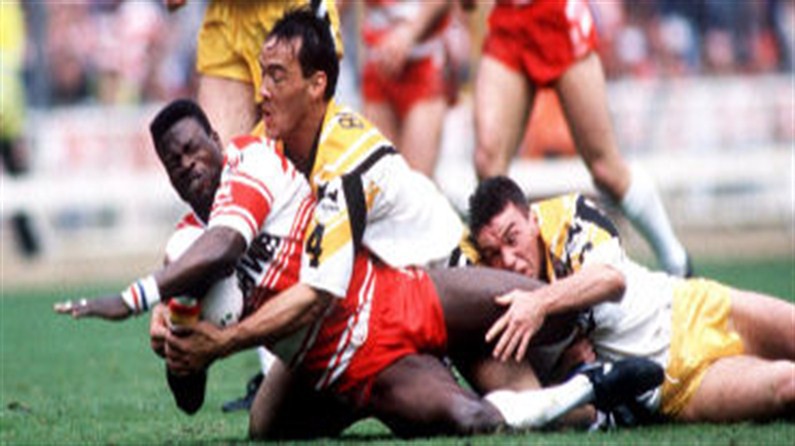 Rugby League World Cup 2013 has announced that Martin Offiah MBE will be an official ambassador for the tournament which kicks off on October 26 at the Millennium Stadium in Cardiff.

Offiah, known to many as ‘Chariots', will play a key role in promoting the game, especially in London ahead of the RLWC2013 semi-final double-header at Wembley Stadium.

"I'm really excited to be on board with RLWC2013 and eager to do what I can to ensure the British public know this is the next major international sporting competition in this country after London 2012 and an event not to be missed.

"There will be some really exciting matches at RLWC2013 including a double-header featuring England v Australia and Wales v Italy with the opening ceremony at the Millennium Stadium; a semi-final double-header at Wembley and the showpiece event, the Rugby League World Cup final, taking place at Old Trafford.

"Tickets to the tournament are extremely well priced with 55% £20 or less, so it really is a great opportunity to see some extraordinary athletes going head to head in their pursuit for glory."

The Wigan, Widnes, London Broncos, Great Britain and England legend will forever be synonymous with Wembley following his full length dash at the 1994 Challenge Cup Final.

He said: "I can't wait for RLWC2013 to start and I genuinely believe England have a realistic chance of winning."

Offiah's exploits at Wembley and part in Rugby League history have now been officially recognised and he will be represented alongside four other heroes of the game as part of a statue commissioned for Wembley Stadium by the RFL.

RLWC2013 General Manager, Sally Bolton, said: "Martin is one of the game's great players and to have him supporting RLWC2013 is fantastic news for us.

"As a recognisable figure even outside Rugby League, he can help take the sport to a new audience. Our aim is to put on the biggest and best Rugby League World Cup ever and we are confident we can do that."

Martin Offiah joins Gareth Thomas as an official ambassador for RLWC2013 which kicks off on October 26. For more information and to purchase tickets visit www.rlwc2013.com