Guide Dog Partnership with the Warriors 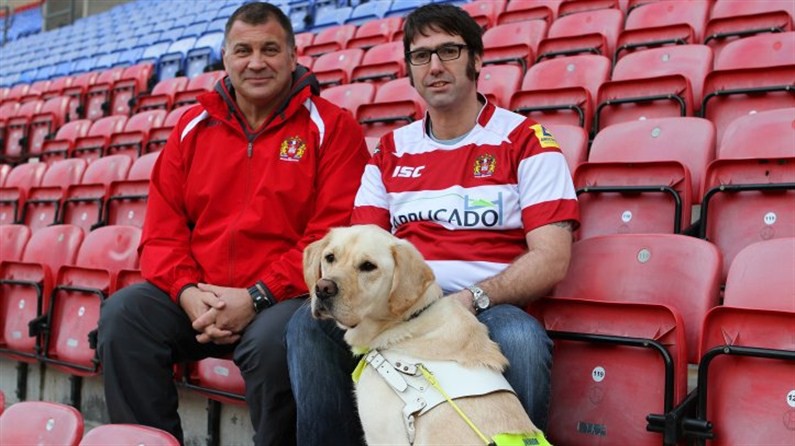 Life-long Wigan Warriors fan Andy Parkinson, with his new guide dog Farley are set to follow a season of Rugby League after becoming the first ever guide dog partnership to hold a season ticket at the club.

Andy lost most of his sight suddenly in 2002. Losing the ability to get around independently meant he literally stopped doing all of the things that he wanted to do. This had a devastating effect on his confidence and Andy slid into depression. Then in May 2011 Andy was matched with his first ever guide dog Farley, a Labrador cross Golden Retriever. Since the pair has been working together Andy has a new lease of life. Farley has given him the confidence he needed to get out and about independently again.

As a life- long Wigan Warriors fan Andy approached the club about purchasing a season ticket for him and his brother. The club were great, they invited Andy to come along with his guide dog Farley so him and his dog could familiarize themselves with the ground in preparation for match days. The club even gave him four seats for the price of two so there is extra room for guide dog Farley to lay down when he and his brother enjoy the match.

"Farley and I have become inseparable since we were partnered back in May 2011 and I wouldn't be able to go to the game without him."

"When we were contacted by Andy we were more than happy to do all we could to accommodate him and Farley. We hope they enjoy their season watching the Wigan Warriors."

The guide dogs service transforms the lives of around 4,500 blind and partially sighted people every year. To find out more about guide dogs please visit: www.guidedogs.org.uk