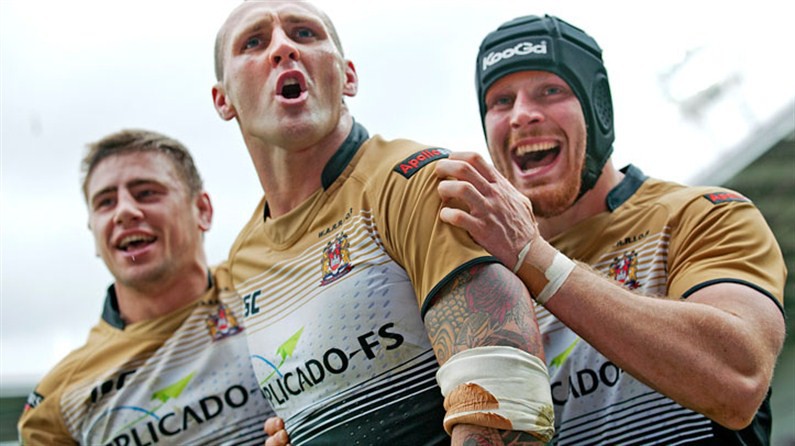 This is part two of our look back at the games of 2012, we concentrate on the months of April and May.

Wigan’s first visit to Langtree Park and the Warriors came away with a superb  win against arch rivals St Helens.Shaun Wane with an understrength squad produced a heroic 80 minutes of rugby to come away with the two Super League points.Shaun described himself as, “The proudest man in the North West,” following the victory.

Wigan made it back to back wins over the Easter weekend with a 36-6 win over the Wakefield Trinity Wildcats at the DW Stadium.

Played in pouring rain it was a game Wigan never looked like losing, three first half tries put the Warriors 16 nil up at the break.

Wigan turned in a perfect First Half performance to run out 12-56 winners over Hull FC at the KC Stadium.Hull threw everything at the Warriors but it was the visitors who ran in 28 unanswered First Half points with some world class handling skills and uncompromising defence. As the rain poured in the second stanza the intensity dropped slightly but Wigan continued to dominate to run out with an impressive victory.

Cup holders Wigan progressed to the Quarter Finals of the Carnegie Challenge Cup with a hard fought 16-32 win over Featherstone Rovers at the Big Fellas Stadium.This was a rough tough encounter as Rovers produced the performance of their lives and led 8-6 and 12-10 and even when Wigan opened up a 10 point lead Rovers kept battling to score a try to keep their hopes alive before a fifth Wigan try brought the lead back into double figures.

Wigan Warriors moved to the top of the Stobart Super League following their 36-22 win over Hull KR at the DW Stadium.Winger Josh Charnley grabbed a hat-trick, Anthony Gelling a brace in a seven try display. The Warriors were 26-0 to the good in as many minutes and from there on never let slip their grasp on the game.

Cup Holders Wigan moved within eighty minutes of a return to Wembley with an 18-4 win over St Helens in the Carnegie Challenge Cup.Saints scored first but after that never really looked like winning the tie. The Warriors took their chances in attack and defended superbly as St Helens struggled to find a way to score further points to pressure Shaun Wane’s men.

Wigan moved two points clear at the top of the table with a 12-32 win over second placed Huddersfield Giants at the Galpharm Stadium. Played in constant rain it was a game Wigan were in control of scoring seven tries to the Giants two with a brace for Josh Charnley and George Carmont.

Wigan made it three from three against St Helens in 2012 with a magical 42-16 success in the sunshine at the Etihad as part of the Magic Weekend. A convincing Wigan win but the game will also be remembered for a coming together early in the second half which saw three players shown red by Ben Thaler, two from Wigan and one from Saints.

Sam Tomkins grabbing one of his tries at the Magic Weekend.