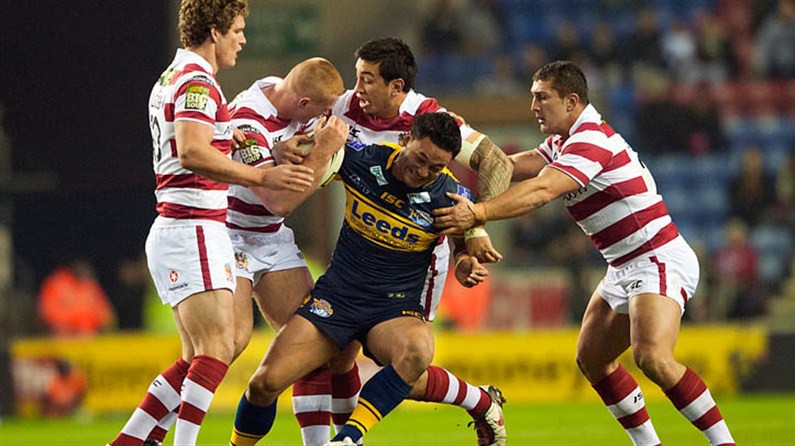 As 2012 comes to a close we look back on the season that was Super League XVII, a year which saw Shaun Wane take charge of the Club for his first season as Head Coach, the winning of the League Leaders' Shield for the second time in three years and the continued development of talented young local players coming through to make their First Team debuts.

It was a season which ended with Wigan top of the table and recorded 25 wins from their 33 games in all competitions. There was some terrific action and some stand out performances both as a team and individually.

Over the next few days we will look back at the action on the field, we start by going back to the beginning of the season and the start of the 2012 season.

A disappointing start to the year saw Wigan defeated in the first game of the season by a determined Huddersfield Giants side.

The Warriors kick started their season with a great win over the Super League Champions, Josh Charnley crossed for a hat-trick. Jack Hughes made his first start at centre for the injured George Carmont and Tom Spencer made his First Team debut off the bench.

Wigan cross for 10 tries in a comfortable win, Pat Richards with a try and 6 goals moved upto 3rd position in the Club's All Time Points scoring table.

The Warriors made it two wins in a row on Yorkshire soil, Sam Tomkins made is 100th appearance for the Club.

Wigan make it four wins on the bounce with a professional display against a talented Catalan side.

One of the shock results of the season as Wigan lose by a point against the Vikings at the Stobart Stadium. Wigan twice let big leads slip.

Wigan run out winners despite a resilient fight from the Broncos, the visitors leading 18-6 at one stage.

Wigan are narrowly defeated in a thrilling local derby in front of over 21,000 fans. Both sides grab three tries apiece. Harrison Hansen makes his 200th appearance for the Club.

The Warriors are comfortable winners at the City of Salford Stadium, leading 30-8 at the break, Sam Tomkins and Darrell Goulding score a brace of tries.The Warriors are 4th in the table.

A fantastic atmosphere at the DW Stadium for the visit of the Wolves on the 23rd March.