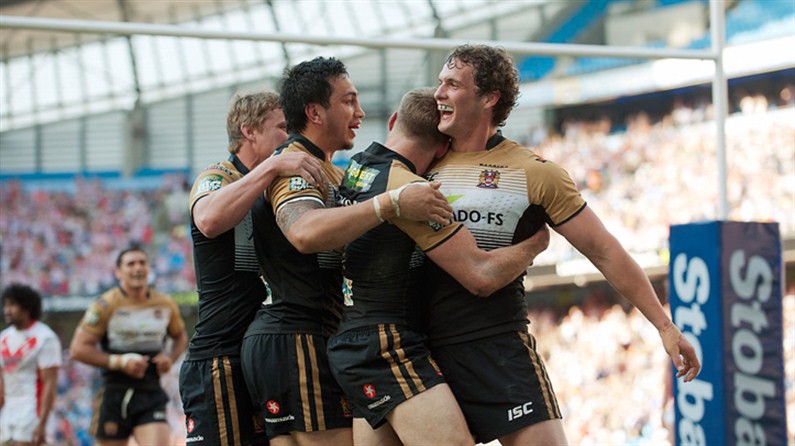 Wigan made it three from three against St Helens in 2012 with a magical 42-16 success in the sunshine at the Etihad on Sunday evening.

A convincing Wigan win but the game will also be remembered for a coming together early in the second half which saw three players shown red by Ben Thaler, two from Wigan and one from Saints.

In front of nearly 33,000 Rugby fans Wigan put on a fine display of slick handling particularly in the first forty as the Magic Weekend came to an end in what was a fantastic weekend at the home of the Premiership Champions.

As they had done twice before at Langtree Park and at the DW in the Challenge Cup Wigan were able  to blow Saints away. Six first half tries as the Warriors were simply on fire and on form like this anyone in the competition will struggle to keep pace. The cherry and whites added a couple of further tries after the break and it was a job well done.

This was Wigan 10th win in a row and the two points put the Warriors back to the top of the table following the Wolves win on Saturday which had taken them to the summit of the competition for just 24 hours or so.

Table toppers Wigan made just to the side that won at the Galpharm Stadium last Friday, the Warriors welcoming back Epalahame Lauaki on the bench, the Tongan missing the win over Huddersfield following a heavy knock in the Cup meeting with Saints two weeks ago, Dom Crosby the unfortunate one to miss out. For Saints Ade Gardner replaced Tom Makinson on the wing and Shaun Magennis was chosen on the bench ahead of former Warrior Mark Flanagan.

Wigan took the lead with their first attack and a great break by Brett Finch in the middle opened up the Saints defence, the stand off had options either side and Sam Tomkins took the pass on his right shoulder to stroll over under the posts. Josh Charnley added an easy conversion to put the Warriors 6 nil to the good.

Wilkin looked to try and create something for Saints on 10 minutes but his inside kick on the final tackle came to nothing and the ball went dead.

Within seconds at the other end, a short pass and Gareth Hock came running through at speed to leave Paul Wellens on the floor and Wigan were in for their second try of the evening, Charnley made it two from two, 12 -0.

On 18 minutes Wigan were in again, great handling, McIlorum first with a run from dummy half held short, ball out to the right and delightful hands as Goulding fed Josh Charnley for the touchdown in the corner, this time the winger missed the extras, 16-0.

Wigan were on fire and on 20 minutes were in once more, a quick move to the right, Sam Tomkins at pace to score his second try of the game on the outside, Charnley added the extras, 22-0 in as many minutes.

The Warriors were five tries to the good just a minute or so later, another sweeping move down the right, Goulding and O'Louglin combining with quick passes to send in the Wigan skipper, this time Charnley missed the goal, 26-0.

With four minutes of the half there was at last something for the Saints fans at the other end to cheer, a Paul Clough try from a Lomax off load, Lomax added the goal, 26-6.

With the last move of the half and the hooter sounded Wigan were in again, quick movement to the right, a delicate Goulding kick and Charnley in for his second try of the half and the Warriors 6th, he missed the goal, 30-6 at the interval and Shaun Wane's team in complete control.

Wigan continued after the break, George Carmont breaking away from two defenders from deep inside his own half to race away for the Warriors 7th try of the game, Charnley missed the extras, 34-6.

The game bubbled over on 50 minutes as three players were shown red following a flurry of punches, Hock and Tuson were sent to the sidelines from Wigan as was Magennis of Saints, so the Warriors down to 11 and Saints to 12. The whole incident was also put on report by Ben Thaler.

Saints were awarded a try benefit of the doubt as McCarthy-Scarsbrook raced over, Lomax missed the goal, 34-10.

Charnley missed a penalty as he slipped as he stepped up to take it on 62 minutes but made amends a few minutes later to make it 36-10.

Wigan made sure of the win despite the lack of numbers as Charnley sped away down the right to feed Liam Farrell for the try, the Warriors 8th of the game under the posts and this time Josh added the conversion, 42-10 as the game entered the final ten minutes.

Saints added a further try from Wellens which Lomax goaled on 75 minutes, 42-16 and that's how the game ended.