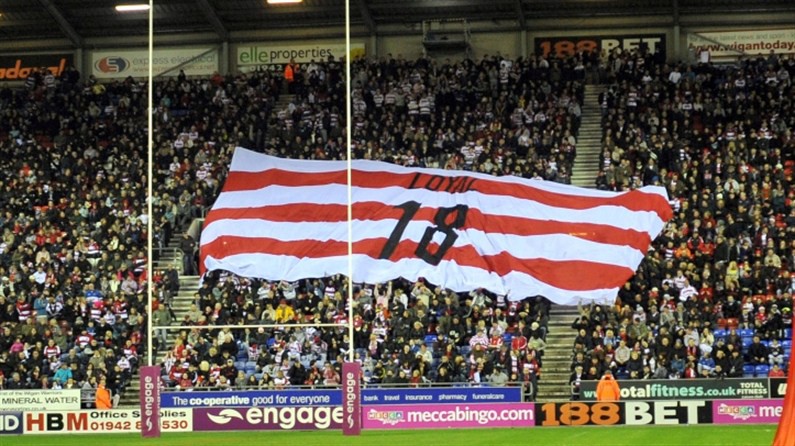 Wigan Warriors are delighted to announce that over 10,000 fans have already purchased their 2012 season ticket ahead of the new Stobart Super League Season which kicks off in just over a week's time on Sunday 5th February with a home game at the DW Stadium against Huddersfield Giants.

The figure is a stand out landmark as Wigan continues to be the best supported Club in the competition with an average of 16,124 for the 2011 season.

Season tickets provide huge cash savings over match by match admission, guaranteed entry to see all of the Warriors home Super League matches including the fixtures against Warrington and St Helens which are sure to sell out, a 50% discount on Magic tickets, priority on Cup, Play-Off and Final Tickets as well as host of other special benefits.

"There is a massive excitement building ahead of the start of the new season amongst our supporters and everyone is looking forward to the campaign under new Head Coach Shaun Wane.

"We are on course to create a new record by selling over 11,000 season tickets as Warriors fans yet again show their fantastic loyalty and recognise the great benefits of owning a season ticket.

"Season tickets represent excellent value and provide a host of advantages which include a ticket exchange if you are forced to miss a game and a take a mate for free offer which is available at the home opener against Huddersfield. It's great to see so many of our fans taking advantage by purchasing a season ticket."

Season tickets are available from the DW Stadium Ticket Office or by calling the Ticket Office Hotline on 0871 66 33 552.(calls cost 10p from a BT landline, other operators will vary.)

Adult prices start at just £231 with junior season tickets available from just £26, which includes ground admission to all home and away Super League games for 2012.