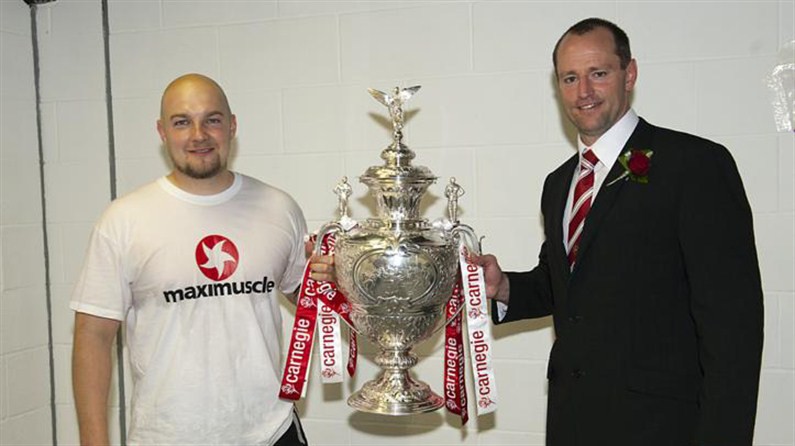 England coach Steve McNamara has added to his backroom team, ahead of the forthcoming Gillette Four Nations, with the appointment of highly-rated Wigan Warriors' Head of Sports Science, Mark Bitcon.

Bitcon, who will continue in his full-time role at Wigan, will become England's Performance Manager and will be a pivotal member of McNamara's staff in the build up to this autumn's internationals.

"We are delighted to have been able to add Mark (Bitcon) to our already experienced staff ahead of the Gillette Four Nations," said England coach Steve McNamara.

"Mark is up there as one the best in his field and has been one of the main influences in the resurgence of Wigan Warriors over the past two years. I would also like to thank Wigan chairman Ian Lenagan and coach Michael Maguire for allowing Mark to be part of the England set up and their full support of developing the national team.

"Preparations for the Gillette Four Nations have been ongoing for the past nine months and we are gradually making real progress behind the scenes. With the added influence of Mark's experience and knowledge, our players will have the best physical preparation enabling them to fulfil their objectives going into the tournament."

Bitcon, who joined the Warriors in 2009 following nine years of experience in similar roles in rugby union, football and the NFL, is relishing the prospect of being involved in the England set up.

"It is a great honour to be part of England's preparations in the build up to the Four Nations," said Bitcon.

"I would like to thank the Wigan club, especially Head Coach Michael Maguire and Chairman Ian Lenagan, for giving me permission to be part of this special group of people. I am looking forward to working with Steve McNamara, who has impressed me with the systems he is implementing to take England forward.

"We have some fantastic players at our disposal and I'm looking forward to working with the Elite Training Squad to make sure we fulfil our potential and become a real threat at international level.

"I have met a large proportion of the squad in my role at Wigan and obviously I work on a daily basis with the Wigan players that are in the international set up. The signs are very positive and with the influx of some of the younger players making the grade at the highest level our international future looks very promising."

Tickets for the 2011 Gillette Four Nations can be purchased by calling 0844 856 1113 or by visiting www.rugbyleaguetickets.co.uk. Ticket prices start from £10 adults and £5 concessions.