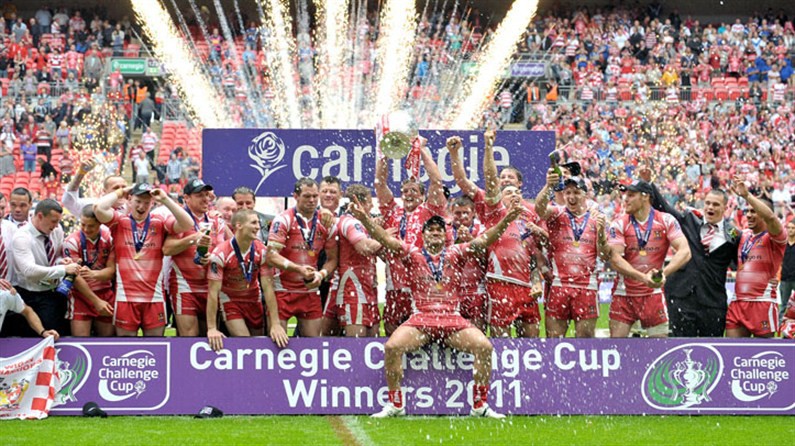 Wigan Warriors won the 2011 Carnegie Challenge Cup with a 28-18 success against Leeds Rhinos at Wembley Stadium on Saturday afternoon.

Wigan won their first Challenge Cup in 9 years, their 18th in total, in a pulsating game which hung by a thread right until the end.

The Warriors raced into a 16-0 lead before a Leeds fight back got it back to 16-14. A brace from Lance Todd Trophy winner Jeff Lima and tries from Josh Charnley, Joel Tomkins and late on from Thomas Leuluai sealed the historic win.

Wigan Warriors welcomed back to the side Brett Finch, Lee Mossop and Andy Coley who were all rested against Bradford in Super League last week, Darrell Goulding and Gareth Hock the unfortunate pair to miss out from the named nineteen.

Leeds included both Kallum Watkins and Carl Ablett in their side who have had injury problems in the build up to the Final.

Wigan started like a house on fire, Hoffman with a great break down the left, Webb able to stop him in his tracks.

On 8 minutes, Wigan grabbed an early try, quick hands to the right and the Rhinos just ran out of numbers, Joel Tomkins sending Josh Charnley in at the corner. Richards missed the conversion but a great start for the cherry and whites, 4-0.

On 13 minutes the Warriors came close again, a high Finch kick to the corner, Pat Richards just unable to gather the ball in an aerial battle with Jones-Bishop.

Wigan lost the services of Lee Mossop after a short spell on, the prop headed down the tunnel for treatment returning ten or so minutes later.

On 23 minutes, Wigan were in again this time under the posts, Jeff Lima with the try. A high bomb kick was dropped by Brent Webb and a short pass from Prescott sent his fellow prop in for the Warriors second try, this time Richards added the goal and Wigan were 10-0 to the good.

A simply sensational try was soon to follow on 28 minutes as the Tomkins brothers combined, Sam with a weaving run across the back and Joel with a break away from 50 metres as he showed both pace and power to leave the Rhinos defence in his wake. Richards hit the extras, 16-0.

There was at last something for the Leeds fans to cheer, Sinfield involved in the move twice, Jones-Buchanan then Ablett sending in Ryan Hall in the corner. Sinfield's attempted conversion hit the posts, 16-4.

Within a couple of minutes the Rhinos were in again, Burrow causing problems close to the line following a Jones-Buchanan break. Jones-Bishop doing well to turn in the tackle to ground the ball out wide under pressure from both Carmont and Richards. This time Sinfield hit the goal, 16-10 and that was the score at the interval.

The next try was vital and it was Leeds with the pressure and the try on 55 minutes through Carl Ablett, that after Hoffman had knocked the ball on close to his own line. Ablett managing to turn away from both Joel Tomkins and Liam Farrell to touchdown. Sinfield missed the goal, 16-14.

Wigan responded almost immediately, Mossop with a short pass to Lima who grabbed his second try of the game, Richards goal made it 22-14.

The Rhinos were not done and with just under ten minutes left, Hall was in for his second in the corner, Sinfield missed a difficult conversion, 22-18, with a tense nervous finish to follow.

Wigan guaranteed the win with seconds remaining, Tommy Leulaui with a try that went to the video referee, Richards added the goal and it ended 28-18.

A fantastic performance and an afternoon to remember for Wigan and their huge army of fans.